Today on Graemsay we had....nope not a cookery class but a plant dye course! It was run by Daphne of Graemsay and co-hosted by Julian Branscombe of the Scapa Flow Partnership who funded the course. Several folk from Graemsay attended and about a dozen folk from the Orkney Mainland and further afield. Thankfully the forecast rain held off and we all had a lovely day, starting with a walk up from the pier.

Julian showed us various wild-flowers and described some of their uses such as herbal remedies, eating, or for use as plant dyes. Daphne provided the expertise on what parts of which plant to use for various colours in plant dyeing. We were also warned about not digging up roots/bulbs of rare plants to experiment with! Mostly we were looking at the common wild flowers that abound in the UK. 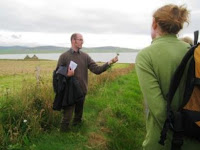 Slowly we wound our way along the road up to the Hall (watched by the neighbours!). 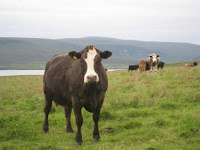 We found many wild flowers and plants just along the road verge. (below a blurred Grass of Parnasus 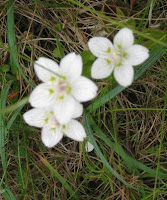 After a brief stop for lunch in the island community hall we got on with the business of dyeing. Daphne described how she had spun the wool (from a local fleece from a Shetland sheep), soaked it in a "mordant" which is used to help the dye stick, and then let us experiment with the different plant dyes. Various "mordants" are used - mostly natural (eg rhubarb juice) and some chemical.

This is Shetland wool that has been treated with a "mordant" prior to being dipped into the plant dye.

Voila! Looks like spaghetti but is in fact some of the wool above after being in one of the dyes. 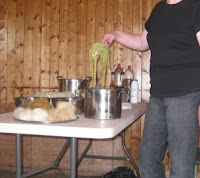 It was fascinating to see the different colours coming through. Interstingly, a blue flower may produce a yellow dye, and plants will give different colours during the various seasons. My favourite was the crow-berry which dyed the wool a beautiful soft pinky-purple, the colour of heather. The heather dye came out more yellowy-green! Below is the finished product with the various "witches cauldrons" of dye behind. 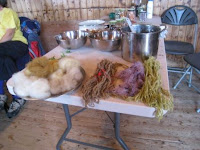 I'm not a "craft" person but I was just fascinated to see the process and many of those attending had clearly experimented themselves and were keen to learn new things. I think all of us learned something and it was a fun day (and there were home-bakes too!).

It's easy to see how witches got a bad name - we were all standing over "cauldrons" with steaming liquid in them and making wool change it's colour! Hubble, bubble etc......

Some of the wild flowers on Graemsay 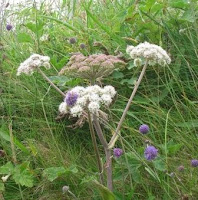 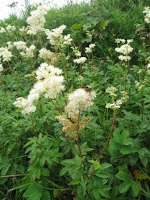 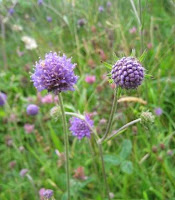 Hmm need to refer to my plant book for this one too! 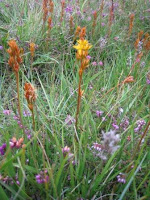 "The Wheels on the Bus go round and round..." 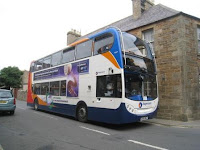 ... to quote a well known children's song and by way of introduction to... A Bus. You have to bear with me on this - I live on a small island (with no buses) and although the Orkney Mainland has buses, they are mere single decker models - therefore no fun at all! However for one month only, the bus company have brought a "double-decker" bus to the Orkney Mainland which runs the regular bus route from Stromness, through Kirkwall to St Margaret's Hope in South Ronaldsay.

And today I went on it *and* sat upstairs in the front seat! That was always a treat when I was a kid on the bus to the local town, and on journeys around London (except when commuting - too much effort required to get up and down stairs in a hurry!).

It was great seeing the countryside from the "top deck" - quite a different perspective than from "down below". It also gave me a chance to look at the scenery properly, which when driving I'm not able to do. Interesting seeing the topography and more detail of the settlements along the way.

The best bit was going over the Churchill Barriers which were built during WWII as protection for the naval fleet that was anchored in Scapa Flow. These barriers now link up what were then small islands and are know known as "the linked South isles". From the top of the bus it was possible to see the road snaking from one barrier to the next and getting a feel for the connections between the islands. The barriers also felt much narrower than usual. The sea was flat calm today but imagine crossing these in a winter gale (in really bad weather they are closed, once again making the "linked isles" wee islands again). 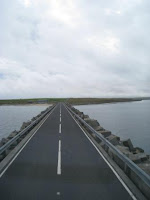 As you can see, "double-deckers" aren't really suited the the narrow streets of the towns! 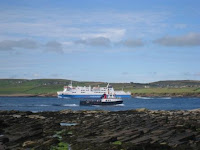 I was only saying the other day that in the summer there's so much going on I don't have time to blog and in the winter when I have more time there's not much to say! So I'm kind of catching up with this post. A few weeks ago some friends visited from London and we went down to the beach at Hoy Low, on Graemsay. I was just in time to catch the "ships that pass in the day" - the MV Graemsay sailing into Stromness as the MV Hamnavoe sailed out on her way to Scrabster in the North of Scotland.

I've mentioned the beach at Hoy Low before in wartime relics, and talking about the geology and the "old tales" about the stone structures, but this beach has other fascinating "treasures". 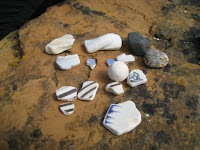 This may look like any old broken china, but is in fact likely to be china from the wreck of the "Albion". This ship was en route to New York from the UK port of Liverpool in January 1866 when it was lost in a gale just off the Point of Oxan at Hoy Low. There were 43 passengers, 11 lost their lives. Part of the cargo was china from the potteries in the North of England being sent to the US. Some of it was unglazed, some of it already glazed and patterned. To this day you can find bits and pieces of the china washed up on the beach at Hoy Low. The tiny ball in the centre of the picture may have come off a tureen or be a teapot knob? In the past I have found pieces which look like fruits - lemons, oranges etc. I shall have to find them and post a photo of them.

On the way to the shore we passed these inquisitive beasties. 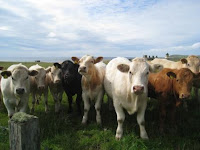 Below are the Hoy Hills seen from the road leading to Hoy High Lighthouse on Graemsay (note - the lighthouses on Graemsay are called Hoy High and Hoy Low because they are in the Hoy Sound, even though the island of Hoy is behind us - are you keeping up? I'll ask questions later!!).