Firstly I want to say Hallo to children at Michelsberg Grammar School in Geislingen. One of the classes wrote to me because in their English class they are learning about the Orkney islands and came across my blog. It was a lovely surprise to receive their letters.

The days are slowly getting longer. Thankfully it is getting a little lighter in the morning. Sunrise is now at 0839am, and sunset at 1609. I was at the pier waiting for the boat earlier this week and took these pictures of "dawn breaking" at 8.15!

The weather has been changeable here but thankfully milder with no snow or ice. But we had strong winds during the week so I haven't been out much and therefore not much else to say today!

Below is Hoy High lighthouse with the lights of Stromness in the background. OK I got some pole thingy in the way of the lighthouse but it was cold and I was barely awake.....

Email ThisBlogThis!Share to TwitterShare to FacebookShare to Pinterest
Labels: sunrise 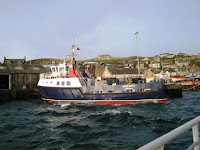 Our wee boat which has been away for "lengthening" (I'm not allowed to call it a "cut & shut" job!) has just returned from the shipyard after an absence of three months. So above is a photo of the "new boat in Stromness harbour, and below is a photo of how it used to look. The new longer boat can carry more cargo. However the claim that it can carry a "15 tonne lorry" is amusing some island folk - the Graemsay pier isn't a "ro-ro" pier so everything will still have to be lifted on and off by crane, which won't be able to lift a 15 tonne lorry! But as I say it can carry more cargo, more cattle pens, sheep pens etc and is apparently more fuel efficient. 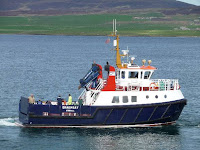 For the three month departure the "MV Golden Marianna" has been in service. This usually takes school kids back and forth between two of the Northern Isles (Westray and Papa Westray) but in it's absence the kids have had to be flown to school each day and home again! So "Papay" will be glad to have their wee boat back too. And I have to say I shall be glad to see it go - it's an OK little boat but not good for our pier in bad weather or a gale, and it's not so easy for it to dock at the pier or for passengers to get on and off. See below........ at least we HAD a service - but we're all glad to have our proper wee boat back! 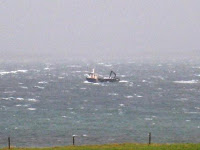 So we've had a rapid thaw, just some ice and snow clinging to the Hoy and Orphir hills. But now we have gales, with severe gales forecast for the weekend - sigh. It's been windy off and on this week and we had no boats on Wednesday. The ferry came this morning but other sailings are likely to be cancelled today and tomorrow. So there's nothing for it but to hunker down in the warm and wait for it go calm down.

I did manage to get out to feed the hens by keeping in the shelter of the garden dyke, and made it to feed Charlie Boy in the barn - though he had to go with just a quick pat on the head, as I threw the food on the floor and fled back to the warmth and safety of the house. I had thought I'd take the car down to the barn for shelter but the wind whipped the door out of my hand and back on it's hinges. It took a whole lot of effort to shut it again and I think it's dropped a bit but at least it still shut (most cars end up with "Orkney doors" after a few years of gales)! Won't be trying THAT again.

The sheep in a nearby field have found some shelter from the wind behind the lighthouse dyke. 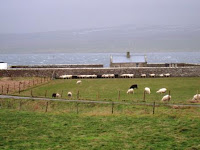 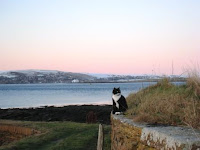 Both Button and I felt like some fresh air today, so went for a short walk to the beach below the house. However there was still a lot of ice around and I think Button would have preferred hunting in the byres to walking on the beach! The snow is slowly disappearing from the Orkney Mainland but still a lot of ice about apparently. Graemsay is green again but large frozen puddles are still in evidence. This photo was taken about 3.30pm with the setting sun reflecting pink in the sky above Stromness. The days are slowly getting longer........
Posted by Sian at 18:36 4 comments: 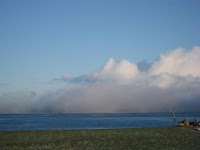 OK the photo above probably doesn't look much different to the photo in my previous post. But if you click on the photo to enlarge it you will see that the cloud in the foreground is a light grey and sitting on top of the sea - and this isn't actually cloud, it is, apparently, something called "artic sea smoke". Well really it's a sort of sea fog but it occurs above the sea when there is ice floating on the sea (or presumably the sea is very cold) and the air is stable and cold. It was amazing to watch this rolling up Scapa Flow the other day. Wonderful, weird weather!

Thankfully a bit of a thaw is finally setting in. Yesterday there was a lot of dripping and it's continued today. Unfortunately at night it freezes so is pretty lethal underfoot (or tyre). I'm not venturing too far until it clears. Though I did go over to Stromness yesterday having got a lift from a neighbour with a 4-wheel drive car to take me to and from the pier. The pier in Stromness was very slippery, but the main street in the town was fine and I stocked up on some fresh fruit and veg (don't want to get scurvy), plus one or two goodies, caught up with a friend or two and then returned home to hibernate again till the weather warms up!
Posted by Sian at 16:52 2 comments:

Sorry for the lack of posts - I've not been around for a few days. I was unwell just before New Year and as we didn't have a ferry for the 1st & 2nd of Jan I decided to go and stay with a friend in Stromness. I spent a quiet night snug and warm by a fire on Hogmanay (New Year's Eve), while others went out to the Pier Head at midnight where the boats hooted horns and there was merriment and singing of Auld Lang Syne etc before folk headed off for first-footing.

In Scotland there are two days of public holidays to allow people to celebrate the new year - it's taken very seriously, with lots of the Scottish water passed around.

Anyway I'm back home now and getting back into the usual routine. The weather is icy. We don't have much snow on Graemsay, but lots of ice and today there is an icy northerly wind. However the Orkney Mainland is still under a blanket of white, partly snow, mostly just frozen snow and ice. The pavements in town are quite trecherous, and the roads aren't much better. I shall try and stay nice and warm indoors till it passes but it is getting very tedious now. It's been like this for two weeks and the forecast is for it to continue into next week. It's very unusual for such a cold icy spell to last this long in Orkney. Our winters are characteristically mild, wet and windy!