A lot of weather about...

There's been a lot of weather about this last weekend.  In the end Orkney fared far better than many other places on the North-East coast of Scotland and England.  We had a North-Easterly gale in Orkney, which is an unusual direction for such a fierce wind. It lasted for a couple of days, together with torrential rain and hail.  But Orkney is used to gales even in Summer and so most things are perpetually tied down - sheds, hen houses, wheelie bins, though not always trampolines..... ahem....

Anyway all is ok here with me.  I'm just not venturing far which is nothing unusual for me from November to March!  I hibernate, or at least go into sloth mode.  I did venture to Kirkwall last week for my covid booster and a chance to catch up with some friends (socially distanced as we had a large -for -Orkney spike in cases recently). But mostly I'm staying close to home.

Anyway the above photo was taken from the Stromness side of the water by Charlie Groundwater who daily walks along the shore.  This one shows an awful lot of weather over Graemsay, Hoy High (and me next door).

And (like a well know online retailer) "you might also like" this short video of Stromness uploaded in April 2020 but shots taken during the preceding year.

A walk to the beach - with Button!

I'm delighted to say Button is responding well to her anti-inflammatory meds and is venturing forth a bit more again.  We had our first walk to the beach in some time. Partly due to the weather and partly her reluctance to go that far.  She is still a bit wary going out - she knows she can't run or climb out of the way of the Graemsay bears and wolves - well that's her story.... 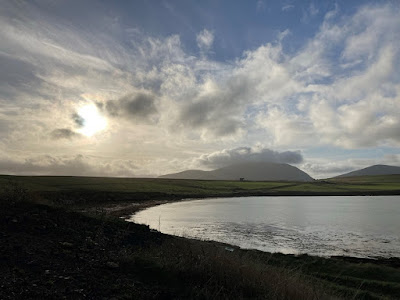 A seal popping its head up at the end of the old lighthouse pier.... 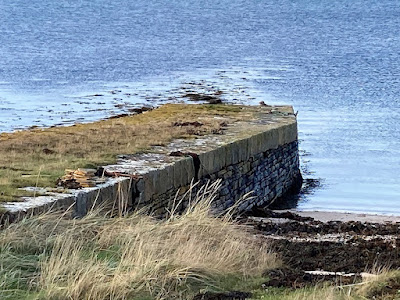 You need to click on the photo to see a larger version but there ARE seals in this photo on the rocks - very well camouflaged.... 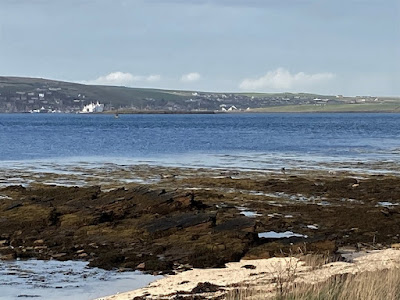 Button inspecting the creels for any partans (crabs) left behind. 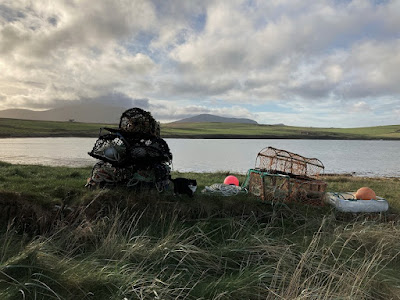 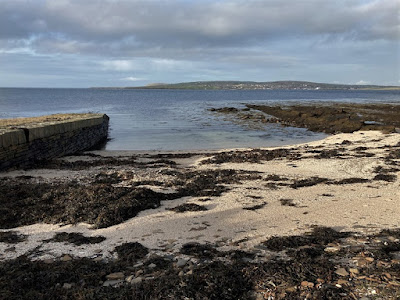 Button is less than keen on seaweed.... 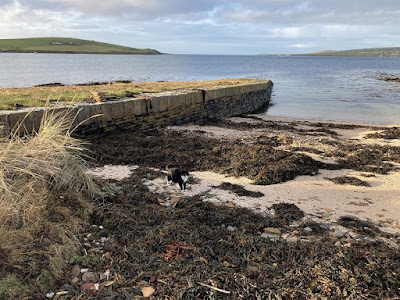 Wonder what she is thinking? 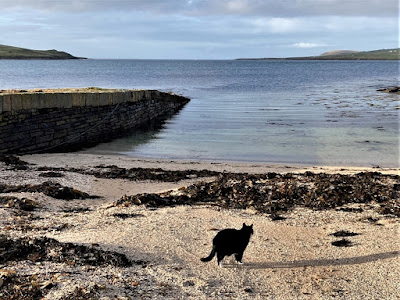 On the old lighthouse pier.... 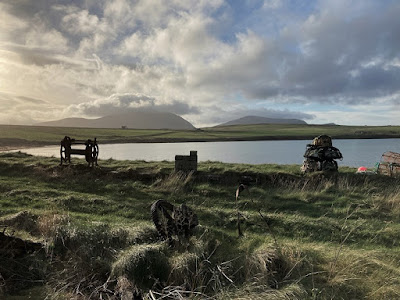 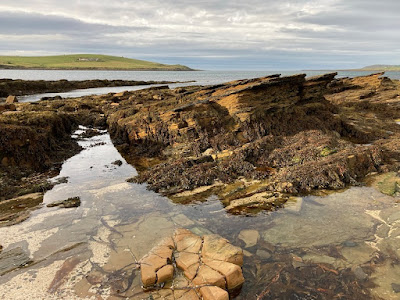 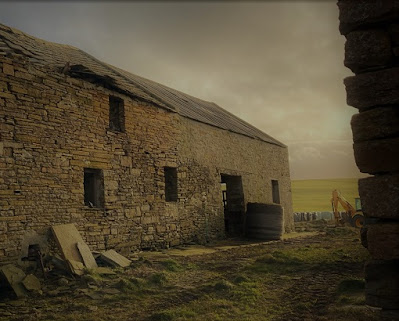 Slime mould - bit sinister as it can move across the grass.  Common name - Dog vomit slime... you can see why it's so named.... 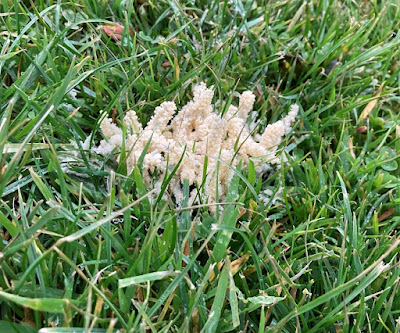 Looking across to Stromness

An another gratuitous picture of Madam Button... who has just brought a mouse in....very much alive and currently behind a cupboard in the kitchen...... bloody cat!  I'm glad you feel up to catching mice but can you NOT bring them IN THE HOUSE! 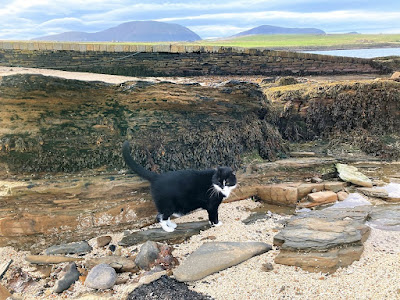 There's a lot of weather about this weekend!  One of the many gales we get at this time of the year.  Though the really bad ones are in January and February.  But last night was a bit noisy with winds in excess of 50mph with gusts much more.  The wind direction was north-westerly so it wasn't too noisy for me to get to sleep.  I leave the radio on when it's very windy which helps.

Lots of rainbows between heavy showers. I was out filling up bird feeders when I spotted the one above.

The days are getting shorter now, sunrise is 07.45 and sunset about 16.08.  But there have been some lovely late afternoon skies.... 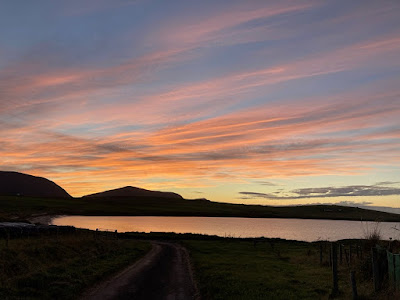 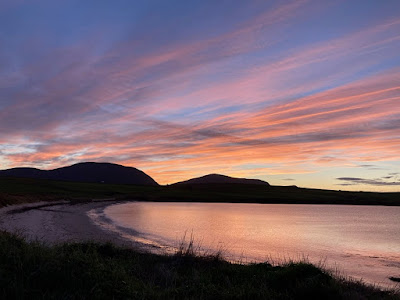 Lenticular clouds forming over Hoy High lighthouse.... I was hopeful of spaceship clouds but they didn't materialise.  Now that would have made a good picture. 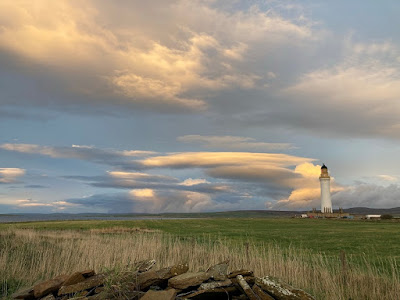 Clouds over the old croft of Windbreck 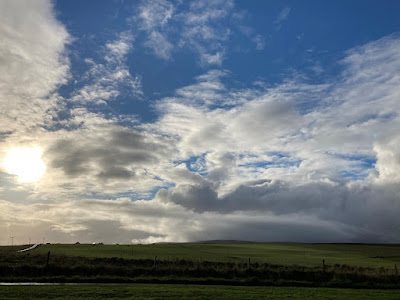 Big clouds between Graemsay and Stromness 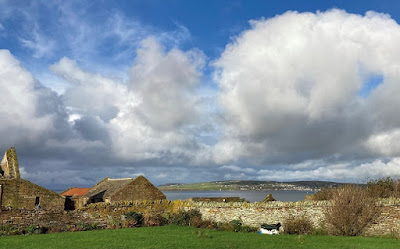 A solitary beast (can't tell whether cow or steer from here!), while sun lights the valley through to Rackwick on Hoy. 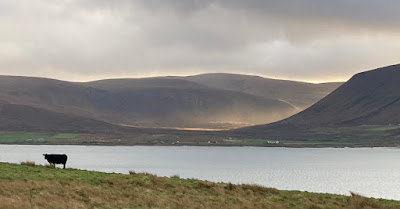 Rain showers between Graemsay and Hoy.  Scarratain, a traditional Orkney house with a turf roof on the foreground.

A choppy sea this morning when I went to check on the hens in their wee house!

And finally, Button snoozing.  She's on some medication now as I had noticed she had lost her "spring". She takes stairs slowly and one at a time. She also needs little steps to get onto the sofa and bed, where  before she was up in a single bound  But she will be 16 in January so she's still doing pretty well!  After consultation with the vet she's on anti-inflammatory meds.  Thankfully in a liquid so it gets mixed with food.  She's fine "in herself" - still vocal, still going out, eating and drinking ok.  Just more of a ground-level cat at the moment!   And I can report an improvement even after a week!  Still not springing up, but actively trotting, and even ran across the grass today.  So hopefully she at least feels a little more comfortable. 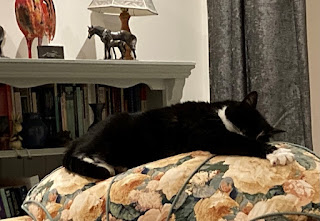 Running out of ways to say another random post.

Orkney has been in the news recently.  Firstly with a drone plane delivering parcels from Kirkwall on the Orkney Mainland to North Ronaldsay, one of the more Northerly of the Orkney islands.  You can see a YouTube video of it here.....

And then this week on ITV was a programme devoted to the testing and implementation of renewable energy in Orkney.  Sadly I expect you can't watch this outside the UK.  It's an interesting film and Orkney looks great.  However, no mention is made that Orkney has one of the highest levels of fuel poverty and no we don't benefit with cheaper electricity despite all the energy produced locally and fed into the grid.  It's a very sore point with locals.....  Click on the link below to view the programme  (30 mins)
Orkney: Britain's Green Islands

Another photo of Hoy High lighthouse and Sandside, taken from Stromness by Charlie Groundwater, who is out and about on his daily morning walk

And finally, one of my long time blogger friends writes some beautiful poetry and I always like to share it here.  This time is pretty special as there is one written about Graemsay (and Button gets a mention.  Bless her she's thrilled, well she will be when she wakes up and I tell her!)

So do take a look here :  Poems along the scenic route