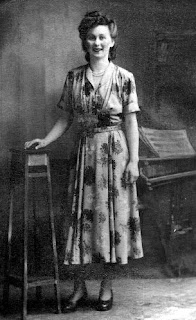 
Yesterday we said goodbye to Graemsay's oldest resident, Ethel.  She died peacefully at home last Sunday morning. She was 86 and only a couple of days before her passing had walked down to the pier as usual. A very independent lady and able to live alone in her wee house to the very end.  Her son, N, and family had lived on the next farm and she's had the joy of seeing grand-children grow up around her.

Ethel was born on Graemsay, over on the croft of Gorn, when she married Ronnie she lived at Ramray, and in her later years moved to Western Horn.  The stories about Ethel are legend and will be retold many times I'm sure.

Some of the stories were told at her funeral yesterday.  There was the one about a trip to Hoy dances in her younger years.  With her parents asleep she and her sisters Ruby and Nettie would slip out of the house, down to the boat noust and Ethel would row them across to the dance, and then back again!

She loved cats.... at one time she had about 27, but when she died this had been reduced to a mere 18....  She had names for them all, though they lived in the barn once she'd had her house done up. But in Winter she would put hot water bottles in boxes to keep them warm in the shed, and they slept there by the boiler or in the byres among the hay.

She was famous for her remedies.  Always the same one whether it was for man or beast - containing copious quantities of whisky, molasses and probably turpentine!

She was also a very kind person, quietly doing good deeds, and giving comfort to folk.  Whenever I went to visit I would take her some flowers from the garden or some home bakes. I would come home laden with chocolate, or dried fruit for more baking.

One of my first memories of Ethel was when I lived in the caravan in the garden when my house was being renovated.  She was at the post office next door which was also a shop at the time. She'd been buying cases of cat food - of course! She spent more on cat food than on her own food!  Anyway she'd walked down to buy it and Jimmy Manson (brother-in-law and neighbour) offered her a lift home on his tractor.  So she loaded the cat food in the box at the back of the tractor and then climbed in herself - standing up and holding onto the back of the tractor cab.  Off Jimmy set with her.  I couldn't bear to watch as he trundled the tractor up the steep incline to Ethel's door but it would seem she got there unharmed!

So yesterday we all came together with her family and friends to bid her goodbye.  She came back to Graemsay on the 12 noon sailing, which seemed appropriate to me as that was always the one she would come back from Stromness on. I shall miss our blethers (chats) on the boat home.

The service was held in the Graemsay hall.  Very sad for the island folk as just last Saturday night we'd had one of the best parties the island has had in a long while and the next day we had lost Ethel. The service was lovely, with a poem and eulogy from those that knew Ethel well.  I have no "faith" or "religion" so tend not to sing along to hymns. Instead I gazed out the window at the fields that Ethel knew so well.  In my head I could hear her laughing as she ran among the long grass and wild flowers with her sisters, Nettie and Ruby.

After the service folk made their way down to the kirkyard. Ethel was taken past her home and Ramray one last time.

I stayed in the hall with a few others to clear away the chairs and set up the buffet, get the whisky, and wine into glasses, all in readiness for the return of the mourners.  The family had prepared a magnificent spread of food with a few of the "ladies" lending a hand in the morning to prepare sandwiches etc.

Once back folk swapped memories of Ethel, her stories, her family. There were tears but much laughter too. The rain of the morning had given way to a lovely sunny day with just enough breeze to keep the midges at bay. 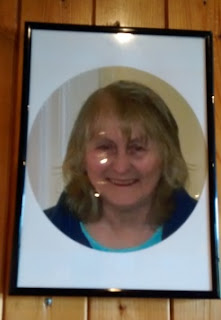 Ethel was laid to rest in the kirkyard which overlooks Burra Sound and the Hoy Hills and is just a short walk from the farm where she was born.


So goodbye Ethel.  You will be greatly missed by all of us on Graemsay.