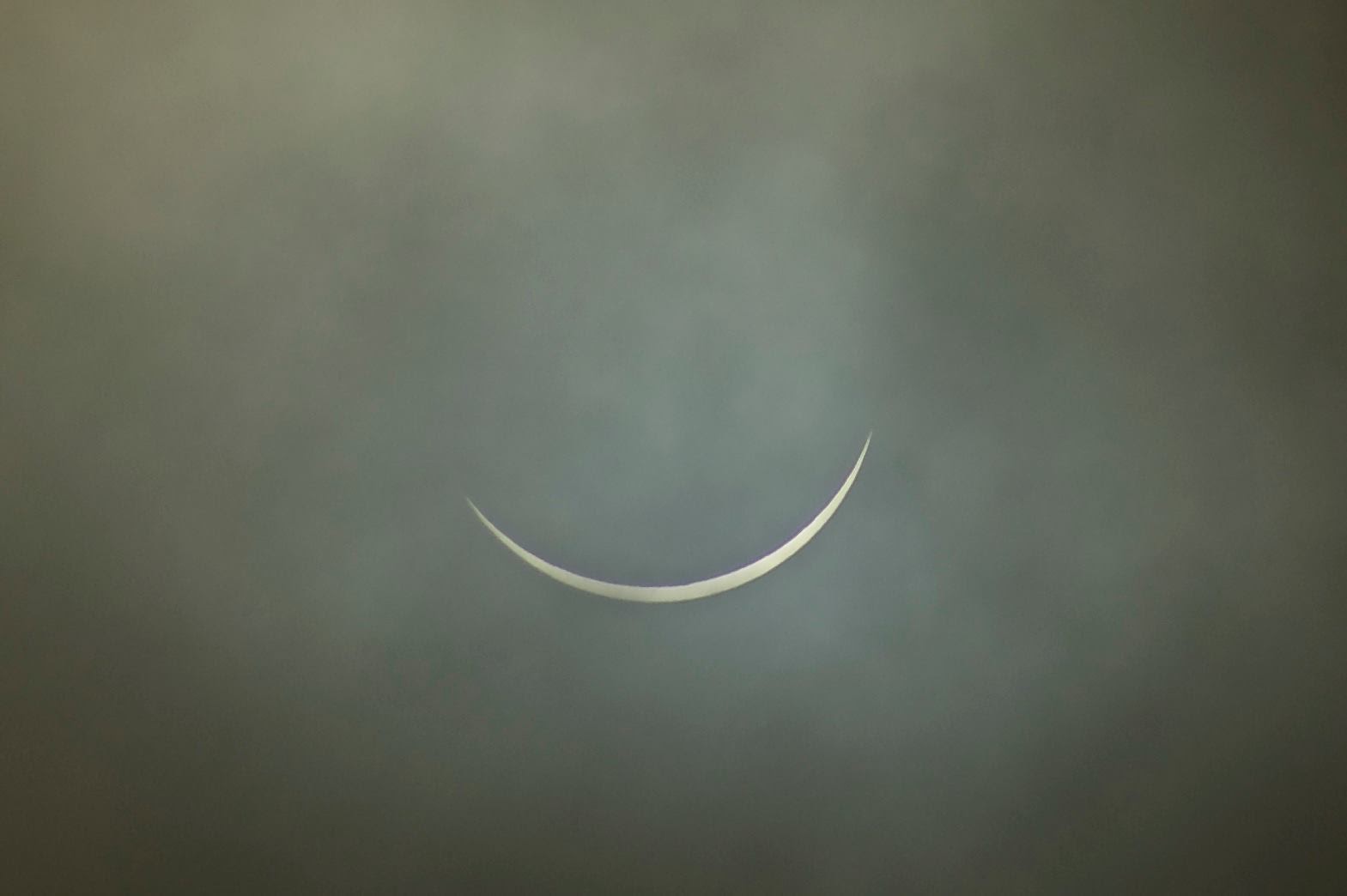 
.....and it's International Day of Happiness! What's not to like about today!

I really wasn't expecting to see much of the eclipse as the forecast was for cloud and when I woke up it didn't look promising.  But then the clouds thinned and blue sky appeared in between and I was able to see most of it.  Whooo hooo!  To say it was great doesn't quite sum up the "cosmic experience"!

Some folk were heading to the standing stones at Brodgar and Stenness, but I decided to stay on Graemsay which is *my* special place.  So I put on several layers of clothes, hat, gloves, grabbed a small flask of tea and went and sat in the doorway of the shed to watch this magical event unfold.

I could have stayed in the warm and watched it through the window, but I was curious to actually "feel" the eclipse.  So I stood outside with a perplexed Button who doesn't do "static".  She rummaged in the shed for a while, then wandered about outside and then wandered back into the shed. Meowing complainingly all the time.

I didn't try and take any photos as I have no special equipment to do so, and knew there would be plenty of pictures online. So I could just enjoy the experience. But friends who did said I could share theirs. So here is a photo cunningly taken by G. at "Imperfect and Tense" who took this over in Holm, on the Orkney Mainland. He has some other great photos on his blog so go and take a look. 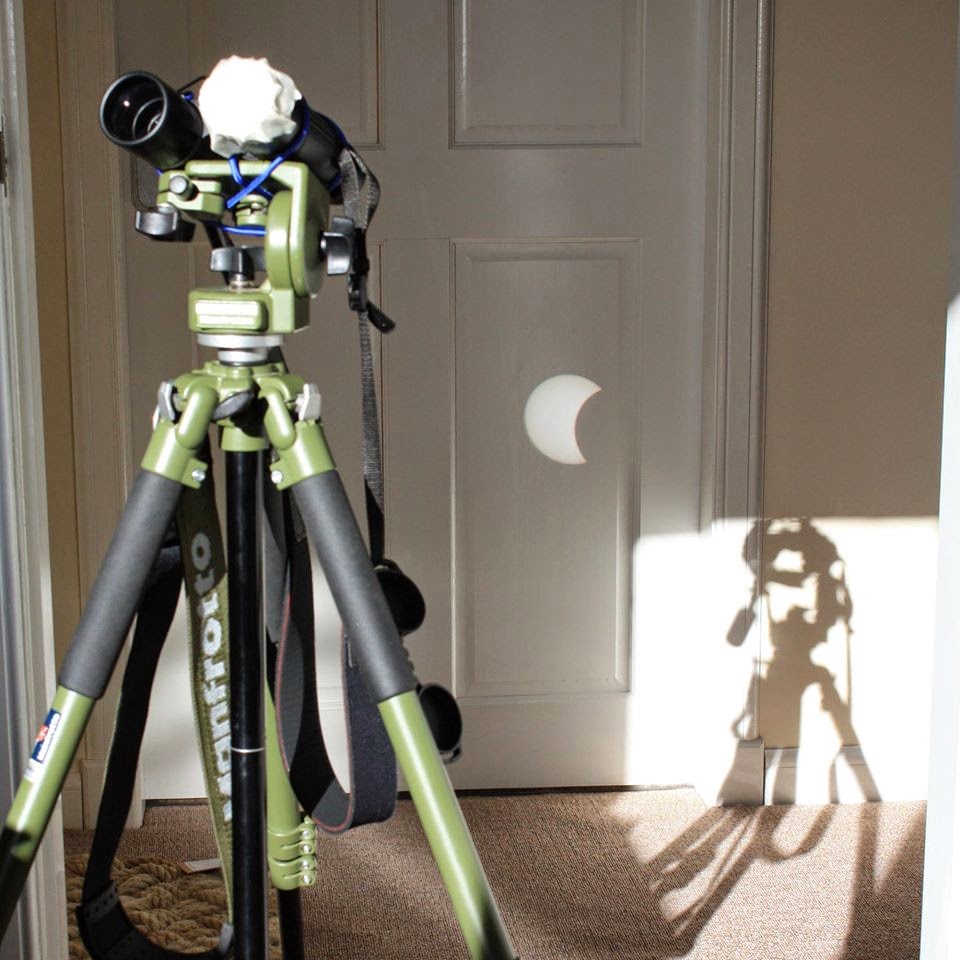 A friend had brought me a pair of the "special glasses" so I was able to watch the eclipse from the very beginning.  Slowly the sun started to disappear.  Just around the height of the eclipse it got a little cloudy but not enough to really obscure what was happening. (Note no the reflection isn't of a melting Button, just a trick of the light!).

I didn't notice much difference among the animals around me - the sheep carried on grazing or eating the silage, the lambs carried on as usual and showed no signs of distress in the gathering gloom.  The starlings did fly out of the field onto the roof of the barn, and were maybe a bit quieter, but they do that when a tractor rolls past, so not sure it was the effect of the disappearing sun!  The seabirds certainly carried on shrieking.  And Button carried on complaining.  I wondered if my hens would decide to go back into the henny house.  But nope, they sat resolutely on the back door step waiting for breakfast.  Nobody fools a chicken out of breakfast!

It DID get a lot colder, and it got to almost a twilight. Not quite but an odd light.  But to be honest it was no different than a dreich day in Winter!  So that's probably why the animals didn't bother too much and it didn't last for long (four minutes).  Maybe if it had been the summer and clearer skies it might have been more dramatic and had an effect. Friends in Stromness said the skylarks and lapwings stopped calling for a while.

It was great to feel that I was watching along with millions of others. And it was fun looking at all the pictures on the various Facebook groups.  Most people in Orkney got to see a good bit of it which was great given the cloud cover.  And later the mist rolled in too.

I found it awesome to watch and that was even knowing all the science.  Imagine how those folk hundreds, thousands, of years ago would have viewed it with trepidation.  Legends of dragons eating the sun.  Superstitions and fear around the event.  Now I can view it with pleasure and wonder at the magic of the natural forces.

And of course we mustn't forget the tides!  Particularly low tides today and tomorrow. Indeed I'm in town tomorrow and the boat home has been delayed in the afternoon by two hours because such a low tide is expected!

Again a couple of photos by kind permission of Sean Lewis 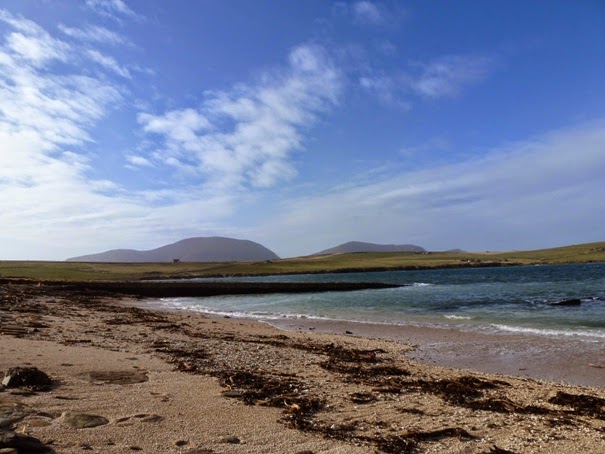 There have been some wild, windy days, and more rain, but these are interspersed with bright sunny days that remind me Spring is NEARLY here......

A walk along the shore on the coral beach bring joy anytime, but especially in the sunshine and with Button! 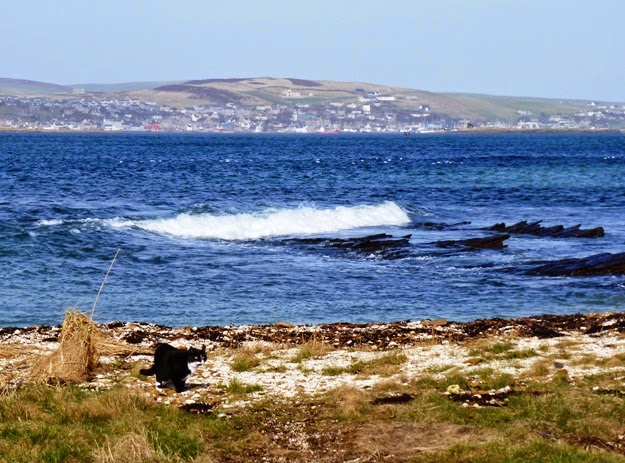 And the air is beginning to be filled with the sound of the sea birds returning, lots more oystercatchers ( who don't catch oysters!) with their bright eyes and orange bills, plus a wee Sanderling hanging out with his/her bigger pals. 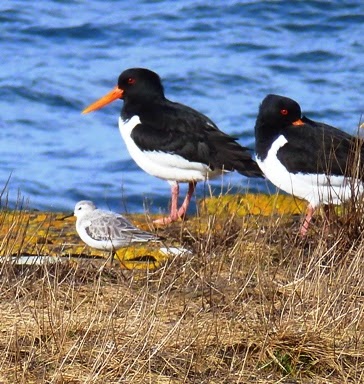 And some ringed plovers plus another Sanderling

They were all sitting on the old Sandside pier 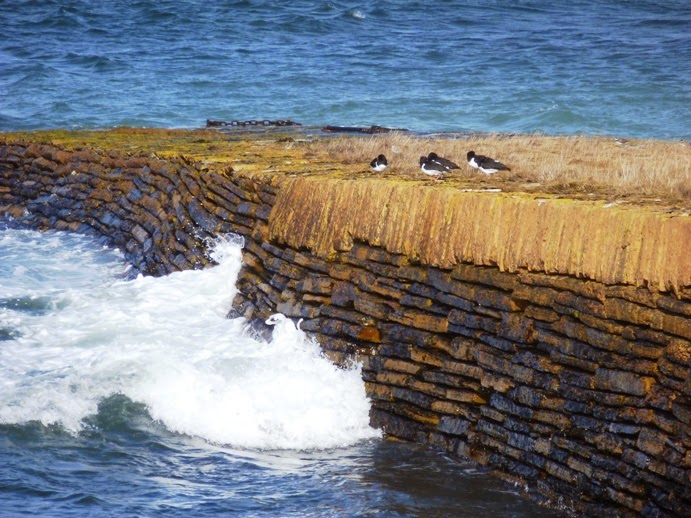 Button waits patiently while I take photos.... this old building is perilously near the edge, one Winter storm will no doubt pull it onto the shore in years to come.

Over  by the Manse the ewes are being fed.... 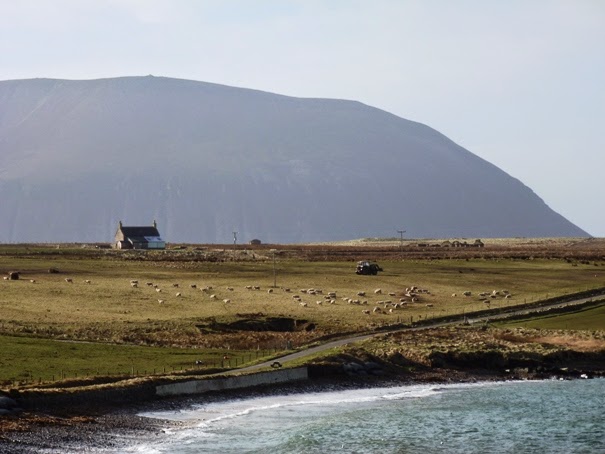 Meanwhile the tide is coming in.... Lots of seaweed washed up through recent storms.  Stromness in the distance looks like a tropical island! In fact it's the Orkney Mainland - the largest island in Orkney [yes I know we call it Mainland, to those of us in Orkney it IS!]. 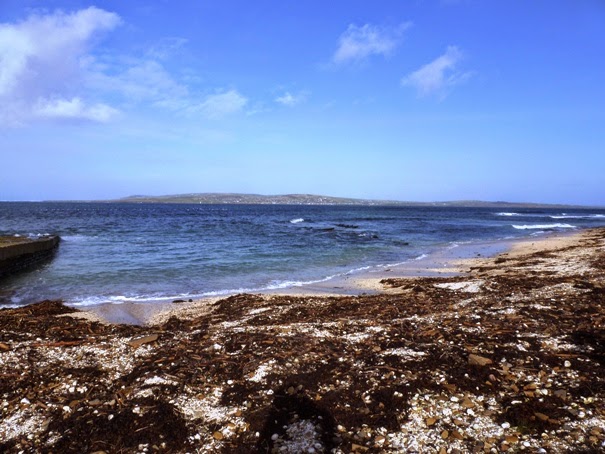 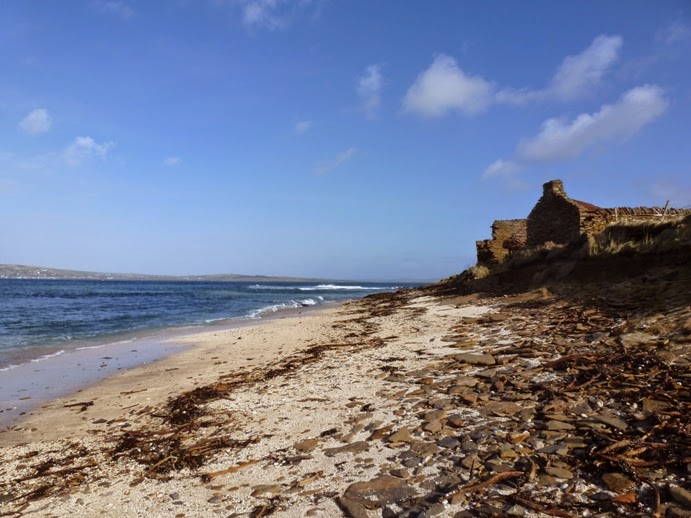 And back at the house and garden, things are growing again!  Willow buds coming on... 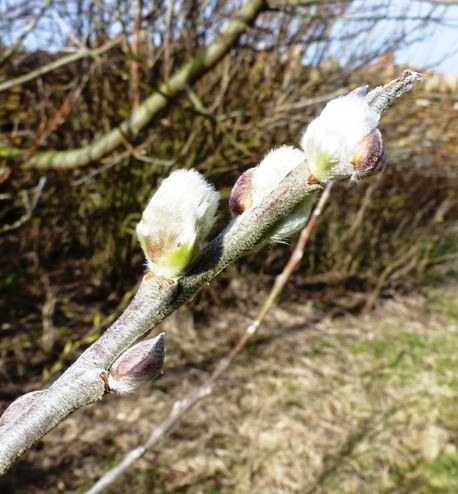 Crocus blooming among the daffodils (yet to bloom) 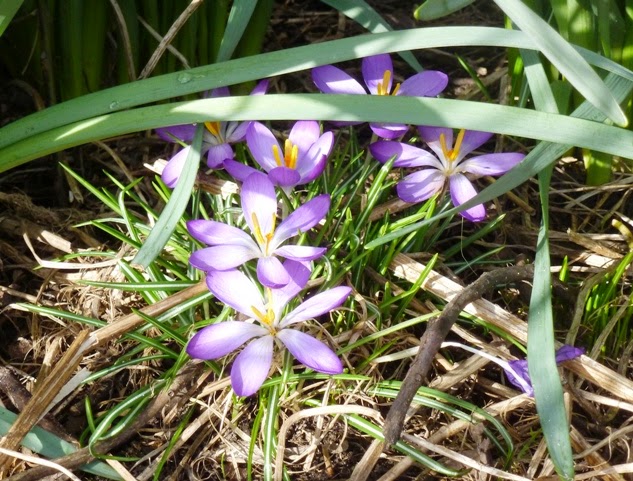 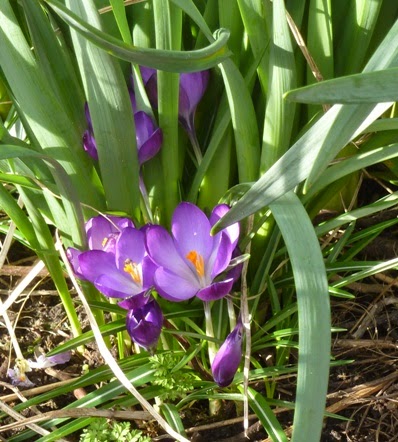 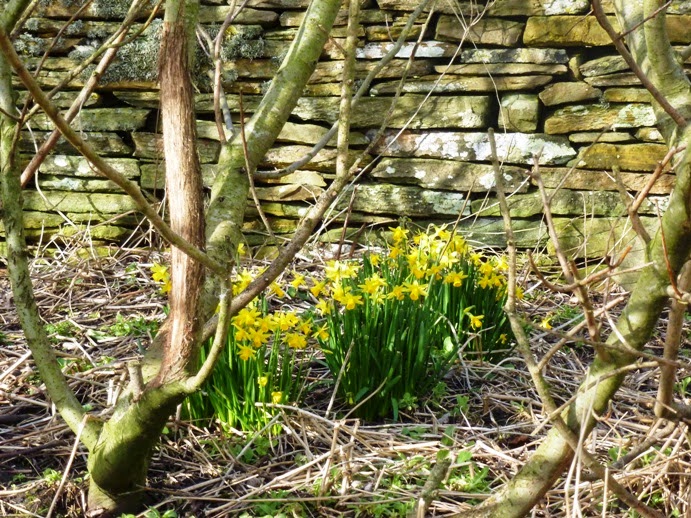 And "home" looking good in the sun, with Ginger, the cockerel enjoying the rays, and the willows coming into bud. 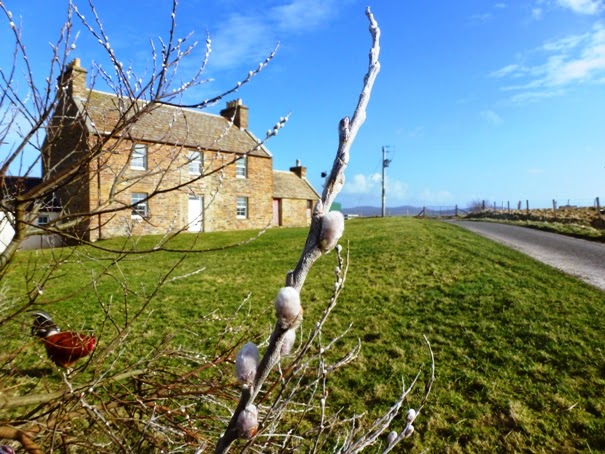 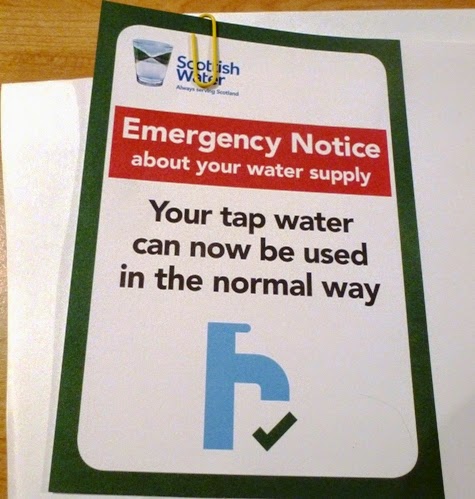 Er - actually we've had drinkable water out of our taps for well over a week now, but I've been unwell and still trying to keep up with work, so not been here to tell you about it!

But the pipe between Hoy and Graemsay was fixed, tested and once the water quality was deemed acceptable for drinking, the "boil" notice was lifted.  So all is back to "normal" on Graemsay.   Though we still have plenty of bottled water around. 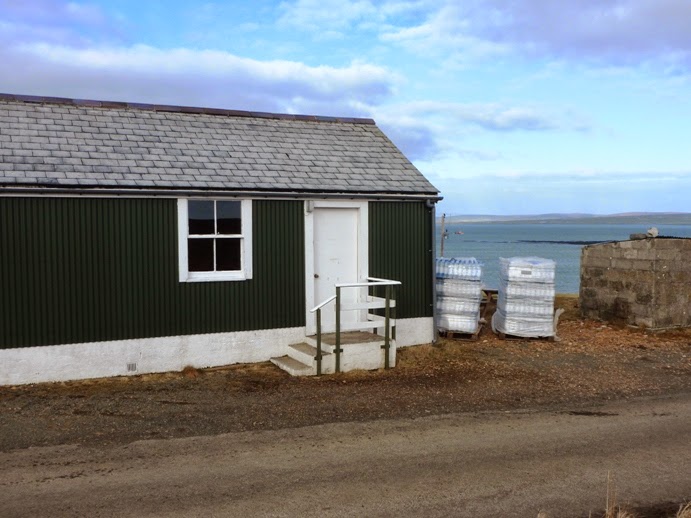 I've been using the bottled water for drinking as there is a lot of air in the water out the tap. I'm sure it's perfectly fine, just doesn't look very nice to drink!

It is officially Spring! 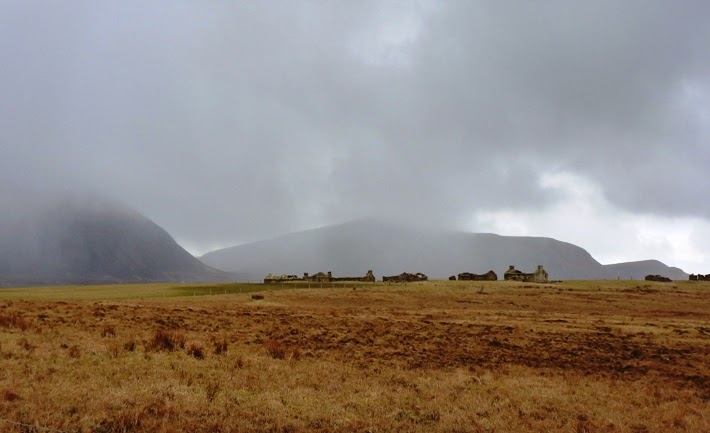 Yesterday (1st March) was the first day of Spring...whooo hoo! [see note at end]  Er yes - that'll be hail showers then. It was also Dewi Sant (St David's Day) - he is the patron saint of Wales.  I always celebrate as my father was from the Welsh valleys. So a nice mug of tea and some Welsh cakes were in order.... 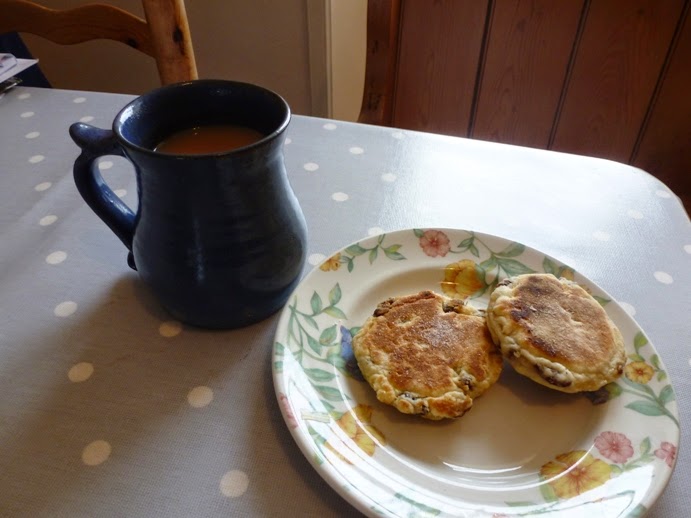 A few daffodils are out in the garden but I didn't have time to photograph those.... and there are new lambs in the field - but they were hiding among the silage bales for shelter so I didn't get a photo of them.  You will have to use your imagination for both! The rest of the "maternity unit" of pregnant ewes are happily tucking into silage. Yes - dark clouds full of hail hovering. Poor sheep and wee lambs! We still have water coming out of our taps, which is a huge relief.  Work is ongoing to resolve the problem. Scottish Water have been looking at various options and we await their decision. For most of us as long as we continue to have water out of our taps we can be patient.  Bottled water for drinking of course, but that is no hardship compared with last week!

I went for a wander across the other side of the island to see the boat that seems to be permanently over the bit of sub sea pipe that sprang a leak. 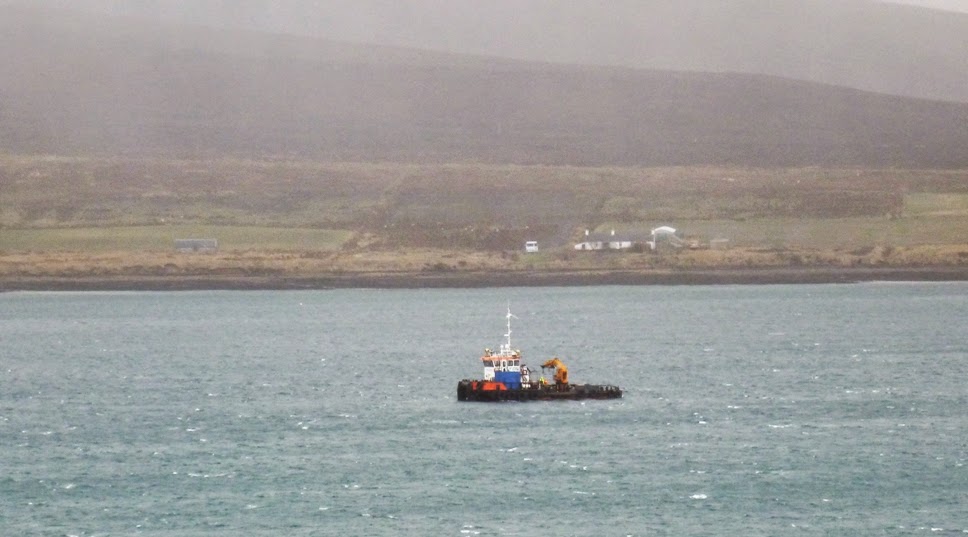 There's a mini-digger at the shore too. Though that's not been in use since they discovered the problem was under the sea. 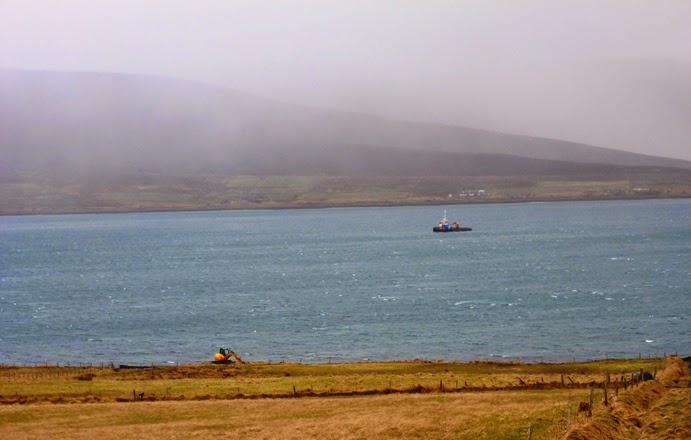 As you can see - quite a stretch between the islands. The sea looks benign today but it can be a treacherous piece of water with strong tides and currents.  Should be interesting if they decide to lay a new pipe! 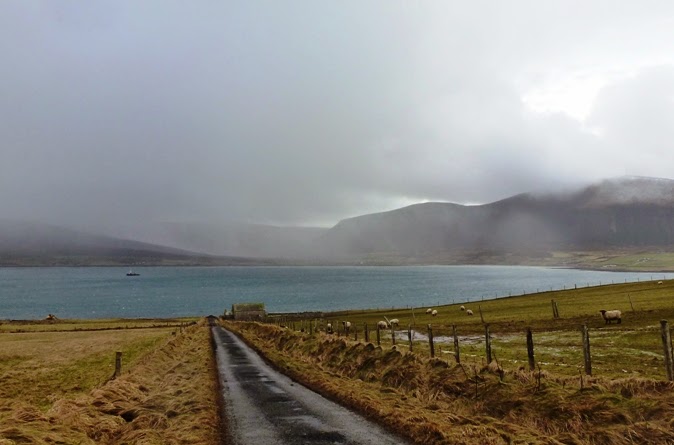 On my way back home I stopped to take a photo of this ruined croft looking towards Stromness. What a wonderful home that must have been. What a view!! 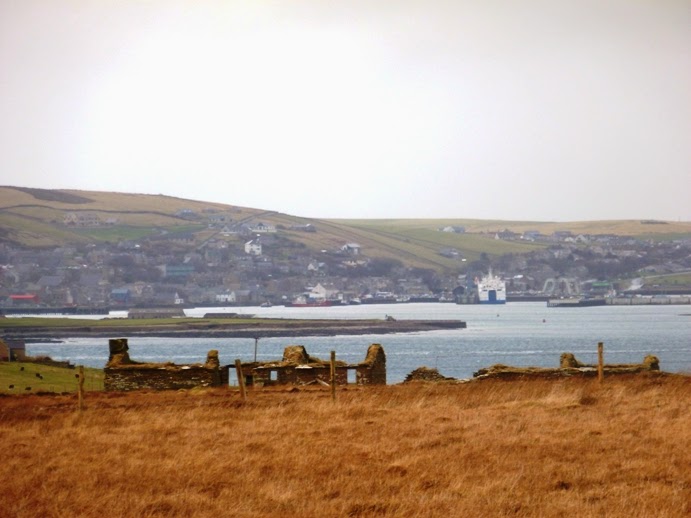 And back at home, there's a lot of water in the field, the result of a very wet spell of weather! 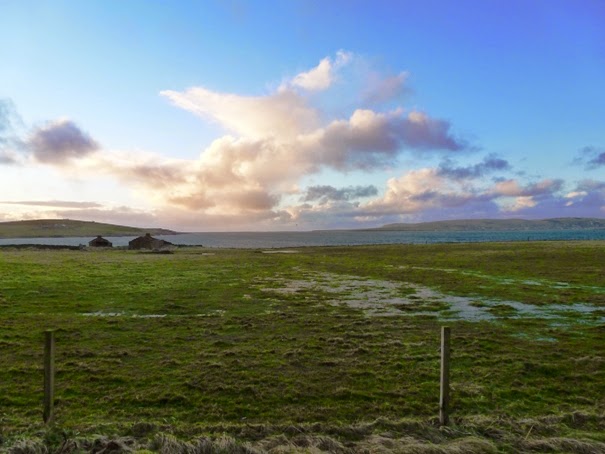 Note - Actually the OFFICIAL first day of Spring is 21st March.  But in my house it's 1st March, Dewi Sant, because that's how my mum and dad treated it.  The first daffodils would be out in the garden and it always FELT like Spring. And I am always so desperate for it to be Spring (even when I lived South), that I take any indications I can!  But really Spring doesn't start till the Equinox.
Posted by Sian at 21:23 6 comments: