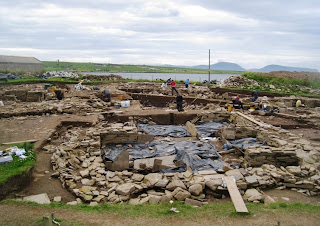 Today I finally went along to see what has been happening this year at the Ness of Brodgar dig. If you are in the UK or Australia you may have seen the programme at New Year or recently on the site. It is amazing. A huge site which is thought to cover 3 football pitches, though only part of the site is being excavated at the moment.

This site is between the Ring of Brodgar and the Standing Stones of Stenness. It's also between two lochs. Barnhouse, a Neolithic settlement, is nearby, as is Maes Howe.  The Ness of Brodgar site dates from the Neolithic period but the purpose of each building is still unknown. It's not thought they are domestic spaces like Skara Brae. These are much larger and are defined in different ways. The whole site is surrounded by a huge wall too.  The largest building has been dubbed "the Cathedral" - though as this pre-dates Christianity it has nothing to do with specific religiosity but more because it is a cross-shaped room.  But it is thought the building was used for ceremony or ritual and it has walls 5 metres thick! It is aligned with the Maes Howe passage grave, and in line with the rising sun on Spring and Autumn Equinoxes  Several hundred cattle heads and shin bones have been found in one part of the building. So some feasting took place on the site too. (Or it was the first Orkney Abattoir!!)

Stones have been found with incised patterns on them and pigments of autumnal shades have been found on some of the stones too.  Lots of pottery fragments have been found and various stone tools. Some of the tools are made out of flint, which isn't found in Orkney but given the position of the islands, trading was very common and this could have been "imported".

The dig is closing up for the season and the site will be covered over till next July.  If you want to know more about what has been going on this year there is a diary available here.

Meanwhile, here are some pictures giving a "snapshot" of the site (if you click on one you can see them larger and in a "slide show" format). No "digging" was going on as such today. Now is the time to record everything before the site closes, so there were various archaeologists, measuring, drawing, recording. 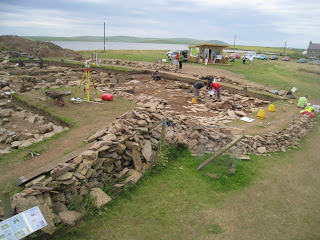 The site probably extends under the house to the top right but no one knows for sure. 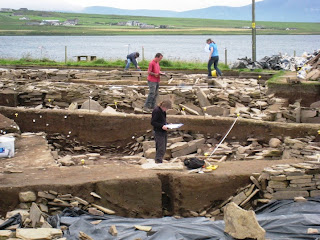 The chap in the middle seems to be standing on plain earth - but it is actually "midden" - that is rubbish, and was often used to fill in houses or sites after they become disused. The midden is always a valuable resource for archaeologists, giving clues to what was eaten, used and discarded. 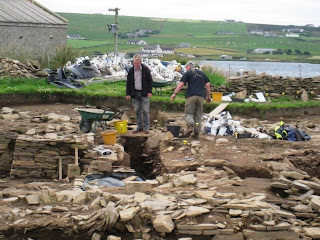 Nick Card, on the left, is the site Director (and Senior Project Manager at ORCA), seen here staring into a big hole... archaeologists seem to do a lot of that ;-) 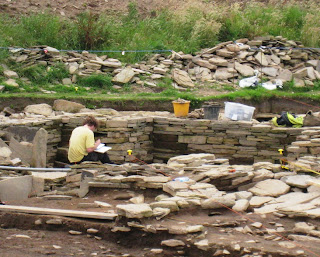 As you can see the walls are really well defined and well built.  One of the archaeologists is recording data in this corner.

This building is sitting on part of the site. But within the archaeological site have been found stones which give rise to the opinion they were used for roofing, much in the way these larger stones are used on this very traditional Orkney stone slate roof. 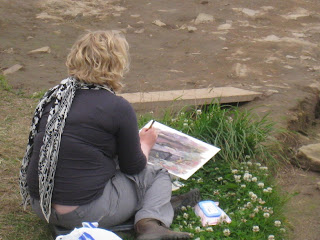 Recording the site takes many forms, some high tech, some very traditional! 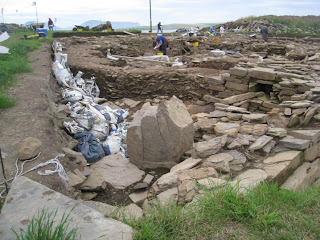 This is part of one of the two standing stones found as part of this site. 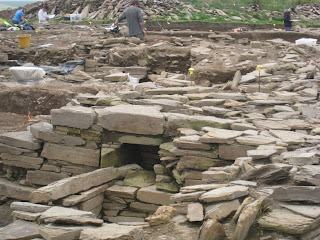 That's an awful lot of stone! 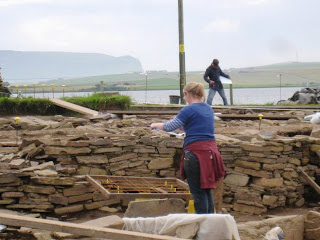 More careful recording going on. Look at those stone walls! 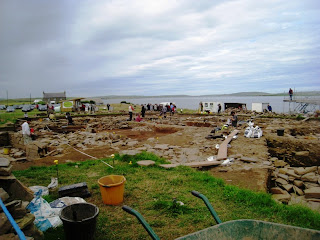 As you can see - the site is huge! 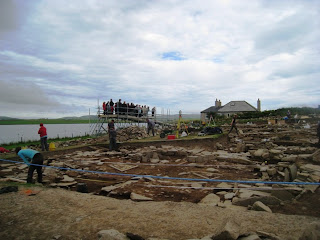 There's a viewing platform which is essential for non-archaeologists to make sense of the place!  Tours were held several times a day, with a large part of the tour conducted up here on the platform. Great view! 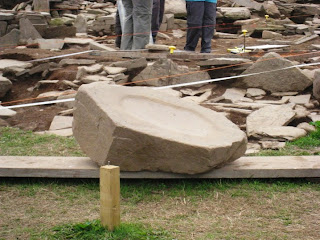 This stone was dug up recently. It's a bit like a quernstone - used for grinding up grain to make flour etc. It's unclear what it's purpose was on the site - it may have been as a quernstone - or not - the jury is still out apparently. But... I got to touch it! Amazing!! To think someone thousands of years ago made this and it's lain underground for so long....and I got to touch it! 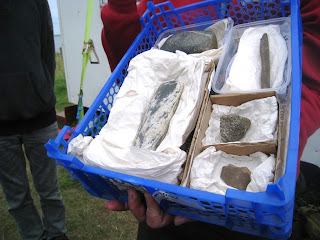 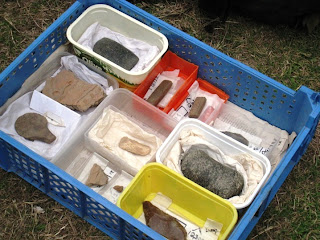 More of this year's finds. Including some pottery fragments 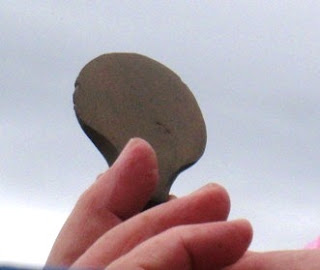 Who knows what this was used for. One thought is it was used to make or mark pottery.


So that's it for another year at the Ness of Brodgar.  Can't wait to see what they find next year!!
Posted by Sian at 21:51