Here's the third episode from Derek Mayes about the annual peat cut. Do take a look at Episodes 1 and 2 if you haven't already. So over to Derek...


It has been hit and miss with the weather – mostly miss then, not so now, in early June.  I have done about 13 hours-worth of cutting and Dot has been out a few times to turn and stack; winds have blown some too-tall piles over. But is hasn't rained much in the last two weeks and some is now dry enough to bring home. 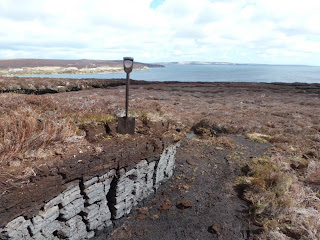 I explained how I had to remove the top blanket of heathery turf and place those bits on the exposed ground near the beds. This stripping along the top of the beds, is much the hardest part. 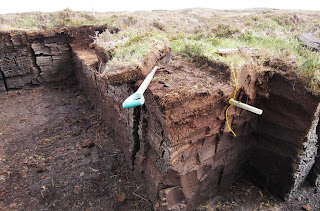 But I have skimmed the heathery and sometimes grassy turf off and placed those ‘mats’ on worn and bare ground, left by previous and careless peat-men. 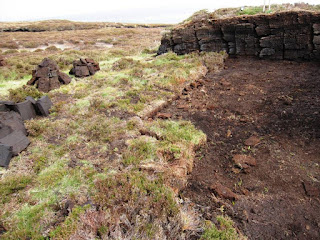 Underneath the heather – one must take most of the roots of course – is a less fibrous band of lightweight peat. Also hard to cut into, because of all the strands of yesteryear’s heather. 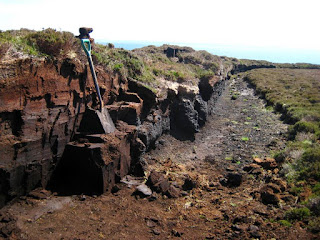 I can cut them into fairly thick blocks – bricks really,  as the wind and sun will dry them very quickly, in less than four weeks. These lightweight, fibrous blocks make good firelighters and my farmer-neighbours used to sprinkle paraffin on them to actually start the fire – with a scary whoosh I suspect! 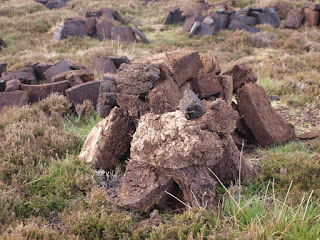 The next layer down, another spade depth, the peat is far more consolidated. It cuts easily (but the spade has to be sharp) and will dry fairly quickly but I cut it smaller to make certain. 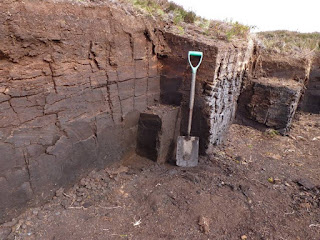 Because these first two layers are already quite dry, the shrinkage is about one third.  Obviously I have to consider the size to get through the door of the stove.
The very bottom peat, dark, chocolaty, heavy and wet, loses at least half of its bulk to the drying process. It is an art, and requires experience, to get the thickness right when cutting. Too thick and it will not dry, too thin and it will shrink and break when handled. 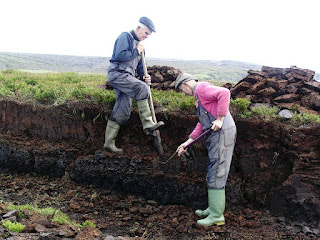 The picture shows my farmer friends, Melvin and Neil, cutting peat in 2005 – their last ever cut I think. Melvin uses the Tusker, a strange bladed tool which is used from the top of the platform and pushed down, with assistance from the foot. Neil then forks the slices onto the top of the bed. Traditionally, in Orkney, peat was cut in pairs – often man and wife or father and son. The peats were laid out on the heather for 10 days or so, turned over and then two weeks later made into stooks. 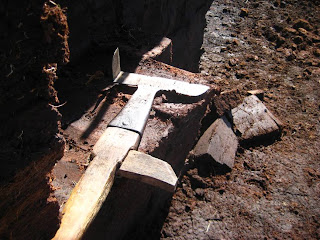 Actually this is not a Tusker but a Luggie a slightly different design and favoured by some.

Here is a Luggie and a Tusker - see the difference? 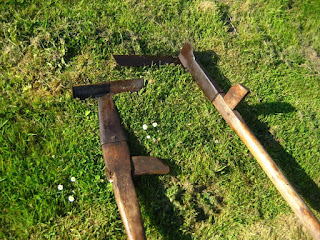 The Shetland Tusker is different again - here's one - 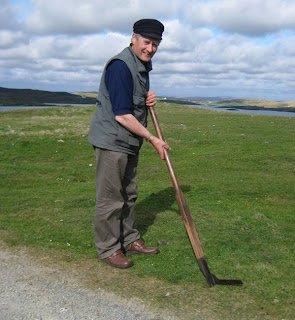 But try as I might, I cannot make the Tusker or Luggie work for me, so I have resorted to a spade which, as you see, allows me to cut quite big blocks and carry them to the drying area. I slice these blocks into about five slices and stook them in my unique way whilst still wet. 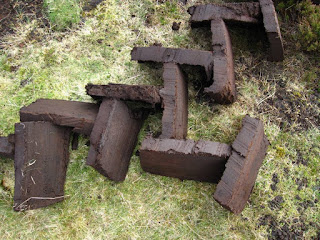 Here you can see fresh ‘Tusker’ peat, cut with a spade and my little stooks, standing to dry on edge with all faces exposed to the airs. 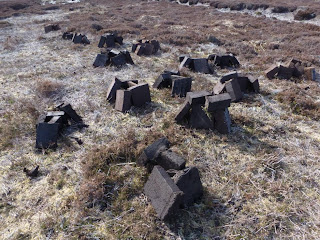 After 12 days or so, Dot and I will rearrange these piles, inverting each slab to complete the process. Later we will make new, higher, piles ready for collection, creaming off the top pieces as they become hard and compact. 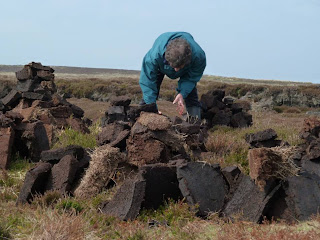 So, I have come to the end of Phase One – the April/May cut.

Normally, at this time, after the flourish of  opening up and bed preparation, when I cut for about 10 hours-worth of evenings, I give it a break until early or mid June. This is about the time normal people cut peat.

However, the earlier cut is refreshing, brings in the Spring, as I am so keen to get started and always over-eager to replace depleted stocks, that I forget that cold rains and possible frosts may take their toll on my early ones.

Last year I started too early and frost made its presence felt. Damp and fresh cut peat does very badly in frost as the dampness expends into ice and breaks down the consolidated structure into crumbles and flakes – useless for collecting and stacking of course. We put these these bits and dust into paper bags for the fire - not many people do that.

So now I am resting a little, planting trees actually. But in two weeks' time I'll do a final 4 hour cut and stack.

Today (June 9), the headland is quiet – no-one else goes there, just Dot and I most days. Not for peat specially but because its quiet, airy and, well, delightful. The heather and crowberry are greening up, beetles have begun to hunt, sedges are waving their heads, bonxies, tern and snipe have arrived and so have the drying night-breezes. My little stooked slabs are already stiff and need turning upside-down and inside-out to complete the process.  It does not take long to move along the lines and rearrange the little structures. I leave the bigger piles of  fibrous peats as the breezes alone will do a good job. 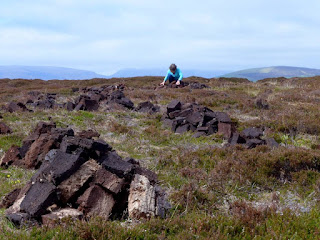 One more short final episode to come, in September.  Who knows, we may be burning it then! 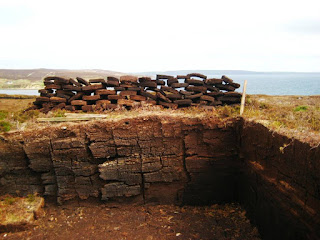