A ride round Graemsay (3) 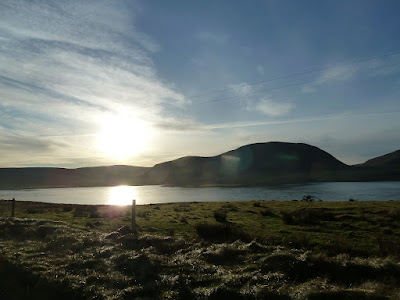 A few more photos from e-trike rides around Graemsay.  Meanwhile I haven't been out of the house for the last 3 days due to the weather (wet and windy), well except to feed the hens.  Button has been in and out for the necessary and that's about it!  Forecast is for better weather for the next two days so hopefully we can both get outdoors then.

Above are the hills of Hoy.  Below the Old School, recently sold. 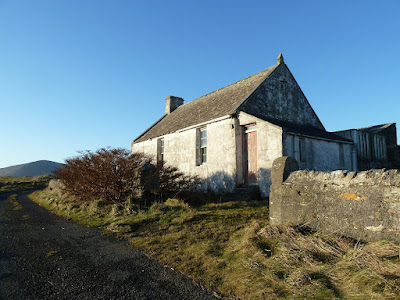 The old School and Cott of School behind. 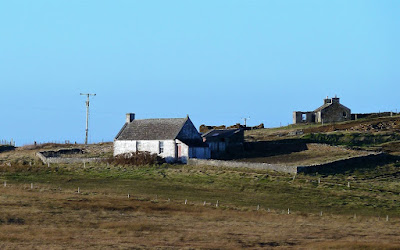 Croft of Dean, with Hoy Hills in the background. 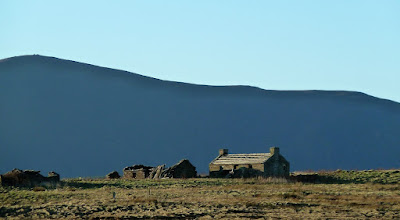 I think this ruined group of buildings is known as Flaghill 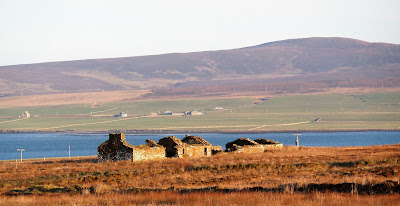 Flaghill and the Manse.  The Orphir hills in the background. 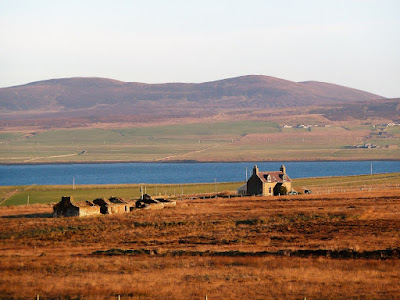 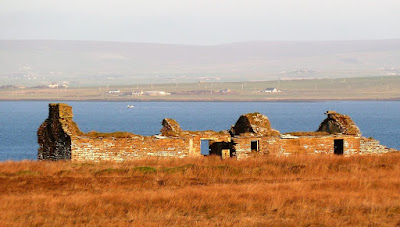 From just below the old School, looking down to Sandside and Hoy High lighthouse. 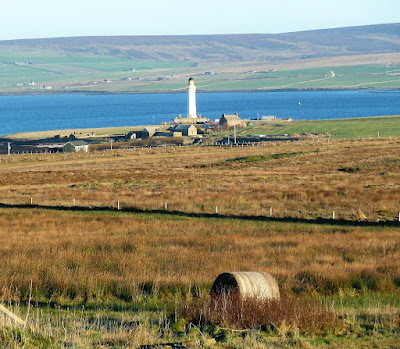 Hope these display OK - I can't seem to view on my laptop!!

A ride round Graemsay (2) 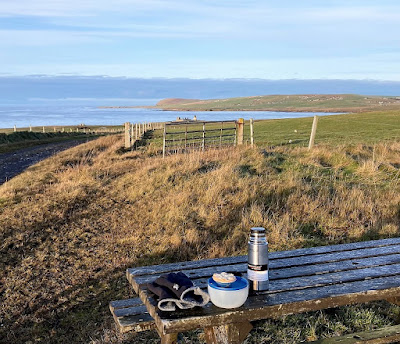 Sometimes, on a good day, a ride on the e-trike involves a bit of a picnic.  A small thermos of tea and some munchies (cake if available) to be enjoyed on one of several picnic benches around the island.  All have amazing views.  Though it has to be said, with the Winter weather, the picnic idea has only worked out twice so far....

Photo above is at the West end of the island, nothing between us and Canada!  To the right is the Orkney Mainland, and at the bottom of the hill is Hoy Low lighthouse.

I have the e-trike on loan for a bit longer.  I am definitely wanting to buy one.  Unfortunately this one is an inch too wide to go into the shed at the house so I need to find something a bit narrower.  The manufacturer's were approached (Jorvik) but sadly they don't make a smaller version nor can they suggest any modifications so I can get this in the shed.  The search continues! 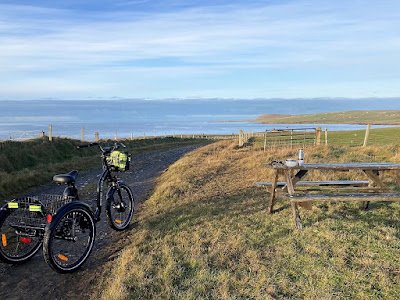 The view to the left of the picnic bench..... The Hoy hills.

Hoy Low lighthouse, and outside Stromness below...... 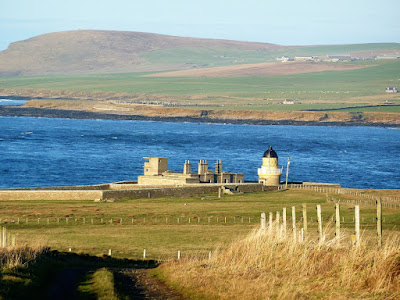 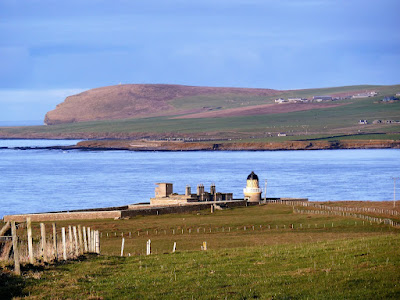 Looking over to Black Craig - the sun sets just to the right of the summit in mid-summer.  At the moment it is still setting very much behind the Hoy hills.... 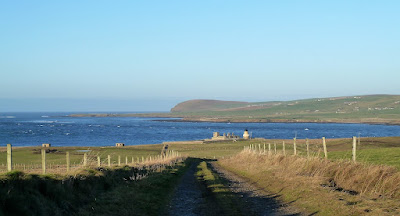 Stromness across the water, nestling into the bowl of Brinkies Brae

Sheep on the top of WindyWalls Brae..... 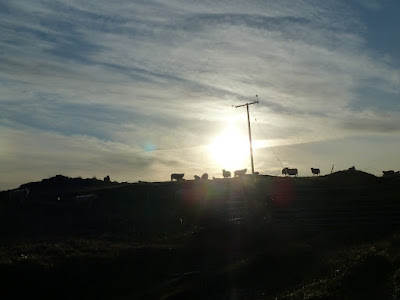 This is the South side of the island now, looking over Burra Sound towards Ward Hill on Hoy. 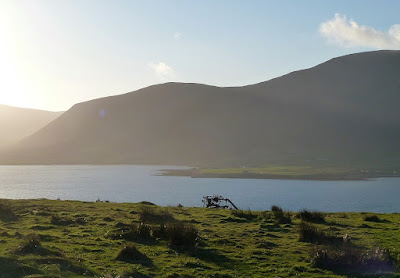 The valley between the hills on Hoy. 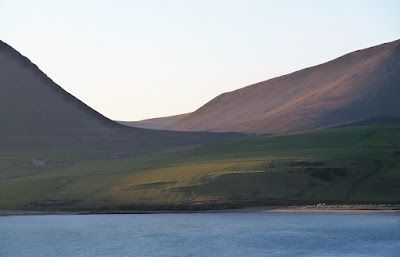 This wee house is known as the Cott of School.  It's just above the old school.  Though the actual School House, where the teacher would have lived, is across the road. 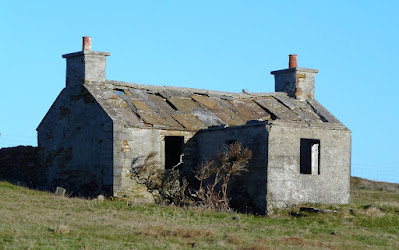 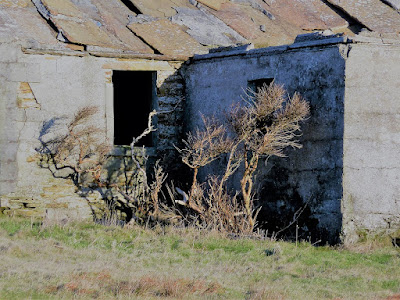 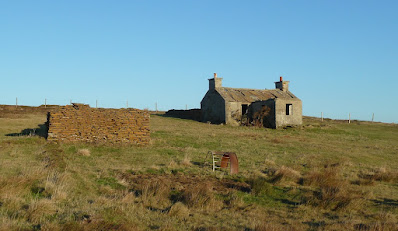 Looking across to Hoy again.... 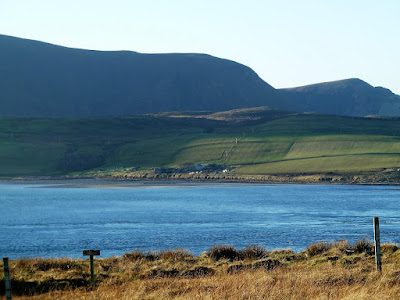 The tour of the island will continue!  The weather in these photos looks lovely - well I'm a fair-weather cyclist.  I don't mind it being cold, but it has to not be windy or wet!  And if the weather is flat grey and cold I tend to just do a couple of laps of the island and not stop off.  Today the wind is howling as it does in the Winter, and it's most definitely an indoor day.  Tomorrow looks like more of the same.  But hopefully an outing again at the end of the week.

A ride round Graemsay (1) 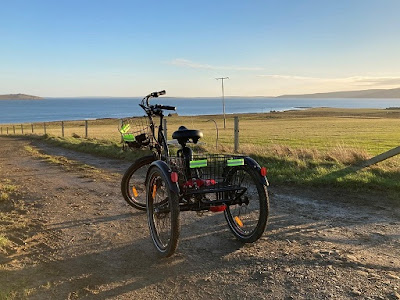 Although the weather has been changeable over the festive season I have been able to get out most days around the island on...... an e-trike! This is an electric (battery) powered tricycle that I have on loan for a few weeks. It's a real game changer for me and I'm looking into buying one for getting out and about on the island.

The Scottish Government gave some funding to the Scottish arm (or leg - ahem) of the UK Cycling group, to encourage folk to get out and exercise more.  This involves regular bikes as well as trials of e-bikes. Advice is provided as are taster sessions.  In Orkney the local person spearheading this has been encouraging folk on the smaller isles to have a go.  My neighbours tried the e-trike but decided they would prefer a two-wheeled e-bike to try instead.

I was curious to have a go on the trike - because of life-long reduced lung capacity and other health issues I have never been able to ride a bike.  I run out of puff after a few yards! But I thought if I can ever get away on holiday again, then often they are available for hire in country parks etc so I might be able to go out and about with friends instead of the habitual sitting in a cafe while they go off for a walk.  Well - it's no hardship with tea, cake and a book, but in good weather it would be fun to go with them!

But having the "e" assist on helps enourmously.  I can pedal slowly with no tension on the pedals yet could whizz along at 10 mps if I wanted to (max speed of bike is about 20 mph I think). I did get up to just over 10 mph but for me the joy is being outside, getting fresh air, watching the sea, clouds, animals as well as getting some not too strenuous exercise!  The battery assist is supposed to last for up to about 35 miles, however as I need the assist on all the time (apart from when free-wheeling down hills - wheeeeee!) it doesn't go as far.  But on Graemsay that isn't a problem.

Anyway the next few posts will be a compilation of photos taken over the last couple of weeks while out and about on my e-trike!

I popped up to the post box on the trike - we have post collections and delivery 6 days a week.  The phone box is not in use - hence the rope round it to keep the door shut.  However the community is seeking to purchase this from BT and set up as a public access defibrillator site. 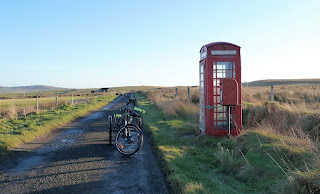 This leg of the journey is from my house, next door to the lighthouse, up the brae to the community centre, and along past the phone box. Then up an incline towards the Windywalls brae.

Sheep may safely graze.....  they have got used to me whizzing past and don't run off so much now! 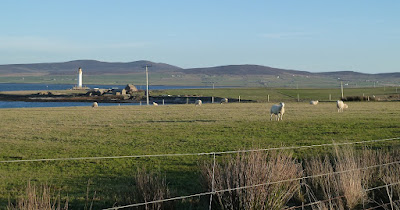 Looking back towards Sandside and the old steading.  Orphir on the Orkney Mainland in the distance. 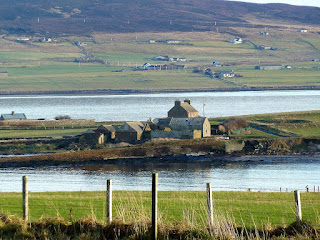 And just up the Windbreck brae is Quoynanapp, one of the many ruins of houses on the island. 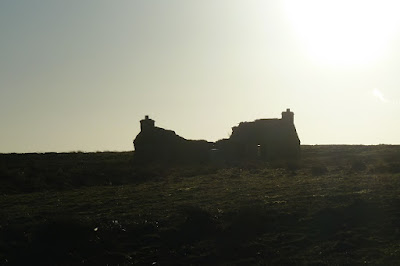 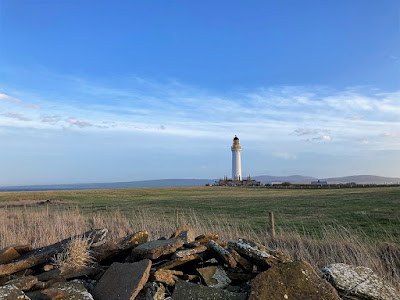 Belated New Year Greetings!  It's 2022..... hmmm I'm hoping for a better 2022 than the last two years as I'm sure are many other people.  Hey Ho.  It will be what it will be.  It was quieteon the island last night with families celebrating at home rather than mixing.  I don't do late nights so was in bed by 10.30 with Button and a book.  I was asleep before midnight so didn't hear the ships hooters this year.

Today the sun shone, and it was very mild for the time of year, however it was also quite breezy.  So just a couple of snaps from when I was down by the hen house earlier today.

Above, Hoy High and the hills of Orphir on the Orkney Mainland.

Below....... looking over to Stromness from outside the Henny house..... 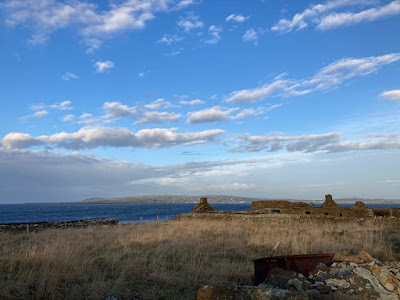 And these two chaps are grazing in my field.  On the left is Buey, a Zwarbtle-cross ram, and on the right is Yacob, a Jacob-cross ram. They are having a bit of a time away from the ladies so are spending a few weeks here.  They are very tame and enjoy a scratch on the head. 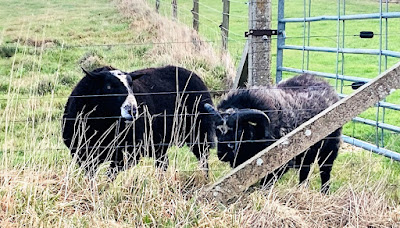 I wish everyone a safe, peaceful and healthy 2022!