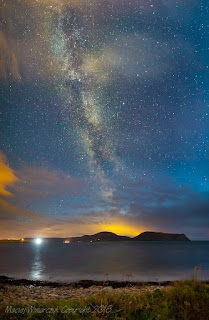 No not a giant chocolate bar!  The astronomical version.   Maciej Winiarczyk who lives in Caithness does the most fantastic photography of the Northern Lights (aurora), and night sky.  He was in Orkney recently for the Science Festival and took these photos from just outside Stromness.

The very bright light on the left of the photo might be Hoy Low lighthouse, judging by the map he provided for the direction of the shot.  The hills are on the island of Hoy. Both photos were taken on long exposure within a few minutes of each other. 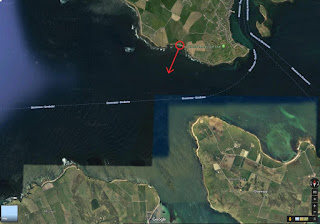 The yellow glow is the remains of the sunset.  I love watching the night sky, often sitting on a bench in the garden.  Though the many lights in Stromness now dull much of the Northern lights from Sandside :-( 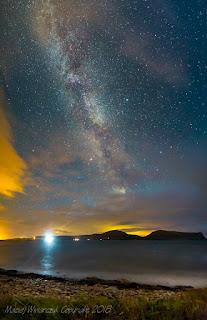 Yay!  I'm home after being away on holiday in Dorset, then after returning for 4 days off to Edinburgh for a work conference and then down to York for work.  Nice as all that was, it's good to be home!

I hope to catch up with some posts shortly.  Meantime the photo above was taken by artist, Sheena Graham-George, on a walk along the top of the Orphir hills.  You can see the wee island of Graemsay  with a tiny white Hoy High lighthouse, as well as the Hoy hills in the background.  Shared with her permission, of course!