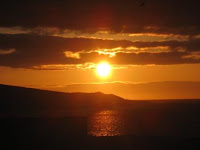 There was a beautiful sunset on Sunday, unfortunately at the moment our weather is characterised by mild weather, half a day of sun followed by 2 days of mist..... this is NOT what is supposed to happen... we are meant to get TWO days of sun then the mist......sigh...... We've also been short on rain, although the grass seems to be growing OK and plants in the garden are moving on apace. Though the ground has yet to warm up before I can plant my tatties. Meantime - I just enjoy the sun when I can! 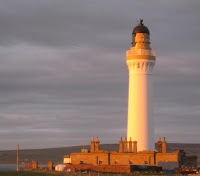 Email ThisBlogThis!Share to TwitterShare to FacebookShare to Pinterest
Labels: sunsets

Today has been a gloriously sunny and "almost warm" day - a strong breeze has just taken the edge off the sun.  But it's a change from yesterday when we had rain and gales!  Which was rather unfortunate as we had a "photography course" on the island, another course arranged by the Scapa Flow Landscape Partnership. This time Jamie McVie from the Orkney Camera Club came out to give us some tips on taking good photos.  Um... I'm not sure any of today's photos reflect the lessons learned!  And no I have none from yesterday - mostly just practising.  My camera is just a simple "point and shoot" digital camera so I am limited in settings so may not be able to do much "fancy stuff", but did learn some things in the way of composition. I yearn for one of those flashy SLR digital cameras, but I doubt I would use it much - I love my compact camera as it slips into my pocket and I take it wherever I go.......

Anyway back to today, oooh the weather.... SPRING!   Oh yes I'm a happy bunny as, at last, I can begin "spring cleaning" the garden!  I have seed tatties to plant (a Pentland variety as well as Desiree) so wanted to turn the soil over and get things ready for them.  The mulch matting (silage plastic) proved very successful in keeping the weeds at bay since autumn and survived the gales. 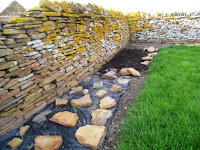 The hens (and cockerel) were delighted that once again I was gardening and providing them with the opportunity for light snacks of juicy worms.

I'm not quite sure WHAT this hen is saying to the cockerel - maybe "Hallo Gorgeous"?! 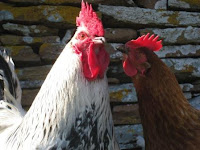 Camouflage cat in her usual position under the wheelbarrow! 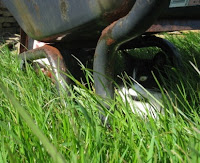 Yesterday, despite the mist, Dan Lee (project officer for ORCA), his partner Antonia Thomas, also an archaeologist and a few hardy folk from the Orkney Mainland visited Graemsay for a day looking at some archaeology on the island. The event had been organised by the Scapa Flow Landscape Partnership to give the Graemsay folk an opportunity to explore some of the heritage on the island. OK we don't have a Skara Brae, or any other major discoveries - but we have lots of "grassy mounds" and some wartime relics (the concrete variety, not human - just to be quite clear!).

We started off at Sandside, where a cist had been discovered in the mid 1970's by Gertie Seatter, then of Sandside while out walking her dog.  A skull was spotted poking out of the shore line after a storm and after some excavation work a single burial cist was found (radio-carbon dating put it around 11th Century AD - apparently a time when the isles were becoming Christian, and there were elements of both pagan and Christian burial. There were no "artefacts" found with the burial).


Although there is little to see at the site now, we did explore a little along the shore and Dan pointed out a potential earlier settlement site than the current 19th Centuray buildings, with flagstones lower down the soil base, and some signs of a midden with shells embedded.  Though it has to be said interest soon turned to the beach itself and searching for shells.  We told the visitors of the Graemsay tradition - you're not allowed to leave the "shell beach" until you've found a "groatie buckie" (a mini cowrie shell).  Some frantic searching took place as folk thought they would miss out on the hot soup for lunch if they couldn't escape from the shore!

Attention turned to the old croft of Quoys and a hunt for an old click-mill, then onto Hoy Low to explore the WWII relics - the old gun battery and lookout tower. I have mixed feelings about the brutal concrete structures in the soft landscape, but they are very much part of Graemsay's history and it was interesting inspecting them with "someone in the know". Dan explained that the battery was actually constructed quite late in the war. In fact the walls around the gun emplacement were unusual as they were well made with stone, whereas many others in Orkney were hastily constructed and the walls made of shuttered concrete. Dan also told us that the guns that were positioned there had been moved from the island of Burray once the Churchill Barriers had been constructed. The guns were no longer needed at Burray as the barriers were now the protection for the Naval fleet in Scapa Flow. 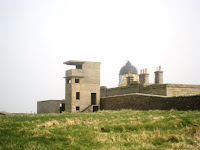 The gun battery on Graemsay linked up with that on Hoy and at Ness on the outskirts of Stromness, protecting the entrance to Scapa Flow.  As well as the gun emplacement and lookout tower, there were also magazine stores and search light points, generator sheds, and the remains of the concrete bases of accommodation huts with fireplaces still in situ.

On a misty day it was easy to understand how those deployed to Graemsay thought they had reached the "end of the earth" - and how cold and bleak it must have seemed on a winter day. 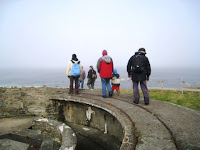 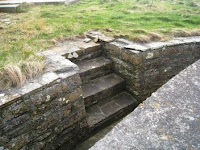 Also at Hoy Low is a site thought to be an early Christian church, St Colms. There is evidence, apparently, of some foundations of the early church, though the WWII generator building foundation seems to have been dumped on top of part of the site! 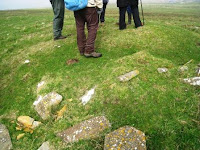 The party then moved onto Corrigal, an old croft, now unihabited.  There was a steep descent to look at the croft and another "grassy mound" which was thought to be an early site too, though as Dan said, without supporting evidence it was hard to say what it might have been or when it was built. One of the visiting children was heard to wearily say "Oh no not another grassy mound!"  Dan bore this with fortitude and explained that an archeologist's lot was often staring at grassy mounds.

Finally the mist begins to clear and the visitors could get their bearings..... Hoy Hills in the background. 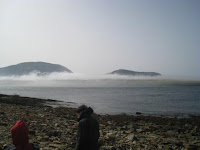 The old croft of Corrigal 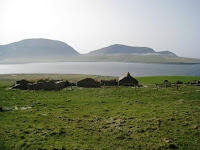 However even the flagging spirits of the children were revived by lunch in the community hall, with hot soup, tea and cake after which Dan gave a talk, placing the archaeology and WWII heritage in a wider Orkney context. Then there was time for another foray, this time meandering along the shore via Sandside and the Hoy High lighthouse back to the pier just in time for the ferry home. 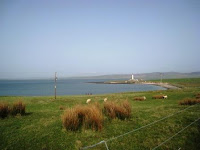 We folk on Graemsay thoroughly enjoyed the day and the company, and thanks are due to Dan for making it an informal but informative day!
Posted by Sian at 14:00 12 comments:

The lambing season in Orkney starts from about April - much later than in the south of the UK. So this week wee lambs have been appearing in the fields.  However some are earlier than expected due to the bad weather. While the BBC Weather-people have been crowing how it's been the hottest day this year for most of England, in the North East corner of the UK it's been raining constantly with intermittent gales....sigh.... Consequently the ewes have been dropping their lambs early.

I heard (on a farming programme) that the ewes do this in poor weather as their bodies know the lambs are near to being born and so may well survive, and that the ewe's body is at it's limit, so for optimum survival of the ewe it will go into labour. The shepherds on the island have been out checking their flocks and removing the ewes with lambs to more sheltered spots, providing feed etc.

Thankfully we are forecast some respite with SUNSHINE this weekend!  I love seeing the lambs in the field so hopefully they will be bouncing and leaping about once they get the sun on their backs!

(Photo above was taken just opposite my front door).
Posted by Sian at 20:54 2 comments:

Email ThisBlogThis!Share to TwitterShare to FacebookShare to Pinterest
Labels: spring 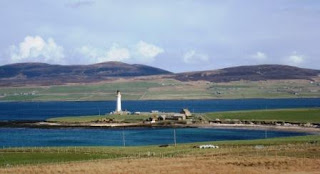 Well I ask the question because Monday and Tuesday the wind howled and the rain came. I probably shouldn't complain about the rain as March was the driest for about 50 years I think and rain is needed to make things grow.... but so is SUN!  But Sunday was a glorious day as these photos show. Above is Sandside Bay, and the Hoy High lighthouse. The hills in the background are in Orphir on the Orkney Mainland.

Please note - the next two photos were taken at DAWN on Sunday.... as folk who know me realise only to well - I do not frequent "dawn"..... however beautiful it is..... and no I didn't stay up to see how this one developed!  I'd wandered down to the kitchen just before 6am for a cup of tea having lain awake unable to go back to sleep.  The first cup of tea in the morning is the best - whatever time.  However I WAS drawn to the light from the window and stepped outside in my pyjams and wellies to take these two photos.

I was astonished to find some flowers in the walled garden already. It cheered my heart to see them! 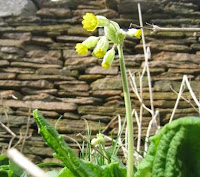 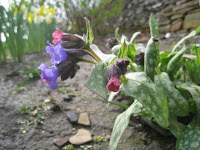 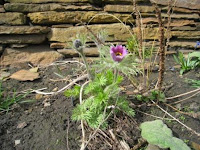 And for another Orkney Blog you might enjoy click here (she's a real "planty person")
Posted by Sian at 16:00 8 comments:

Last year I mentioned the archaeological dig that was taking place at "Banks'" in South Ronaldsay, one of the linked islands off the Orkney Mainland.  Season two has just started and Dan Lee, one of the Archeologists from ORCA (the Orkney Centre for Archaeology) has been posting some YouTube footage. There are other clips too if you go to Youtube and take a look. It's fascinating seeing a site unfold.

Dan is coming out to Graemsay on Saturday - not that we have made any new discoveries, but he's going to talk to us about some of the WWII history and take look at a couple of the sites of early Christian churches - though nothing is left of them now.

Anyway take a look at the video and see what new discoveries have been made on Mainland Orkney.