A mixed bag of Spring Weather! 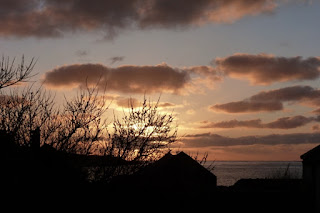 The weather forecasters always talk of "April showers" - well there has been rain, hail, sleet and snow for the last week!  But lots of sunshine too.  The sun is now setting past the tip of Graemsay so I KNOW Spring is here.  And the days are definitely longer now.  Sunset will be 20.54 tonight.

And there are lambs in the field!  I feel so sorry for them though in this changeable weather.  I want to bring them all indoors!  Here are just a couple.  The ewes and lambs are numbered so the farmer can tell which lamb belongs to which mother when doing the head count.

When the sun comes out there is warmth in it and it is a joy to see. AND we are having more sun than not.  This next photo was taken on a calm day....  This is the "main road" round the island! A single track of tarmac. There are no "formal" passing places so you need to judge your direction just right at boat times or there's a lot of frantic reversing so folk can get to the pier in time. 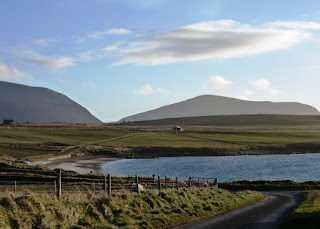 The hens enjoy being out in the sun, and the grass is coming through nicely in front of my house so they are happy to peck away at that.  In the background of this photo is Stromness, across the blue water.  Lots of sky in the photo is deliberate.  I love big skies! 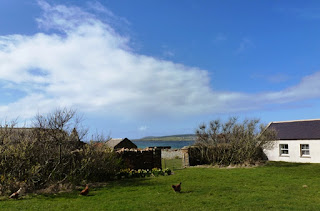 And a wandering male pheasant!  Not native to Orkney but introduced to the island some years ago.  Not prolific breeders (or at least not successfully!) but there are always a few around. 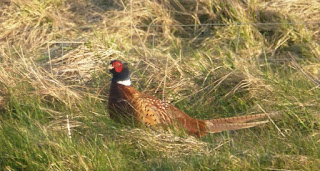 And then there is the weather over the last few days..... choppy seas, fluffy clouds and blue skies during a gale yesterday. 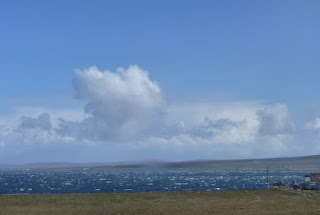 Hail/sleet shower over Hoy in the distance. 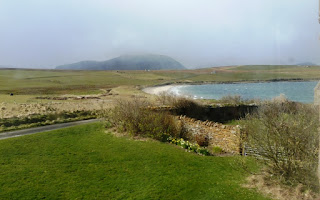 Hail battering the study window at the back of the house yesterday. 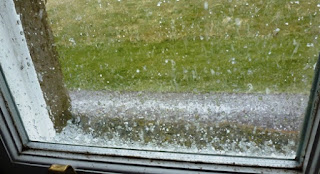 And a slightly warmer reminder to finish this post - a sunset. with the sky ablaze. 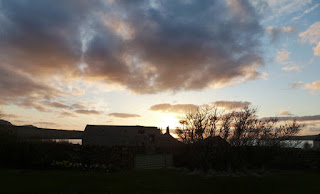 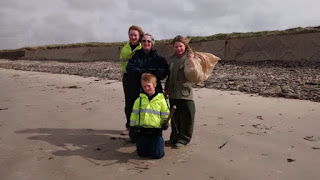 "Bag the Bruck" is an annual event in Orkney and is the time communities go out collecting bruck (rubbish) from around the beaches.  Not only does it make the beaches look better, but more importantly it helps the environment and all the marine life and birds that live along the shore.

This year Team Sandside were out in force - Irene from Breckan, who together with myself, co-ordinated our team which was made up of Becky, Katiem and James Braddock.  They did all the scampering around among the dunes, sand and rocks collecting all sorts of bruck.  They are very switched on to this and James was explaining how the rope and string on the beach might catch around the feet of the birds and they would die, trapped on the shore.

Becky valiantly helped remove the tyre from the beach which had been full of sand. It was a joint effort, I spotted the tyre, James scooped out all the sand, and Becky carried it up to the road.  I asked her if it was too heavy for her to carry, to which she replied "It's lighter than Mum's handbag".  Hee hee.... 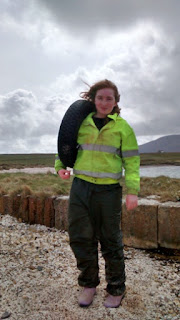 James collected driftwood with a vengeance.  I'd spotted this wonderful long piece of driftwood across the beach, but gave James the chance to get it as I'm sure a wee boy will have more fun with it. He said he's well armed against vampires now. 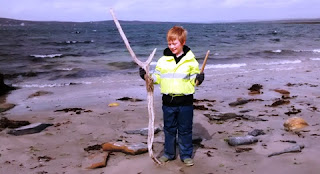 It was a very cold, windy day and sand was blown into our faces, but we valiantly carried on!  The two beaches we cleaned up were actually not too bad. They are the most frequently visited and most folk try and remove any litter or "bruck" they see.  Though as Katie said, it was remarkably clean considering there was nothing between it and Canada!

So thanks kids for an entertaining time, and you will now be a permanent addition to Team Sandside, which used to just be made up of Irene & myself, and formerly her old dog, Shandy, and once, HRH Princess Button.  But Button stayed indoors snoozing today. Way too cold for a puss cat to be out and about.

Other folk on the island will be doing other beaches and then all the bags will be sent over to be collected by the local authority for disposal.  All around Orkney over the last two weekends lots of groups will be "bagging the bruck".  A great community effort.

The old pier at Sandside

(Click on the images to see in the "lightbox" - bigger!)

There is a lovely old pier that separates the two beaches I walk on most days.  On one side is the curve of Sandside Bay, a sandy beach with a few shells, but not many, and on the other side is the coral beach and lots of rocks.  I always imagine there is a sub-sea roundabout with directions to each beach depending on whether you are sand or coral and shells.  Hee hee.

Anyway, this pier was built around 1860 specifically for the building of the two lighthouses on the island, Hoy High and Hoy Low.  The "Lighthouse Stevensons"  built most of the lighthouses around Scotland over a 150 year period, including the two on Graemsay.

The stone for the towers and lighthouse buildings were cut over on the Orkney Mainland and then shipped across to the pier at Sandside and taken by carts to the each location.  I'm not sure where the stone originated from, but it will have been one of the quarries in Orkney I would think.

Anyway, back to the pier.  It has always fascinated me as it just appears to "sit" upon the rocks.  I have NO idea how it was built but I love it's shape and form.  So here are a few photos. In some ways it's a tricky pier to approach by boat as there are lots of rocks on one side and as the tide goes out it's easy for a small boat to hit these, but there IS a channel safely through - you just have to find it!

Here the pier ends and joins the land.  Various efforts have been made to stop the coastal erosion around it, including cement bags, and dumping loads of concrete blocks!

This is the familiar view as I approach each day (usually with Button!).  Stromness over in the distance and the Point Of Ness (near the white pointy marker in the water just to the left of the harbour) where the stone for the lighthouses would have set out on it's journey across to Graemsay.   At low tide you can see the rocks! 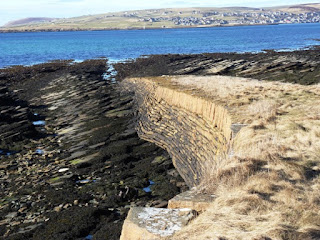 I love the curve in this pier, a bit like a "buttress".  This is the bit that Button usually walks down. 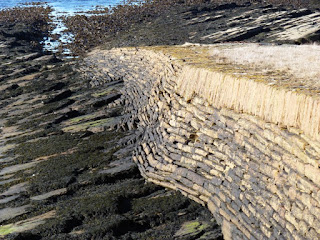 This is at the end of the pier, just to the right in this photo.  Steps leading down to the rocks.... 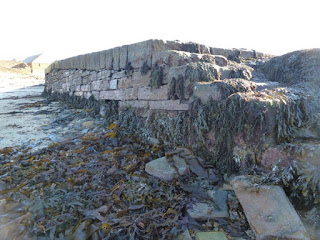 At low tide you can walk right out - though it's quite slippery with seaweed.  When the tide is in this makes a nice natural pool to swim in. 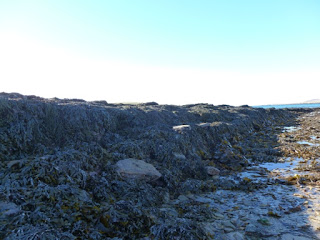 When you are standing in the "pool" at low tide the rocks rise up around you..... 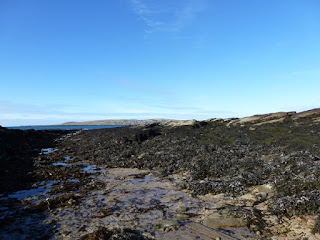 This might be a better view - probably should have taken pier photos on a dull day! I love the stone work... 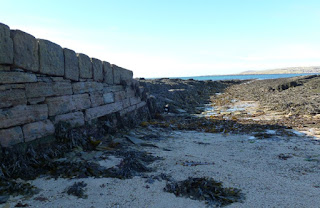 And here is another familiar view! 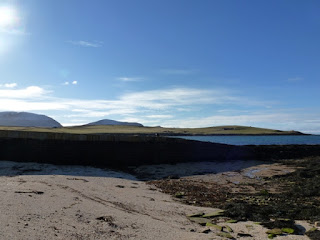 Both Button and I love this old pier - as you can tell as it features in most of our beach photos :-)