Oh Calamity! I drowned my camera! 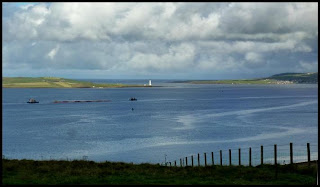 So this lovely picture is courtesy of Derek Mayes, my camera guru, who has been advising me on a replacement. It shows Graemsay on the left, the Orkney Mainland on the right, with Stromness on the far right. And in the mid-ground is the "sea snake" - part of the wave technology being tested out by one of the local renewable energy companies.

As you can see on Graemsay, from the pattern of the fields, silage and hay cutting is still ongoing.  It's been poor weather this summer for growing silage/hay and the farmers are struggling to get a crop in for animal feed for the winter.  The weather is warm enough now, but lots of rain showers mixed in with sun so not very conducive to baling silage or hay!

Back to my poor camera...... I popped it into a pocket in the car when I went to the pier.  Unfortunately the screen wash bottle had leaked and there was a pool of sticky liquid in which my poor camera sat for an hour or so..... I wiped it and let it dry out but all the stickiness has gummed it up so I shall have to invest in a new camera.

Derek has recommended a Panasonic Lumix (compact) camera which I hope to get next week. It's a better specification than my defunct Canon Ixus so I'm looking forward to playing with it!  And yes of course the photos will be appearing here!

It's been one of those weeks for me really. Nothing serious, just little things going wrong. I've had trouble with my ride-on-mower/tractor as it wouldn't start. A couple of neighbours have been jump starting it for me. It was a bit incongruous on Sunday when Mick used his jeep to jump start my wee mower! Mick's tested the battery and stuff and all seems OK. So I'm not sure what the problem is and once the silage baling has finished I'm hoping one of the "tractor mechanics" can take a look at it.

One of my hens hatched a chick last weekend - it was a surprise to us both I think. She'd been sitting on one egg for ages and I hadn't paid much attention. I leave a marked egg in a nest to encourage the hens to continue to lay and then take the other eggs each day. Of course if she has been brooding it, then it would hatch. Which it did..... sadly though she is a "new mum" and never hatched chicks before. She obviously didn't look after it properly as it disappeared. It was safely in the hen house and I *thought* safely enclosed. But either she left it and one of the cats got it, or she took it outside and one of the crows or other birds had it.  She was a bit bewildered for a day but seems OK now. Though she's laid another egg and I suspect she will try and brood that one now.... Another hen is sitting on a small clutch of eggs too.  Still, although I have 5 chicks (ranging from a month to about 3 months) at least there are not as many as last year (I ended up with 35 birds....gulp!).

Is this cat wearing a guilty look???  Nah - butter wouldn't melt!  This is Charlie, the barn cat. 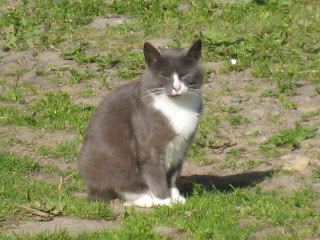