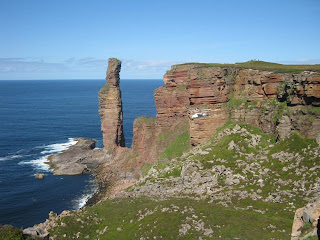 It's been a glorious day today, but no I haven't been hiking the hills of Hoy. These photos were taken by a friend, Jenny, who was over on the neighbouring island of Hoy today. As you can see it was a fabulous day to be out walking. Above is the "Old Man of Hoy" a sandstone sea stack, a favourite with climbers.

Meanwhile I was spending a more leisurely day pottering. Mowing the grass, some light weeding, a few domestic chores and lots of sitting outside drinking tea!  Pure bliss.......

Hopefully picking up my new camera tomorrow so will post some pictures taken with it during the week..... You need a head for heights with this one! 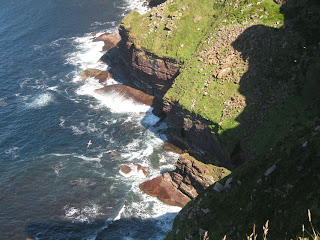 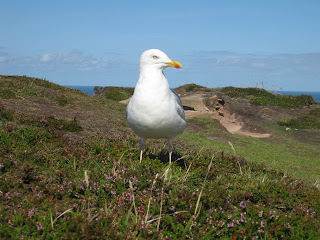 Speaking of gulls and seabirds in general, there was an excellent programme "Springwatch" on TV this week. UK readers may have seen it (sadly unavailable outside the UK). Most of it was filmed in Orkney around a number of the RSPB bird reserves.  Sadly the Orkney population of Kittiwakes is on the decline, possibly due to a reduction in their main food of sand eels. Scientists are still unsure what is causing this but potentially climate change.  However the number of gannet pairs in Orkney is increasing which is great news. Gannets often dive just off Graemsay. It's a wonderful sight!

Time for another cup of tea while gazing at the moon I think....... (accompanied by the sound of tractors as hay and silage is brought into shelter - weather forecast not good for the week - ho hum).
Posted by Sian at 21:40