Each year, since excavations began in 2003, the Ness of Brodgar archaeological dig has been giving up it's wonderful secrets.  Though not all - it's still unclear what the purpose of some of the structures were or why the entire site is there.  It sits within the heart of the Neolithic Orkney World Heritage site, sandwiched between the Ring of Brodgar and the Standing Stones of Stenness.  The site is being excavated by ORCA (Orkney Research Centre for Archeology), overseen by site director, Nick Card.  If you want more detailed info take a look at the website.  But briefly, the site dates from about 3,300 BC and it seems that it began to be dismantled about 2,200 BC.

The BBC have run a number of programmes, presented by Neil Oliver.  There is a new series of 3 programmes due to be broadcast which also involve Chris Packham (TV presenter and naturalist). The world media has also been filming at the site these last few summers.

Earlier this week some news from the site hit the UK media as some unusual stone slabs were found underneath a midden (rubbish dump) and may be one of the first structures on the site. Click here for photo and brief report

Anyway each year I go along to take a look. I love watching the archaeologists painstakingly working their way through what to me looks like mud and rubble!  Students of archaeology as well as qualified professionals come to work for the 6 week period in the summer.  Now the dig is being wrapped up again until next year.  The work doesn't stop there though as the team spend the winter cataloguing and carrying out further research on all the "finds".

Here are some photos taken this summer.

The walls in the centre of this picture are as they were found.  They haven't been "rebuilt", just carefully excavated. 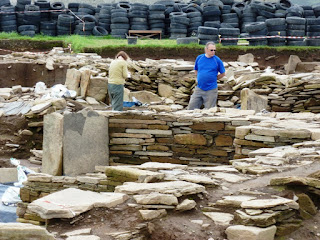 The house in the background was purchased by a benefactor and given to the ORCA and is used for storage - as well as the flush toilet. A bit of a luxury on a site I'm told!  The tyres are used at the end of the dig to weight covers down until the next season.  Hopefully that preserves as much as possible and stops any weather damage. 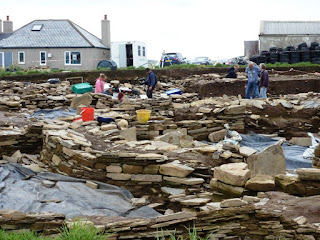 I mean....how DO you make sense of this!  Yeah I know - years of training! 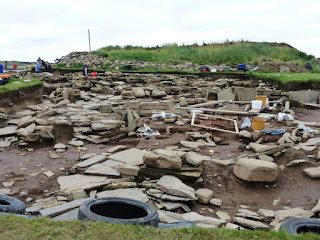 Heads down on with the work.... I would imagine sore knees is an occupational hazard. 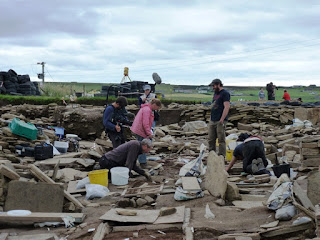 A film crew (not the BBC this time) busy recording 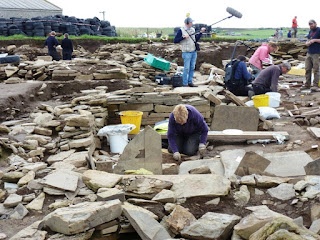 The site is extensive with a number of structures, and in one corner what appears to be the remains of a "standing" stone. 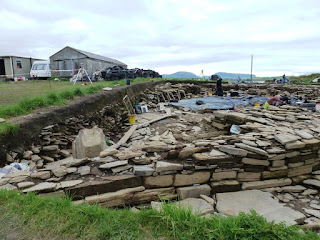 As I say, the site is extensive, these next two photos show the whole site from the viewing platform. 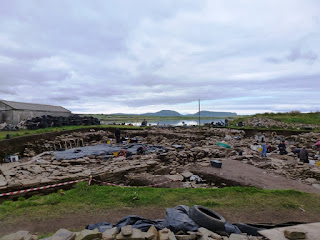 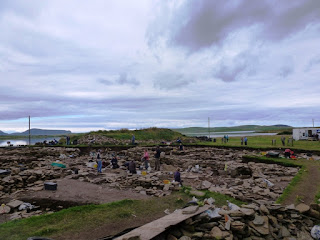 And daily artifacts are appearing.  This is a stone pot just dug up that day.  Stone pots are very unusual and this is the first found at the Ness dig. Most pots were of various types of - er - pottery. There will be analysis to see if there is any pigment in the base, as some decorative art has been found at the dig. It was amazing to think that I was one of the first people to see this in millennia... 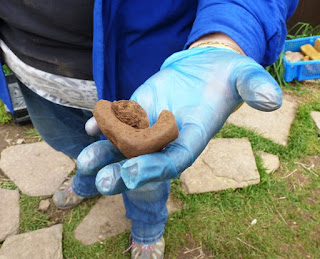 One of the team is carefully cleaning what seems like an ordinary stone till he turns it and shows the sharpened edge. A tool of some kind. 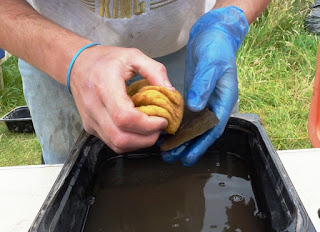 Meanwhile the Hoy hills look upon the dig in 2016, just as they did when the structures were first built. I love all that "timey wimey" stuff (to quote Dr Who!).