At the beginning of June I went South for a few days and returned on the ferry from Scrabster to Stromess.  This sails past the island of Hoy on the *other side* to the bit of the island I usually see. The sun shone on the sandstone cliffs and they positively glowed.  My photos don't do justice to the view but I thought I'd share some of them with you anyway! (I was feeling a bit sea sick as I'm not good on boats, so the photos are a bit random!).

Hoy means "High Island" and it's aptly named as it is the highest of the Orkney islands. From Caithness (the county that the Scrabster ferry terminal is in) to Hoy is about 10-12 miles. So from the terminal I could look across to "home".

The sandstone cliffs are quite magnificent, and as the rock is quite "soft" there are arches and crevasses being formed all the time. 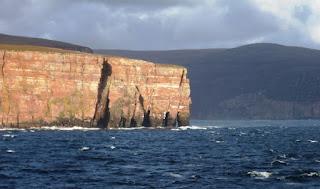 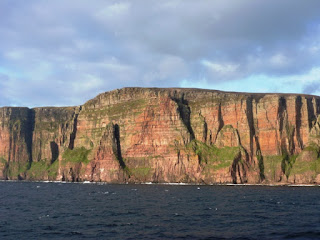 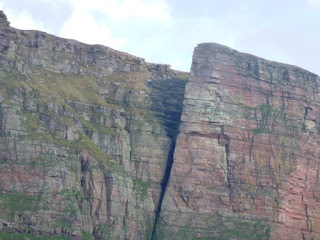 And there is the famous sea stack of The Old Man of Hoy (from a certain angle you can see a face).  Even today this can be a challenging climb, and every year climbers travel across to Hoy to get to the top.  I think there's a lot of climbing "junk" attacked to the rock face from all the attempts. 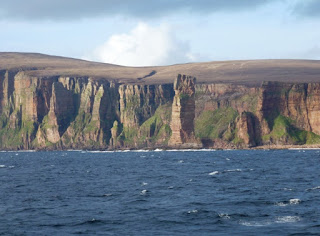 Although the "Old Man" is just "around the corner" from Graemsay, the only time I see it is from the ferry. Although years ago I did walk across the hills to see it from land too. 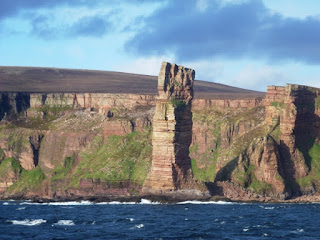 The stack is just under 450 feet high.

In the same area are St John's Head, which is the highest vertical sea cliffs in Britain at 1,154 feet. 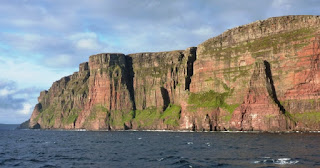 It was a beautiful evening and I had the back deck more or less to myself.... 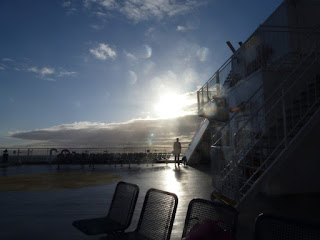 As we came round the corner towards Stromness the cliffs merged into green slopes with a few houses dotted along the top. Now that IS remote! 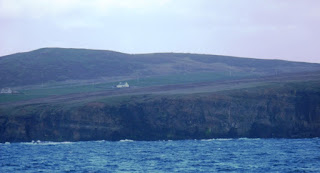 The light was fading fast but you can just make them out... 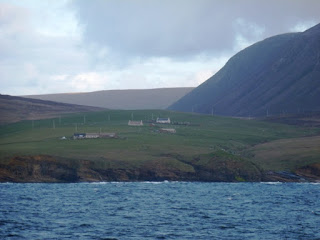 The cliffs getting lower and lower, and everything turns from the russet colour of sandstone to green as it leads down to the sea.

And then Graemsay comes into sight with both lighthouses visible.  Hoy High in the distance, and Hoy Low nearer.  Actually both are called "Hoy Sound" (high and low light) because they are in the mouth of Hoy Sound.

Hoy Low, with the WWII gun emplacement and control tower on the shore. 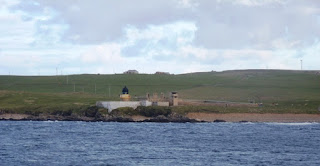 And no, the lighthouse is not listing, it's the boat!  It has to make a tight turn to get into Stromness harbour! 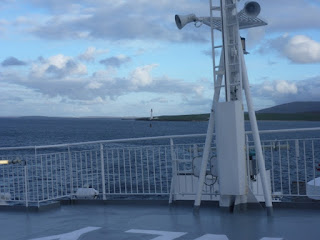 And there waiting to take me home was the Chieftain, the wee replacement ferry we had for a few weeks.  It was fun being away, but I do love coming home again! 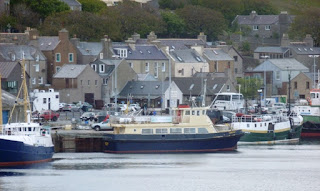