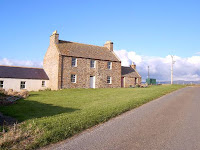 Yesterday I did at least manage to cut the grass at the back and front of the house, despite a rather chilly south east breeze. But it was dry and that was the main thing! The grass around the house is just regular “field grass”, not fancy lawn grass, so I need to keep it cut regularly to control it. I tend to put the mower blade on the medium height setting so that the dasies don’t get cut to within an inch of their lives. I love daisies as they are such happy flowers. However it is Death To Dandelions!

It took me a couple of years to get the grass looking reasonably neat and tidy as it hadn’t been cut for many many years, and in fact was probably only cut about twice a year when the farmer had the mower attached to the back of the tractor when cutting the fields for silage or hay. The first year I moved in I got two silage bales out of the front “lawn”! The picture above was taken a couple of years ago and I've managed to extend the "cultivated" part a bit more since then.

Today has been wet with some heavy showers. I do feel sorry for all the wee lambs out in the fields when it rains! I have to resist the temptation to gather them all up and bring them indoors. But it is surprising how quickly they grow and get their own thick woolly jumpers!

For several years the old walled garden next to the house has been turned into a nursery for ewes and lambs that needed a bit more attention. However my neighbour is lambing later this season and hopefully the weather will be kind and the “intensive care unit” isn’t needed! The sheep weren’t mine so I only had to keep an eye on them and report any problems, but I did like watching the wee lambs. Though they could be a bit noisy at night – particularly when the lambs would escape out of the garden but not be clerver enough to work out how to get back *in* again – much bleating ensued – from the sheep and me through lack of sleep :-) 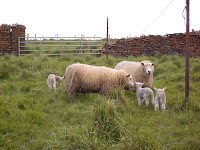