Friday was a "day in town". It was a beautiful frosty morning, still, clear and bright in Stromness. So I decided to take a drive out to Stenness and go for a walk along the shore of the loch before my morning appointments. The loch has "brackish" water as it's also fed from the sea, so an element of salt is in it, however it still freezes. The best photos were from the top of the hill but I couldn't stop the car as there was traffic behind so had to content myself with "ground level" photos. 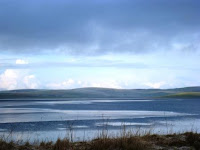 Despite some ice the swans were still able to swim around the loch. In the background you can see the neolithic stone circle of the Ring of Brodgar. 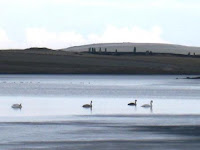 And this is an optical illusion - it is two stones from the Standing Stone circle at Stenness. The sun was shining on Stromness and the West Mainland but in the East were snow clouds gathering and I drove into Kirkwall in a blizzard! 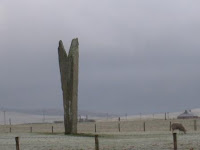 But on returning to Stromness - not a snow flake in sight! Below is the ferry, Hamnavoe, which travels between Stromness and Scrabster in the North of Scotland. As you can see - the ferry dwarfs the town buildings. 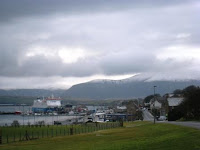