OK it's deepest darkest January but I need a reminder of summer sun and abundance! So here are some "before" and "after" pictures of the walled garden which I've been renovating over the last 18 months (with the help of Arthur of Fillets and his digger, tractor, plough and harrow!).

First a "before"! This part of the garden used to be a silage pit many years ago, and in recent years held sheep during the lambing season.

And another one....the rough grass and weeds were killed and burned off.

Then last spring the borders were planted with perennials, trees and shrubs. Here are some in their first summer 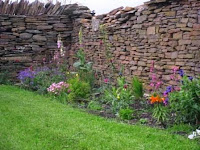 And a bright fresh "lawn" and the veggie patch, which produced a wonderful crop. 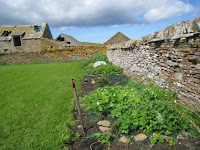 In the autumn I put plastic silage matting on to prevent weed growth in the veggie patch. I'm hoping this will enable me to get the weed growth in flower borders under control early spring and then be ready to plant veg again late Spring.

I have one more border to plant up, as the stone dyke at the front of the garden was repaired during an island "workshop" in June last year, as regular readers will remember! (see more here and here) 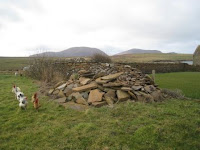 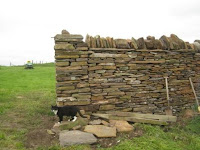 So lots of work to do in the Spring and Summer!
Posted by Sian at 11:00