That isn't something that I say very often in Orkney! But today it HAS been too hot. It's probably been in the low 70s F. Which for Orkney is HOT! It's about as much heat as I can take, any more and I just wilt. But I just love, love, love the warmth. I sat outside the house on my garden bench and drank tea. But it was too hot to do anything in the garden till about 5pm when some shade began to descend on one end of the veggie patch and I could, at last, plant out some of my courgette plants that I'd grown from seed. I also needed to weed among the broad bean plants which are coming along well.  Sadly my carrots seem to have failed this year. No idea why. I planted several varieties in the bed from different sources but not a carrot in sight. Ho Hum.....

Button has been enjoying lazing in the sun for short period but even she found it too hot. Below she's giving herself a wash - look at how long her tongue is!

And here are some fuzzy oystercatchers - well they're not really fuzzy but they are a bit out of focus. However these were in the *garden*! I think these are adult parent birds and a young-ish chick. They are often in the garden recently and scold me if I have the temerity to go there myself! 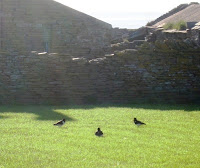 Earlier today I brought Ethel down to see the progress in the garden. Ethel is in her 80's and is the oldest Graemsay-born resident on the island. She was telling me how she remembered old Mrs Sutherland, who used to live in this house till the death of her husband, John Daniel, in the mid 1950s. Apparently Mrs Sutherland would hang her washing out to dry in the walled garden (I still use the same washing poles), and she grew lettuces and other veggies along the wall where I now have *my* vegetable patch.  I'm glad I'm carrying on the tradition.

The photo at the top of the post was taken outside Ethel's house, Western Horn, down towards Scapa Flow. Hoy High Lighthouse and Sandside are on Graemsay, but the hills in the background are in Orphir, on the Orkney Mainland.

Oh and earlier today apparently there were Orcas coming down past Graemsay and into Scapa Flow. Sadly I didn't see them but my neighbours did. I've instructed them to let me know if they see them again - even if it's early in the morning. *Some* things are worth getting up for - tee hee!
Posted by Sian at 21:46