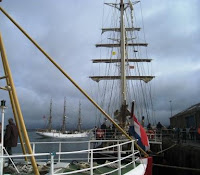 I've just returned home today after visiting family in Guernsey (Channel Islands) and Hampshire (England), but more of that later. I arrived back in Orkney just in time for the Orkney leg of the Tall Ships Race. Most of the vessels are sailing up to Shetland but a number have put into Orkney on their way. Several sailed from Kirkwall in the East of Orkney, round to the harbour of Stromness in the West. I managed to see some of them on my way back from the airport in Kirkwall.

The town of Stromness was really buzzing this afternoon with lots of visitors awaiting the arrival of the ships. Only one came in under sail, most dropping their sails further down the coast and motoring into the harbour. But they were still a sight to see!

I'm off to Stromness again tomorrow to enjoy more of the spectacle so you will have to bear with me for a day or two until I get "caught up" on things!  Meanwhile, above is a photo of two of the "tall ships".
Posted by Sian at 21:18