...... there's a lot of it about!  Well there was last week.... shhhh we're going through a quiet, mild spell at the moment... it won't last but I'm making the most of it!!  Anyway in a brief gap in between work, getting sorted for Christmas and sleeping - here are some photos of the recent Weather!

Storm approaching - lightning, thunder, hail, sleet, huge winds, and finally a little snow. Power cuts in Orkney but Graemsay was OK thankfully. I think some people lost their internet connection with fried modems, but otherwise all was well.  Not even much damage from the wind... Phew! 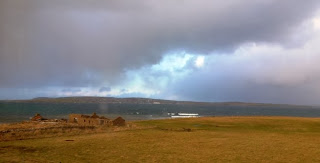 Hoy Sound was white with horses..... 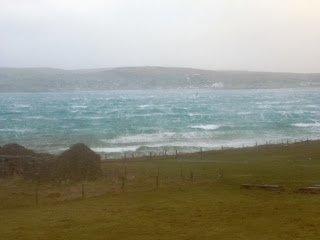 Waves were crashing over the main road on the island making it impassable for a while at high tide. Not that there was anywhere to go. All ferries were cancelled, staying safely in harbour.

Did I mention snow?  Not much of it - the wind was blowing too strongly for it to stick to much! Though I think there was some drifts on the Orkney Mainland. 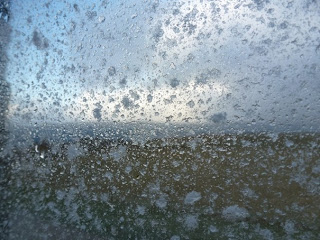 A light dusting over the town of Stromness 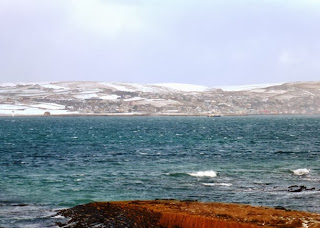 Snow showers sweeping past.... the tractor tracks leading to the sheep feeder at the sheltered side of the field. 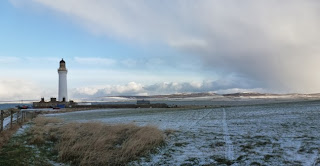 And here are the sheep! 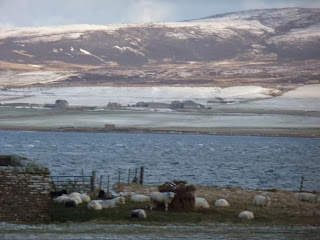 And the Stromness to Scrabster ferry came "up the Flow" - always happens in windy weather as it's more sheltered.  So once the wind died down the boats were running again.... shelves in supermarkets were restocked and supplies sent over to Graemsay - I nearly ran out of tea bags. Oh calamity! 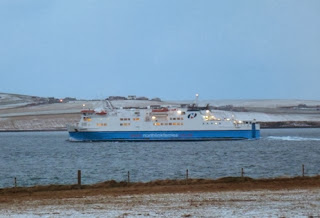 And of course if I was going out for a walk, Button had to come too.... 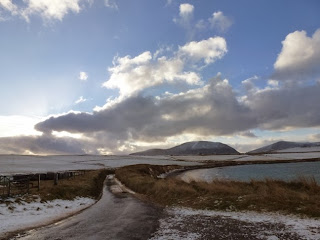 We were soon home, me with a cup of tea and cake, and Button with a light lunch and a snooze on her bed warmed by the underfloor heating!

And in the afternoon a wintery sunset..... 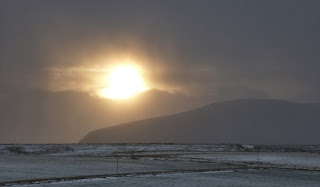 The snow disappeared the next day and mild weather with the odd chilly wind and some rain has characterised this week so far.
Posted by Sian at 21:44