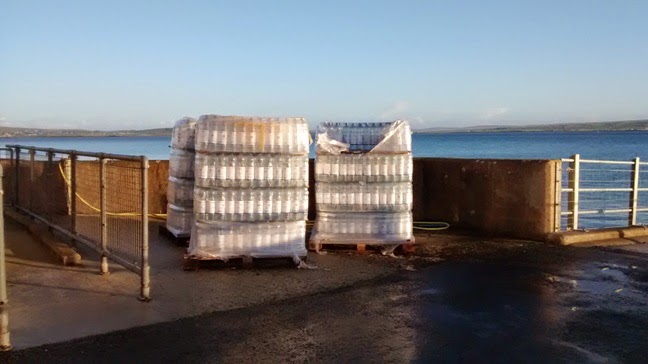 ... yup, you guessed it, not a drop to drink!  Well not strictly true. As you can see in the photo above there are pallet loads of bottled water to drink. It's just not coming out of our taps!

Since the weekend there has been a leak in our water supply and Scottish Water workmen have been trying to find the source of the leak.  So far without success.  Our supply comes from the Hoy hills into the Sandy Loch, through a water treatment works, then a subsea pipe to the water tank on Graemsay.  It now seems highly likely the leak is in the subsea pipe.  But work is ongoing to locate that.

Meanwhile some neighbours had no water on Sunday and others have been losing supply progressively since (depends how far up or down the hill you are!). The situation is ongoing.  Not quite so critical for humans with access to the bottled water. But a worry for farmers with over 100+ head of cattle in the byres, most in-calf cows. As well as Scottish Water sending out pallets of bottled water there is now a "multi-agency" response co-ordinated by OLEG (Orkeny Local Emergency Group. The Group includes (I think) folk from the local council, health and social care, fire, police, etc. So the Fire service have been checking their contingency plans, and the Red Cross came out yesterday. Mmmmm I was a bit startled at that too. But the three folk who came over are all volunteers, lovely helpful folk, and went round each house on the island to check folk were OK, to hand out hand gel and wipes, and help where it was needed and passing on information as they were updated. 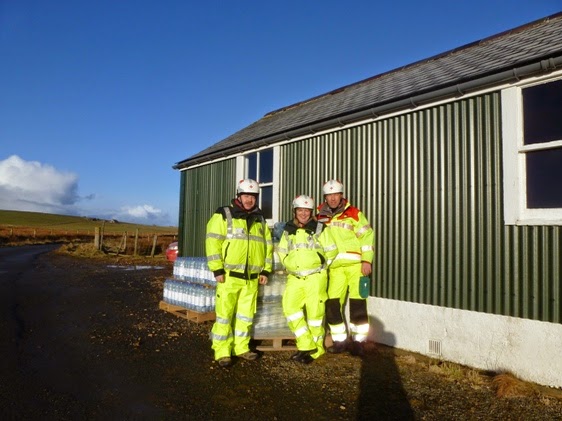 Graemsay is a close knit community and so folk have been looking out for each other anyway but it was good to know that we weren't being "forgotten" or ignored.

Scottish Water officials came round each house too explaining what was happening.  They also offered folk the chance to leave the island and stay in a hotel in Stromness till the water supply is back on, or to go and use showers and washing machines. They would provide boats and necessary transport and cover all the costs.

The plan is to get water over here in tanks and pump it back into our water system so that we can have water out of the taps again while work goes on to sort out the bigger problem of the undersea pipe.  But we live on an island with a ferry that does lift on/lift off and so there is the additional challenge of national agencies on Mainland Scotland having to understand from their "men on the ground" that "get water to Graemsay" isn't quite a straightforward as it sounds.  Vessels have to be hired, water got to the correct point etc etc.

Anyway as of this morning there is a tank on the pier for farmers to be able to get water to the livestock.  So that's a relief to the farmers and their coos!  Hopefully there will be a regular run of boats continually bringing water to pump into the system and by the weekend I might be able to have a shower!! The main need is that the supply continues and is able to keep up with demand. We don't mind being "economical" with water but do need to have it coming out of taps, and to flush toilets, feed cattle etc.

Folk on the island are generally happy now there is more information coming through. It was frustrating in the beginning when it was just a case of phoning the central Scottish Water number somewhere on Mainland Scotland and having to speak to very helpful and understanding customer care operators, but with no decent information to give us.  And we can SEE things are happening now... like this wee digger arriving yesterday to help dig out near the shore where the pipe goes underwater. I believe a larger digger is due today.

And through all this "excitement" I've been trying to work with a very busy schedule - which is why it's taken me this long to post this update!
Posted by Sian at 09:38