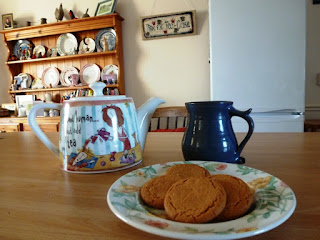 Sadly last week most of the island went over to Stromness to attend the funeral of Ruby Manson. Ruby had been born into the Skinner family at Gorn on Graemsay  (she was in her 80s when she died).  She met and married Jimmy Manson from Shetland who was working at Sandside at the time. They had three children, now all grown up.  Lawrence living in his father's native land of Shetland, Irene living in Stromness and Sandra now raising her own family on Graemsay with her partner, Michael. Ruby moved to Stromness in 1980 and lived the rest of her days there.

The funeral was very much a way of giving thanks for Ruby's life.  She was a keen member of the Strathspey & Reel group as she was great on the fiddle.  "A fine fiddler" is a  compliment in these parts!  Ruby was certainly that, and could play along with many a band, and pick up a tune just by listening to a few bars.

Until recently Ruby would visit Graemsay for all the parties.  Here's a photo of her on the left, playing the fiddle along with Fran Gray on accordion at a party in 2006. 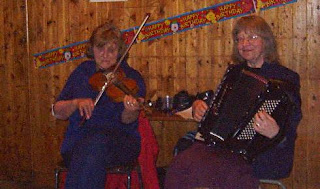 The Strathspey & Reel group played at the funeral as folk were gathering. It was lovely hearing the old kirk filled with the favourite tunes of Ruby's.  There was a short service then folk went out to the kirkyard at Warbeth for the burial. When folk returned there were large trays of sandwiches and cake as well as tea or a wee dram and folk shared their memories among music being played.

Now.... Ruby's teapot.... where does this come in you ask.  I should really say Ruby's teapotS, as she loved collecting them.  She had a collection of over 400, then a few months ago got rid of some but still had about 350.  The family had the delightful idea of lining the kirk with some of her collection and invited those attending to take home a teapot and think of Ruby when they use it.  There were pots of all shapes and sizes.  Ruby's grand-daughter, Katie took me round them all and told me which were her favourites and where Ruby used to have them in the house, "In EVERY room" Katie said.

The one I chose is most appropriate for me.  Anyone who knows me well knows I must have a constant supply of tea and not to speak to me until I've had at least TWO cups of tea in the morning. So in the photo at the top of the post, introducing  "Ruby's teapot" in Sian's kitchen!

And a closer look shows just why it's perfect for me.  "Instant human just add tea". Hee hee! 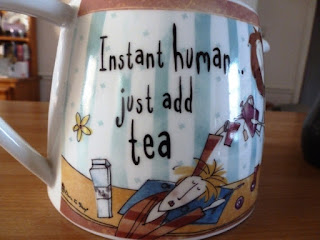 So farewell Ruby, thanks for many happy memories of you playing at Graemsay parties, and for your teapot, which I will use regularly and share the story with visitors who stop by for a cuppa.