Of dragons and damsels (Part 2) 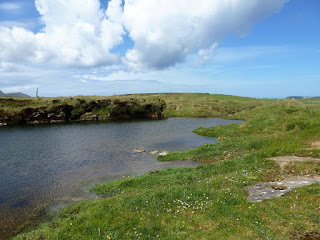 So here we are back at the quarry a week or so after yesterday's post.  This time I'm flying solo (ha excuse the pun!).  The day before I'd brought a friend from Stromness here and when we had first arrived it was quite dull and nothing was to be seen of damsel flies (no dragons spotted on Graemsay to date).  So we enjoyed looking at the wild flowers and the various fascinating pond skaters and other pond insects.  Then the sun came out and as if by magic, about 15 or 20 damselflies just lifted off the pond.  They were everywhere, you couldn't miss them, even though they are matchstick size. Their colours are so vivid. Even without binoculars or camera. Cos yup dear reader I had forgotten both!  But actually it was lovely because we could just watch them without trying to focus lenses etc.

Anyway the next day I went up the quarry this time armed with binoculars, a proper camera as well as my phone camera, and my lunch......

When I arrived it was warm but the sun had gone behind a cloud and nothing much was moving.  So I sat on a rock and munched lunch.  And then the sun came out from behind a cloud and whoosh they were up again!!  I don't have a whizzo camera so the zoom isn't that good. Plus they would fly over the further part of the quarry out of the way!  But patience (which I don't have in abundance) paid off and eventually by just sitting quietly on the rocks, they started coming around about me.

So, anyone who has watched wildlife films knows that basically everything you film is either eating, sleeping or... mating.  The ones I was watching seemed to be doing most of the latter, though there was also some feeding on small insects on the water going on too.

So here are some rather blurry photos to begin with..... Yup that's right - they look like they are forming a love heart!  Ha!  Cool! 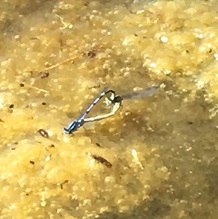 These next photos show the male and female in tandem...... 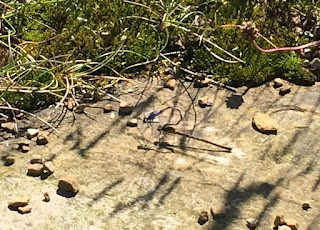 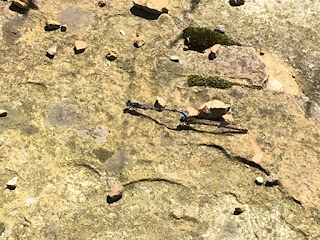 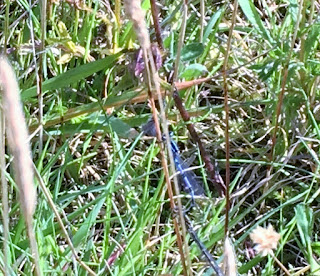 Now the really exciting thing is that I sent a bunch of photos to G. and said oh look more blue tailed damsels.  Well I said I was a novice..... these are NOT blue-tailed damsels at all but Common Blue damsels as he quickly messaged me back.  Which is a new biodiversity record for Graemsay.  Yay!!

And here are two sharper photos of said damsel - a male I think.....  Isn't he gorgeous??  Such vivid colours on the segments. 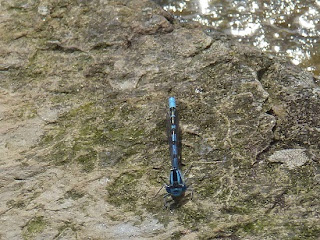 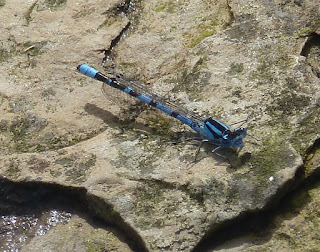 And they eat midges...... of which there are billions on Graemsay at the moment.  I want my personal air force of damsels!
Posted by Sian at 11:00