My house used to be part of one of the larger farms on the island.  It included the steading (the old outbuildings near the house) and many acres of land. The house was purchased (together with walled garden and the field leading down to the shore) from the current farmer. He keeps cattle and sheep on the land and cuts it for silage.  Recently he called round on a bright sunny day and asked if I wanted to take a run up the field to get some photos.  "Take a run" - well even a walk would be a challenge for me as my lungs don't like braes (hills), even little ones!  However a bit of "off roading" was discussed and we set off up the fields in my wee car.  As it has been dry for weeks there was no danger of me getting stuck in any boggy bits!  The view was, indeed, magnificent.  So here are some of the photos from that day.  Probably best to click on the images to see larger versions.... It's not easy doing panoramas for blogger.

The above photo zoomed in a bit!

This photo shows the curve of Sandside Bay, looking over towards the West Mainland.

Looking West - the green building in the centre is our Community Hall.

A closer view of the Community Hall, to the right, nestled in a small valley is the old croft of Quoys which has a burn beside it, and a pier on the shore.

Ah, if only these walls could speak the stories they would tell.

A croft on top of the brae with the hills of the neighbouring island of Hoy behind. 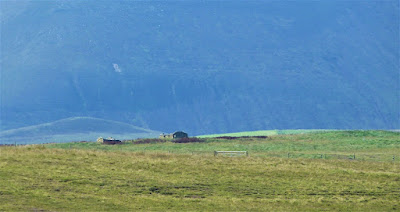 And looking East, this former croft house clinging to the edge of the hill, with Hoy in the background across the water. The old croft of Moan. This wee house is just about the main island pier. 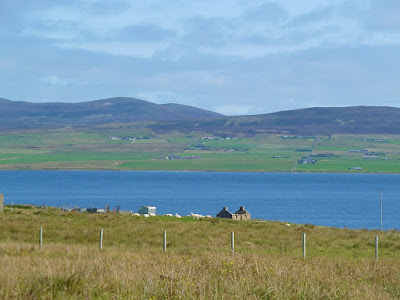 This old croft has a traditional turf roof.  Across the water are the hills of Orphir, on the Orkney Mainland. 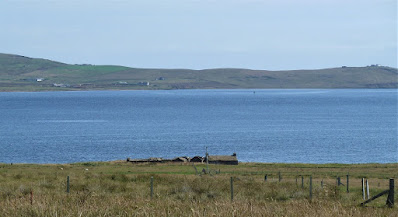 The croft of Crookshouse (or Ke'uks as it is known on the island). The islands in the distance are CAva and Flotta.

At the top of the brae is Breckan, and to the right the farm of Fillets. 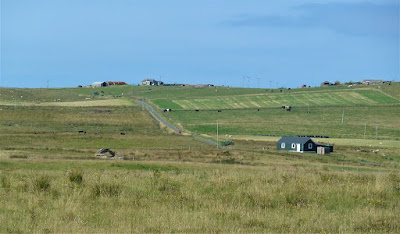 Some more ruins, plus Western Horn.  The cattle are Aberdeen Angus, a small breed of beef cattle popular in Orkney.

Cutting the silage.  Across the water is Orphir and the Hall of Clestrain 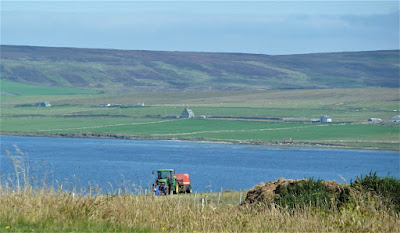 I mentioned the croft of Quoys previously, and above it is Garson 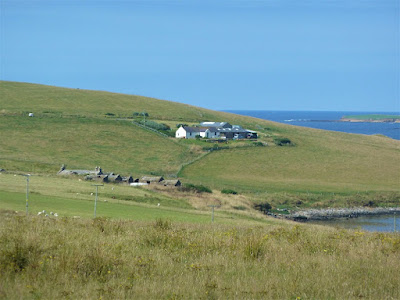 The former school - just one room with a cloakroom off, and the old block of outside toilets! Behind is is the Schoolhouse where the teacher would have lived. 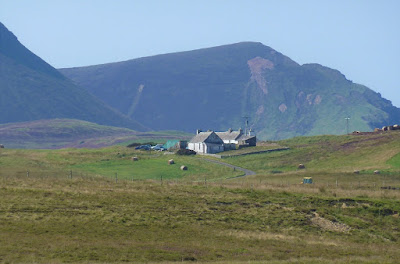 The bright green grass is new growth after hay was cut.  The wee house with two chimneys on the brow of the hill is the Cott of School.  And over behind it is known as the Kame Of Hoy - part of the Hoy hills.

And here we are at Hoy High lighthouse again.  These fields are all part of the farm of Sandside. 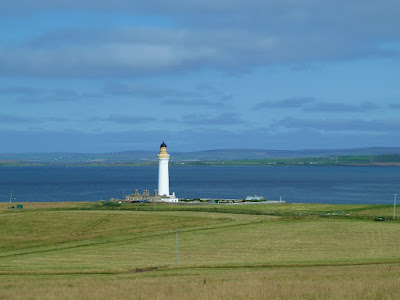 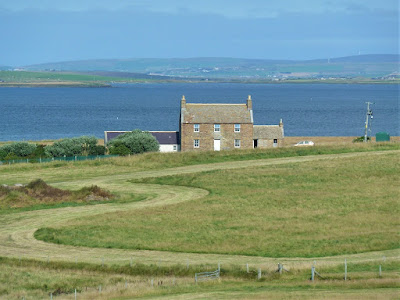