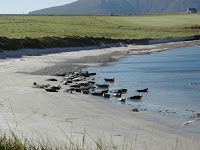 There was an article in The Independent yesterday which suggested that the decline of common seals (also known as harbour seals) around Orkney and Shetland might be due to Orcas (commonly known as “killer whales”). Apparently numbers have dropped by 40 per cent in the Northern Isles in recent years. One theory from a researcher based in Aberdeen is that Orcas (actually part of the dolphin family and not true whales) predate on common seal pups which are born in June and July. Seemingly there is a connection between the common seal pupping season and peak Orca sightings. According to the researcher the Orcas may have moved into the area following movements of fish shoals such as mackerel and found seals aplenty and are also feeding on them.

In Orkney there is also a large population of grey seals and their numbers don’t seem to be affected, possibly (it is theorised) as they pup later in September when Orcas have left our waters.

We get quite a few grey seals hauling out onto Sandside Beach, usually about May each year, and the rest of the time they can be seen along the shoreline rocks and skerries off Graemsay. I just love watching the seals on the beach – you have to stay well out of sight else they all plunge back into the sea. But as long as you remain unseen and heard you can watch them for ages. Sometimes they play about on the edge of the shore, other times they fight, and they cough and splutter like a load of old men at times! My neighbours have even watched a seal giving birth to a pup in the summer.

One of the reasons I fell in love with the house was the sight of the seals from it. I know they are regarded as pests by fishermen etc but I just love them! In the summer you often hear them calling, the sound is quite ethereal especially at night. There are lots of Orkney legends about “selkies” – the seal folk, who leave their skins on the shore and take human form for a time.

I don’t know about the legends but the seals give me hours of fun watching them. If you walk along the shore in the summer you will see a number of black heads bobbing about and they will follow your progress up and down the shore, sometimes coming in quite close to the shore line as they are just *so* inquisitive.

You know when a pod of Orcas are around though as the seals rapidly head for the shore and up onto the rocks. Though apparently Orcas are known to launch themselves onto the rocks after the poor seals.

I just missed seeing a pod of Orcas a couple of years back, but I did hear them blowing air through the blow holes on the top of their heads. Below is a photo I found on the web taken by someone called “Helen” - the photo is of Orcas just off Graemsay! 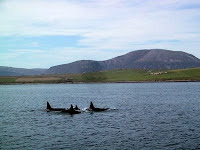