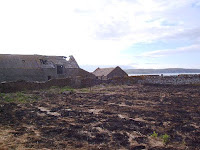 Here’s a photo of the garden after it was recently burned (deliberately I hasten to add!). It may need setting fire to again but it’s now hoped that the burned bits can be cleared to reveal what’s underneath. There are likely to be some stones used as paths or edging of borders. These now need to be lifted and hopefully in the autumn or spring the ground can be turned and replanted with grass seed and maybe begin some borders too.

For the time being I have to content myself with growing flowers in plant pots, along with the wild flowers and daisies that grow around the house! 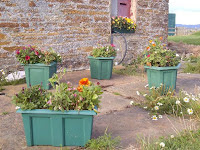 I’m still not allowing myself to go out and work in the garden after my recent neck and shoulder problems. It’s really frustrating especially as the weather has been glorious this weekend.

At least Mick has very kindly been up to mow the grass around the house so things look reasonably tidy (as long as I avoid looking at the weeds…..).

The farmers have been out this weekend making the most of the good weather, cutting grass for hay and silage. While sitting meditating at the beach yesterday I heard a great hullabaloo coming from Windbreck on top of the hill. It sounded like the rodeo had some to town with car horns tooting, lots of whooping, and sheep baaaaaing. Then I heard Sandra’s voice – which gladdened my heart as it meant she was yelling at Mick to chase the sheep. He still hasn’t worked out that for every insult he throws at the “ladies of Graemsay”, Sandra makes him run twice round the field after the sheep. We’ll not tell him though, eh?