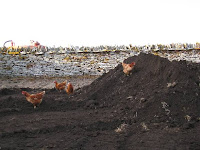 ..... an acronym for Hens Enviornmental Adventure Playground......? Um... this wasn't *quite* how I had imagined my garden to look........! However, while clearing rubbish from the garden (not me - a JCB digger) we (I use the term loosely) discovered an old culvert running under the path in the garden. It's hard to say what it's purpose was - though it is stone lined at the bottom as well as sides and top which, apparently, means it was designed to carry water, rather than just being a drain or soakaway.

One explanation is that it is connected with the Mill dam opposite the house. Originally, probably about 1860s when the house was 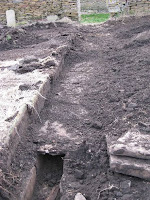 first built, or maybe pre-dating that, the barn had a water-wheel attached to it. There's not a lot of water, in terms of rivers, streams or reservoirs on the island, but again it's thought the water was collected at the top of the hill (from burn, rain etc), then when there was a sufficient supply a sluice gate was opened and it poured down the hill to the mill dam - you can just make out the perimeter of the mill dam in this photo - a green ridge around where the sheep are grazing. Then the water would be released from the mill-dam along the dyke (stone wall) and over or under the water wheel, which would have then turned the threshing machine in the barn. 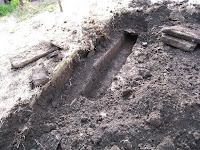 The direction of the culvert doesn't seem to really fit into the scheme of things, but it must do somehow. Another theory is it was put in to take water from the mill dam to the byres for livestock. Anyway whatever the real reason, the culvert had collapsed in several places and was choked with earth so it hasn't been functional for many a year.

The jury is still out on what the next course of action will be. After heavy overnight rain anyway it is too slippery to do any more work in the garden itself. But at least progress is being made in clearing the garden!

Picture of Sandside in 1910 - you can just about make out the waterwheel attached to the barn, and the milldam is quite clearly seen: