….. is in danger of getting smashed over the head or impaled on the garden fork! The hens just love it when I’m digging in the garden. However they have got so bold that I now have to watch I don’t get concussed hens (how would one know?) or worse – ready for spit roasting…… They arrive in a battalion (can you have 4 in a battalion?) anyway, the first to attack are the two boldest and they dive for the worms as I plunge the fork into the soft earth. Scrabbling to get at the worms before I can even turn the earth over and trying to break up the earth by banging with the fork is a little hair raising – or feather raising. Then when the first two have had their fill they retreat and the next wave (of two….) move forward for the attack, then when they are full, the first wave is hungry again! I’m now trying to anticipate the attack and dig a “dummy” piece of ground for them to rootle in so I can then move onto the border unimpeded by feathered friends. That’s when Button usually decides to wander across and inspect progress, at which point the hens realise they have been duped and run clucking to where the real action is. 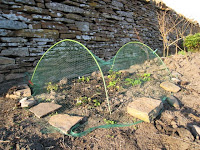 On another front I am preparing the defences for the vegetable patch. I was actually quite impressed that my “Heath Robinson” contraptions for keeping the hens off seed beds actually stood up to a Force 8 gale last week! The Strawberry patch is nicely protected, and the netting can be raised to let bees etc enter and buzz around, while still allowing the fruit (I am ever hopeful) to be protected from birds of all varieties. 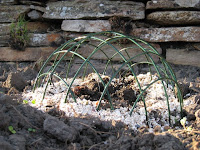 little on the risky side as the house is so exposed to winds from all directions. However, there is method in my madness – sometimes, and I have been using the upturned hanging basket containers to protect newly grown seeds. The white stuff is shell sand and grit to protect from slugs (as I said before – I am ever hopeful).

So the Veg border is more or less complete, I’ve dug the length of the wall and the border is now approx 100 feet x 5 ft – I know it’s about five feet as I measured it by lying down and it was a little wider than I am tall. Yes I know I should have gone and got a measuring tape but that meant clumping back to the house, taking off boots and rummaging. Lying down served two purposes, a) I got a rest and b) I measured the border. Anyway, back to the veg border - I still have peas to plant – I was delighted to hear that they may grow well outdoors. I’ve grown them in the back of a car before and they did well. And no that’s not as strange as it sounds – not in Orkney anyway. On the isles, when cars no longer work they are pressed into service to store feed, implements, or in my case to house a few grow bags. The car was an old estate and provided a nice crop of tomatoes, peas, beans and lettuce one summer several years ago before it was shipped off for scrap.

The fleece is protecting the carrots – from hens, cold, wind and (ever hopeful – did I mention I was ever hopeful?) carrot fly. The onions have started sprouting too. I have absolutely no idea if the potatoes are, never having grown them before. *Something* is growing but I suspect its weeds for now – I shall wait till things grow a bit more!

Now I want to start on the next border, but there is quite a bit of stone to be cleared so I shall need some help with that first.