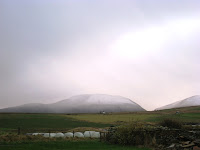 ...... looks like this. Graemsay is only 65 feet at it's highest point so no snow on the island. But the Hoy hills have a light dusting - the sleeping dinosaur looks like s/he has dandruff? In the picture below you can just see our Community Hall - it looks like it is in the middle of a field but there *is* a single track road running past it. And the small building between the hills is the former school - just one room with a lean-to porch, where a couple of the folk living on the island went to primary school. It's been closed for many years now and the kids go across on the boat to schools in Stromness. 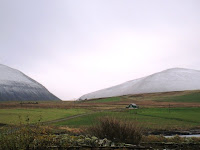 I was surprised to wake up to snow showers this morning - we don't get much snow in Orkney because of the Gulf stream or is it the jet stream? Can never remember which. Anyway our climate is usually mild all year, with some snow for maybe a week or two in the year, but nothing compared to Aviemore in the Highlands of Scotland, which is a winter ski resort!

I have lots of provisions in the cupboard and freezers so I don't need to venture far. I haven't been off the island for a couple of weeks as I was laid low with a virus, and now I am trying to catch up on work. I'm hoping to "escape" for a day this coming week. However on Friday I ordered my "messages" (Scottish word for shopping) - no internet grocery shopping in Orkney, but lift the telephone and the local shops in Stromness will deliver to the boat.

I phoned Fletts, the Stromness butcher, for some supplies - D, who answered the phone recognised my voice immediately, even though I only order a couple of times a month. OK so I sound like Mini-Mouse, but still I was impressed. The Stromness butcher shop is unusual as it also supplies fruit and vegetables. Obviously being a small family run business the prices can't always compete with Lidl or Tesco in Kirkwall, but I like supporting local businesses and their produce is always excellent quality. Plus *they* deliver to the boat (unlike the large supermarkets). So I asked D what fruit he had in the shop - I was fearing scurvy as I'd run out of supplies of fruit ;-)

He reeled off such a list it was hard to choose. OK - in terms of food miles it probably wasn't A Good Thing, but the majority of our food is shipped across the Pentland Firth from Scotland anyway, apart from some seasonal local produce. And I needed my Vitamin C..... so I could choose from the usual grapes, oranges, bananas etc, but also exotic things like Sharon Fruit, pomegranites, figs, dates, mangos....... and I didn't even ask about the veg (root ginger was in evidence last time I passed the shop) and this shop is *tiny* - five customers and you are lining up in the street! Anyway, scurvy is averted with a fresh supply of excellent quality fruit! I also felt obliged to order some meat too (seems odd phoning a butcher just for fruit!). But I passed on the sausages that are one of the specialities, already having some in my freezer.

And then I phoned the baker and again the lady recognised my voice (though I do order a couple of times a week from them). But again excellent service - not everything I wanted was in stock but helpful suggestions for alternatives and mentions of special offers helped. So along with the usual supply of milk and cat food I had some very tasty Westray fish (from one of the more Northerly Orkney islands). I have to say it was delicious - none of the tasteless pre-packed stuff you so often get in supermarkets these days. In fact Button was keen to swap Whiksas for Westray Fish..... no deal......... though I did share.......
Posted by Sian at 11:40