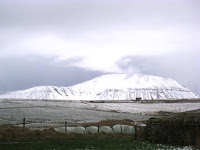 ...... the snow isn't really settling so it's just ice and slush underfoot and not at all pretty.... but that probably doesn't quite fit the tune....... As you can see - the sleeping dragon of the Hoy Hills is under the duvet - don't blame him/her.

Anyway - we have some snow but as described above it's more of a nuisance than the picture postcard effect. Still - today is the shortest day - YES!!!! Mid-winter!!!! Whooo Hooo!!! So today the sun rose at 0905 and sunset is at 1515........ I don't think there will be much of a sunset due to clouds, sleety showers etc, but still it's good to mark the winter solstice.

We've had poor weather since Saturday and it's expected to last during the week. Nothing as bad as some folk are having in the UK or indeed across on the East Coast of the US. Fortunately I have plenty of fuel so the house is nice and warm (as long as the power stays on!) and there is plenty of food in the freezer.

Though Graemsay is suffering not just from the weather but almost half the population are down with the Winter Vomiting Virus (norovirus). Not pleasant. I am in self-imposed isolation at the moment having managed (so far) to escape it's clutches. But the children's Christmas Party was cancelled at the weekend as most of the kids were ill. However Santa is apparently hoping to make a brief appearance on Christmas eve after the carol service so the children won't be entirely disappointed.

Last week the weather was glorious - so in the absence of any scenic Winter Solstice photos today here are some from a few days ago: 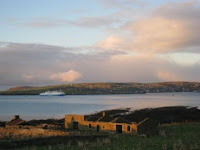 Reflecting sun on an approaching snowstorm:

Loooong shadows in the mid-winter 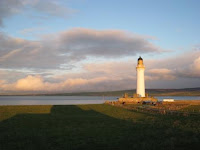