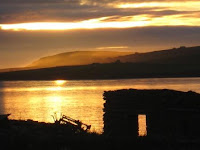 Well not really white nights, but not very dark ones! I'm becoming obsessed with the lateness of sunsets and how light it remains as we near the summer solstice. The photo above was taken just before sunset on, and the photo below was taken at 1140 on the same evening. I was going to wait until midnight but I had to get up early the next morning and I was pushing it as it was! A Scottish Weather Forecast shown at the end of the Scottish news programme has been showing photos taken by folk around the country to show how light/dark it is throughout the country at mid-summer. Well Irene of Breckan sent in a photo which was broadcast this week thereby furthering our campaign to get Graemsay recognised globally! Well OK within Scotland is a start ;-) 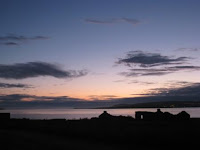 Email ThisBlogThis!Share to TwitterShare to FacebookShare to Pinterest
Labels: sunsets