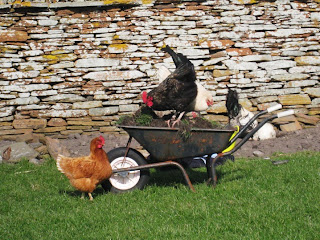 It's mid March and I've been digging the garden in a tee shirt (well I used a fork too and was wearing trousers....). BUT I didn't need my hat, scarf or trusty waterproof to keep out wind and rain!  It was joyous!!  As you can see above - the chickens were on hand to supervise again....

It's been a lovely few days, though we did have some fog yesterday.  Friday Mrs Orkney Flowers came out and did some work in the garden, including digging part of my border while I just hovered about being unproductive. Today I made up for it by digging over the veggie-patch and tidying up the edge of it with Mrs Flowers trusty edger thingy.  To get a straight line I   measured from the wall and used pegs and string.....sigh..... unfortunately I spent most of the time untangling chicken feet from said string..... 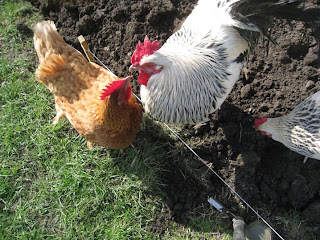 Anyway with the help of the chickens the straight edge isn't perhaps as straight as it might have been!! 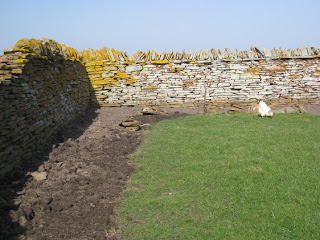 But poor Mrs Flowers beautiful straight-edge soon got ruined by the chooks!! 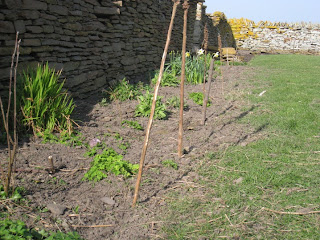 And of course the chooks have been enjoying a dust bath today... and yes I have to engineer all sorts of contraptions to keep them off my seeds and veggies! 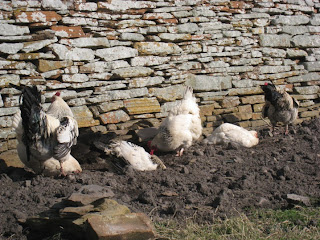 We had discussed ways of keeping the chooks out of the garden this summer.  But - er - I think I might have to revise those plans as clearly not even a 5ft wall will keep SOME of them out! 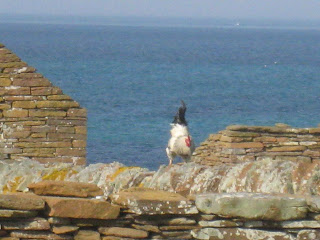 Maybe a guard cat would help?

But while I was happily pottering in the garden, farmers on the island were busy with lambing, calving, ploughing and muck spreading. The new season has begun (it was the start of "British Summer Time" today) and lots of work to be done.

For the farming community there is also concern at the moment as the local abattoir, Orkney Meat, made a sudden announcement on Thursday that it has ceased trading. The local council, Orkney Islands Council, and our member of the Scottish parliament, along with shareholders etc are trying to sort out a rescue package as it will be devastating for the local farming community. Without an abattoir in Orkney all livestock would have to be shipped across the Pentland Firth to Mainland Scotland. Not good for animal welfare or costs to producers. Our local butchers buy their produce from the local livestock mart and it is processed by Orkney Meat, so an uncertain time for all concerned.  Fingers crossed a solution can be found soon.