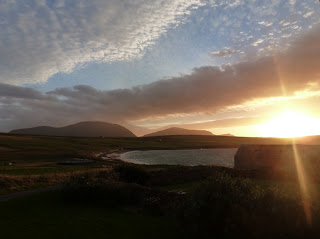 ....rather early and with high winds and lots of rain. Actually there was a bad storm while I was away in Dorset. I feared for the house! Or at least debris flying into windows.  Towards the end of September I start packing away anything in the garden that might fly about, and anything outside (eg garden bench) that might get damaged or cause damage.  However the first storm of Autumn arrived in EARLY September and caught me unawares!  Fortunately the house was fine and all windows remained intact, as did the garden benches.  As you can see above, our reward is a lovely sunset......

However my poor peas and broad beans took a battering.  Fortunately I had harvested a large number of broad beans before my holiday and they are safely in the freezer.  But I didn't get a single pea this year - sob! 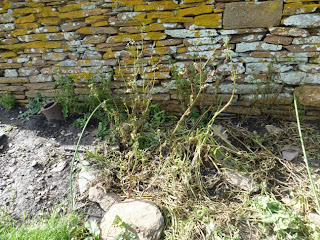 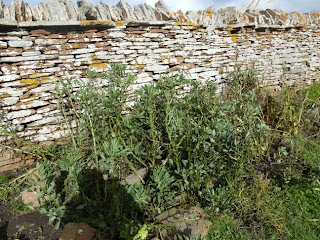 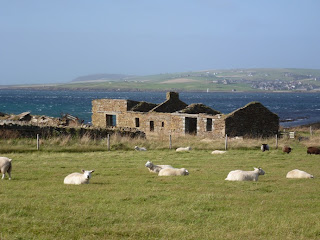 This hen has three "chicks" that are almost as big as her now!  I've managed to control the "hen production" this year and have only 5 chicks.  Not sure how many are hens yet..... 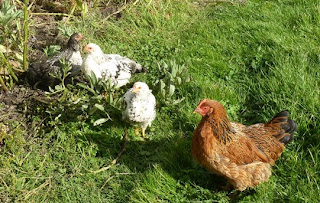 There are lots of berries on the St John's Wort and on the rosa rugosa too. 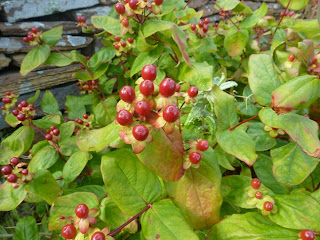 Though it's been a tough time in Orkney (as in the rest of the UK) for farmers and their crops. The hay was very late being gathered on the island this year. 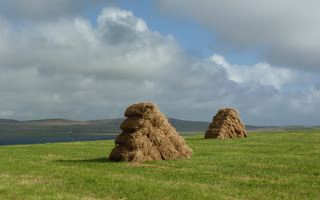 And the weather is very changeable with beautiful still days like the photo at the top of the post, or blustery days with the sea frothing and foaming as it is caught by the wind or crashes onto the shore. 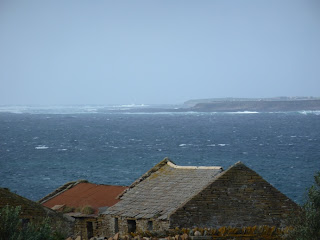 Time to hunker down now that the days are getting shorter and there is a chill in the air. But I must remember to stick my nose out the window at night as there was a fine display of the "Merry Dancers" (Northern Lights) last night while I was sleeping!