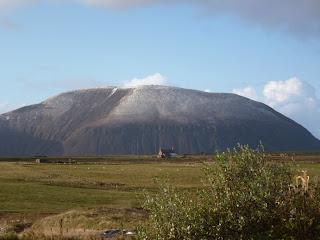 .... in OCTOBER?!!  Brrrr!  After the gloriously warm and sunny weather of the last week, we have had snow/sleet/hail showers for the last few days. Thankfully none of the snow has settled.  But it's been windy.... from the North.... so yes that's COLD!

OK - I realise for those of you who live in climates where snow is not mentioned till it gets to 6 feet deep that this seems like I'm being a bit of a drama queen.... but in Orkney we don't get much snow usually or even much frost....so to get it in October is a bit depressing. It makes winter feel like it's going to be looooong.  Which of course is not necessarily so.

Snow sliding down the window pane.... 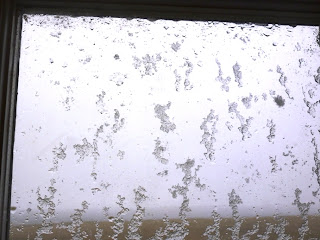 Tonight the clocks go back an hour as it's the end of "British Summer Time"....sobs quietly...... ah well, time to hunker down in the warm with lots of books and chocolate!

A wee bit of a "blizzard" yesterday afternoon hiding the Hoy hills.... but it didn't last for long. 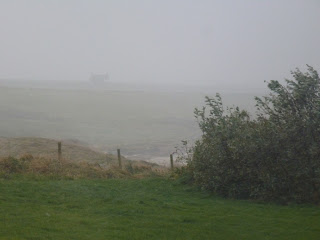