A trip to Glen Coe and Glenfinnan in the Highlands

I mentioned last week that I'd been away for a few days.  I was in Fort William in the Highlands with a friend, Anne, from London.  The weather was cool (cold Anne would say!), but at least it stayed dry most of the time and with very little wind.  Given the West Coast is known for high rain fall I think we did very well weatherwise.  Anyway I'll share some photos of our trip over the next few posts.

We took a tour around Fort William, Lochaber, Glen Coe and Glenfinnan. First stop was Glenfinnan for photos of the iconic stream train crossing the viaduct.  Depending on your point of view it is either "The Jacobite" steam train or the Harry Potter Express!  Either way it is brilliant to watch it go over the amazing Glenfinnan viaduct which was finished in 1901. Hundreds of visitors scramble up nearby hills or around the Glenfinnan centre to catch a glimpse of the steam train going over the viaduct.  We joined in, of course. 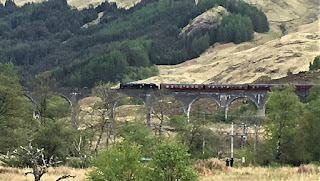 It looks even better with the steam trail! 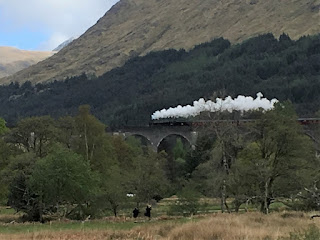 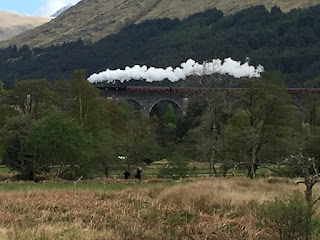 Sorry they are a bit blurred! I was way too excited to take proper pictures..... but there will be more photos of The Jacobite later as we actually went ON the train.  Whoo hoo!!

Anyway, also at Glenfinnan but sadly often ignored in preference of a steam train, is the monument to the Jacobite rising which began in by the shore of Loch Shiel in 1745.  This was when Prince Charles Stuart (Bonnie Prince Charlie) raised his standard on the shores of the Loch claiming his right to the British throne.  Sadly that claim ended at the Battle of Culloden in 1746. Bonnie Prince Charlie fled Scotland and never set foot on its shores again.  The monument was raised in 1815, and in 1835 the statue of an anonymous Highlander was placed on top 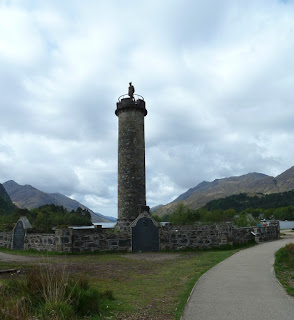 And then we set off for Glen Coe (or Glencoe).... I love mountains and these did not disappoint! 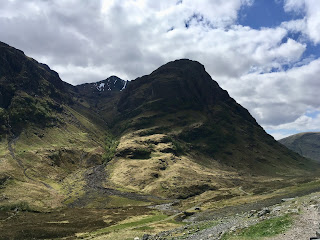 There is a lot of history in Glencoe, one infamous incident was the massacre that took place in Glencoe in 1692 when 28 men of the Clan MacDonald of Glencoe were killed by government forces (the forces included members of Clan Campbell) who were billeted with them. The massacre was on the grounds that they had not been prompt in pledging allegiance to the new monarchs, William II and Mary II.

Leaving aside the history, the landscape is just awesome.  We had a lovely sunny day to drive through the mountains. There was still snow on the hills and in the corries (the name given to "ice-gouged bowls" carved by glaciers during the last ice age). 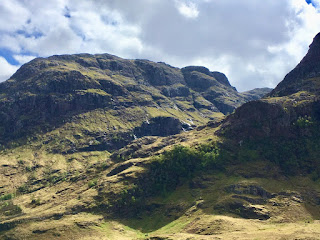 Here are a selection of - er - mountains! 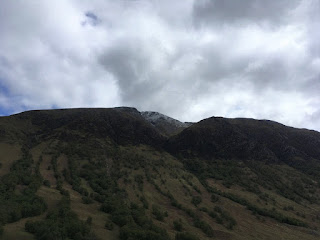 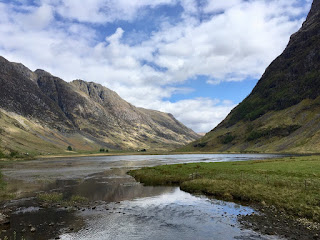 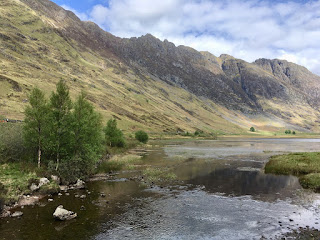 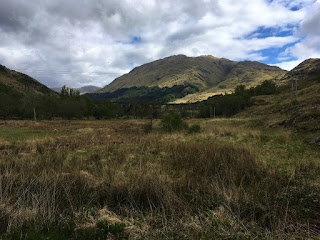 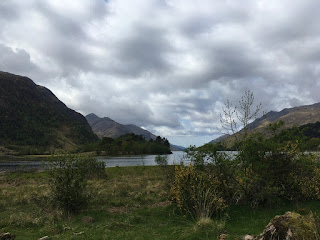 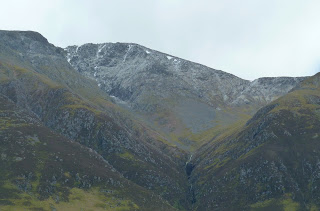 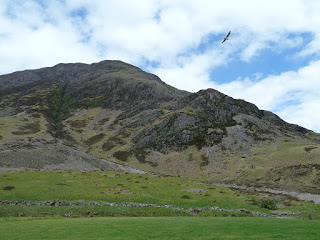 I mentioned snow in the corries... 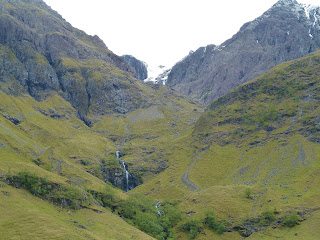 A rather isolated house!  Waterfalls running down from the corrie with melted snow... 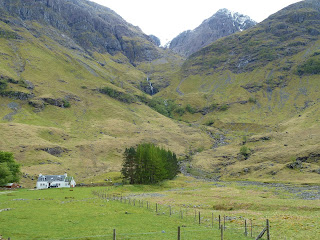 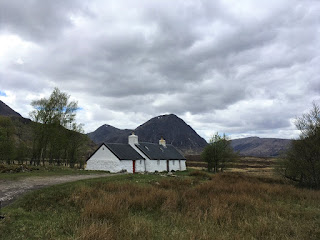 And a photo of a deer, a helicopter and a mountain.  Now although the James Bond movie, Skyfall, was filmed in the area, I don't think 007 was in the vicinity, sadly. 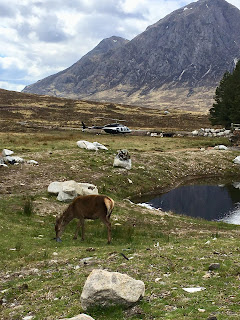 Fort William is the end of the West Highland Way, a very popular hiking trial. There are also lots of tourists around, as well as serious hillwalkers and mountaineers.  It can get very busy in the summer, and don't forget the midges!  So we were very lucky with our trip in May, no midges, no wind, little rain, and not too busy with tourists!  If you are in the Highlands of Scotland I do recommend a trip through Glencoe!