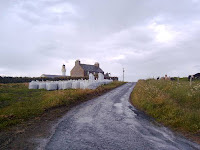 Quick entry today as it’s late (nearly midnight, *way* past my bedtime), but tomorrow the electricity is being turned off all day as the electricity company (Scottish Hydro) are carrying out maintenance work on the island. Need to get everything done today that requires electricity!

And we are also having road resurfacing carried out on the island. Our “main road” is pictured above. As you can see it’s a single track tarmac road. The white bags on the left of the picture contain all the aggregate that will be used to resurface and there are drums of tar being shipped over the island over the next couple of days.

On Saturday the “Hoy Head” will be delivering the main machinery, which is too heavy to be lifted by our own ferry. Then next week the resurfacing will begin in earnest.

This week the road-men have been cleaning the road, removing all the vegetation which usually grows in the middle of the road! And also filling in any pot-holes etc.

There is probably only a couple of miles of public tarmac road on the island. The rest is made up of private tracks. As we don’t have a “car” ferry there isn’t that much traffic on the road – which is just as well as it’s only single track and with no official passing places! Generally it’s a good idea to check the clock before setting off in a particular direction – you don’t want to be going the wrong way when it’s boat time else you could end up reversing if you are going against the traffic!

When I first moved to the island I had an estate car which was quite long, and the wing mirrors were broken. I can only reverse using mirrors - being so short if I turn round in the driving seat my feet don't touch the pedals any more! The farmers learned it was quicker to reverse their tractors and trailers than wait for me to reverse! However with my nifty little red bug of a car it's much easier....