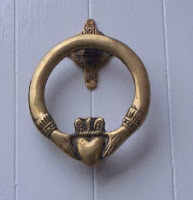 Recently I had a door knocker fixed to the back porch door (see photo). Usually my visitors come round the back of the house partly because that’s where folk can park their cars (island visitors only as off-island visitors can only access Graemsay as foot-passengers). The back door is also more practical than the front door which leads directly into the hall and onto the carpet. The back porch is a useful area to leave muddy boots and dripping clothes etc!

Anyway during the summer months with the windows open, when I’m working upstairs in my study I hear folk crunching on the gravel pathway so get advance warning. However in the winter I fail to hear their “chapping” on the door. Most folk know to open the door and bellow, but not all will do this. So I either end up running up and down stairs thinking I’ve heard the door, or finding I have to run after folk because I didn’t catch them in time. Hence the door knocker.

There isn’t a problem with the front door because sound echoes through the downstairs hall and upstairs landing so I hear that wherever I am in the house – well usually. So any folk coming to the front door will still have to “chap” (knock).

The door knocker was a gift from some US friends after they visited Sandside when the house was still being renovated. I think they doubted I would ever have a door to hang it on given the state of the house when they visited...... It only took me about six years to get the door knocker fixed to a door! Anyway I’m very pleased with it. The design is based on the traditional Irish Claddagh ring which is given in friendship: the two hands clasping represent friendship, heart represents love, and the crown represents loyalty. I’m really pleased with it – however I am now fearing it might rattle in the gales in winter. If so I can detach the knocker bit if it gets on my nerves, though that will leave a Celtic cross which folk might think odd – but at least that will keep the Vampires away!

Of course the other problem is, if I’m working upstairs on the phone via teleconference etc I usually have to ignore knocks on the door – though I generally put a notice on the inside door that I’m busy working on the phone. A loud hammering on the door will take a bit more ignoring!