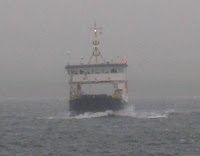 As I've mentioned before, our regular ferry is away having work done to it and not due to return till the end of the year. In the meantime we have the "Golden Mariana" for passenger traffic, and another vessel, the "Hoy Head" to deliver large cargo every couple of weeks.

As the weather has been poor the last couple of days (with our passenger ferry cancelled on several occasions), we weren't sure whether the cargo would be delivered today. But sure enough out of the mist and spray appeared the "Hoy Head" bearing goods for the island. 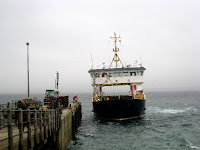 First to be unloaded was a shiny new tractor 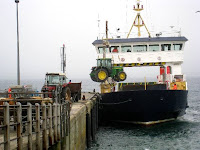 Then a neighbour's car 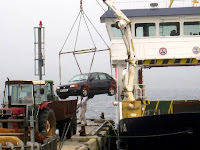 Followed by my heating oil 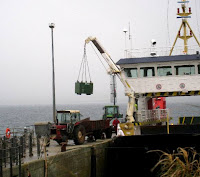 This big chap (the one on the right) 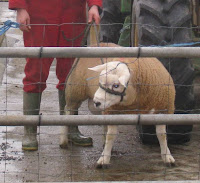 And to be transported from Graemsay to Kirkwall mart were some cattle - winched onto the deck of the vessel singly in this box. 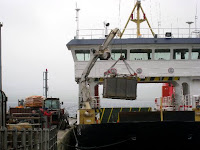 And just as the events were drawing to a close on the pier, the "Golden Marianna" arrived with groceries from the town. Including a large box for me - the weather does not look good over the coming week so I'm stocking up on essentials - like cat food and milk!