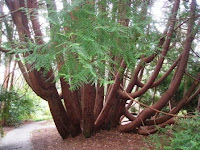 Ullapool was very green with lots of *big* trees. These are photos from Leckmelm Gardens & Arboretum which is just outside the town. The 12-acre walled garden was originally planted in the 1870s. They fell into neglect from the mid-1940s until 1985 when they were restored. The guide books says that although the gardens are north of Moscow, due to the waters of Loch Broom being warmed by the Gulf Stream, lots of exotic trees and shrubs flourish in the microclimate. 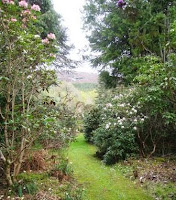 The garden was full of rhodedendruns, azaleas, and camelias as well as stunning trees. I hugged a giant sequoia (Redwood) and my favourite tree was the cedar at the top of this post.


One sad tree - the name of which I forget, had been blown over in a winter gale and had been cut back, though the wood was being re-used for benches, seats and other things. But it was sad to see such a great tree felled. There had been lots of snow damage to trees too, but work was being done to encourage new growth. 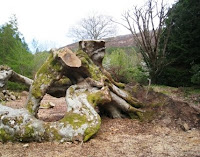 There were peedie lambs in the field next to the gardens. This one was enjoying the sunshine. Lambing in Ullapool must be late, like that of Orkney. 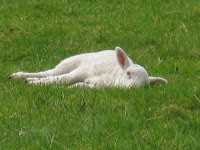 Email ThisBlogThis!Share to TwitterShare to FacebookShare to Pinterest
Labels: Ullapool