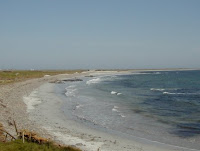 One of the North Ronaldsay beaches

I thought I'd tell you about another of the Orkney islands, another "small island" - the island of North Ronaldsay is the northern most of the Orkney islands and is seriously remote! It's only about 2.7 square miles and it's only connection to the Orkney Mainland is via cargo ship once a week, or via a regular small plane service.

Pat, one of my regular blog readers mentioned watching a short film "Life on a Small Island" which is about North Ronaldsay, so I thought I'd share it with you all. Click here for the film

It's about 18 minutes long and is narrated by a young North Ronaldsay lass. It was filmed in 2008, and since that time the school has closed and then re-opened again! The wee boys at the school in the film have grown now and gone to the school in Kirkwall (where most children from the isles go from the age of 14 to finish their studies, along with children from the town of Kirkwall and surrounding parishes). However the island community managed to get two "gateway" houses built and advertised for two families to come and live on the island. So the school could reopen again - much to the delight of the community. Once a school closes it can be the end of many rural communities as young families are not keen to move there.

But a "claim to fame" of the island is the Seaweed eating sheep, the famous North Ronaldsay sheep. Those in the UK may have seen North Ronaldsay on the BBC Countryfile programme recently. These sheep really do live on seaweed! Most of the year they are out on the shore, getting shelter from the dry stone dyke that runs around the island and keeps them out on the beach. The seaweed gives their meat a special flavour and several restaurants in London serve this as a speciality.  The fleeces are also sold, and the wool processed and sold on. The island has it's own website so do take a look here at more info and photos.

Here are some of the North Ronaldsay sheep on the beach! 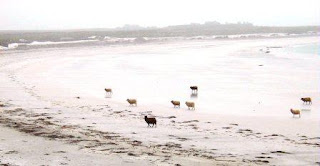