A belated Happy New Year to you!  I've not been in the mood for blogging since the New Year.  We have had unremitting gales and rain.  No floods like many people in Scotland and the North of England, so I'm thankful for that.  But low grey skies, rain, wind, more rain, more wind.  On Sunday the wind was from the North East and about 70mph with gusts greater than that.  Thankfully we at Sandside are all OK.  And there doesn't seem to have been much damage on the island either. Unlike other isles in Orkney that had ferries and piers damaged!

Anyway today we had "acres of calm".  Ohh the sky stretched high and far, the water was mirror calm.  I could hear BIRDS calling.  The lovely warbling call of curlew, gulls, lapwings and even a sparrow twittering in the garden with a wren scolding it nearby.

It's almost the first time since New Year I've been out of the house except to feed hens, or go on a quick visit to town to do some shopping.  It's been hard to stand in the wind, and getting in and out of a car is a challenge if you want to keep all your doors intact!

Today was pure joy.  Button had made the most of the start of the calm yesterday and had been out hunting.  "Evidence" of mouse hunts littered the porch (sorry were you eating?!).  And today she was delighted that we could resume our walks to the beach.  So here are some photos of "acres of calm".....  I hope you enjoy the views as much as I did!

These few were taken earlier in the day, about 9am, not long after sunrise. 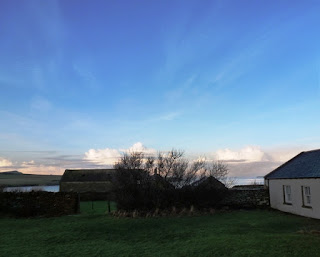 The sun is just kissing the head of the dragon of Hoy. 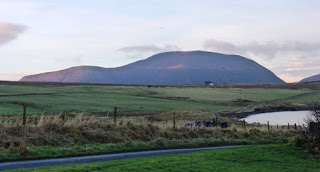 Then just after lunch time for a proper wander....

Looking over towards the Orphir hills 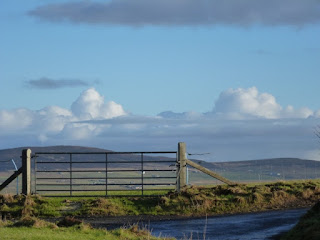 Towards Stromness.  Not even the approaching cloud bank could put us off! 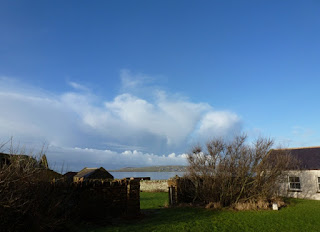 We were going for our first proper New Year Walk on the 12th January. Geezsh! 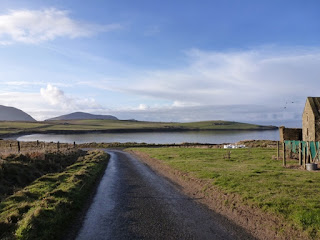 Button stepping out too of course. 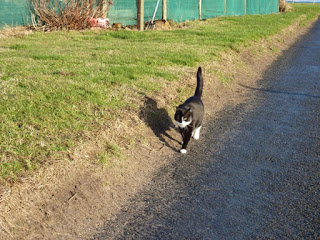 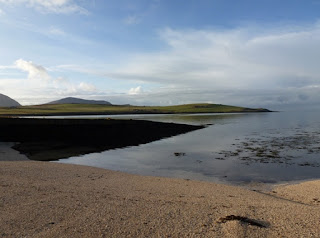 I could skate across the mirror to Stromness maybe? 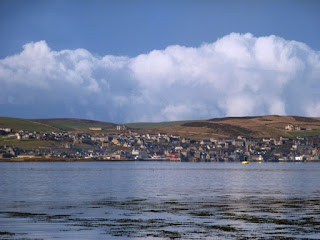 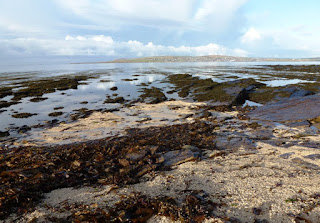 Er - and lots of seaweed.  The smell was a little pungent on the shore.  Tons of seaweed thrown up during the gales. 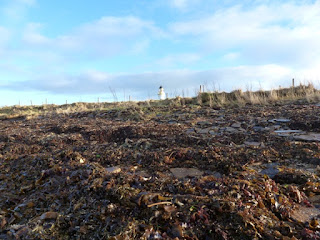 Did I mention space?  And Button? 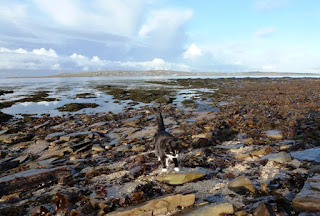 This old house is teetering on the brink!  Each winter it gets a little nearer.... 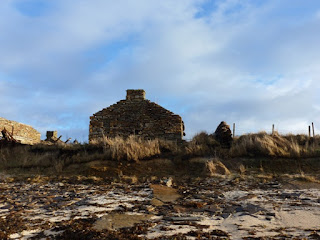 And there goes our wee ferry, the MV Graemsay, heading back to Stromness. 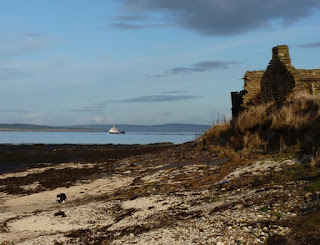 These old buildings are slowly crumbling.  This is the old sail shed at Sandside. 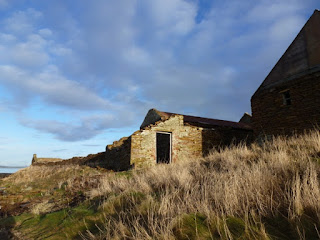 I scrambled down onto the sandy beach too.  Button was slower than me, she kept stopping for lots of lovely sniffs. Goodness knows of what, all I could smell was seaweed!  Can you spot her?? 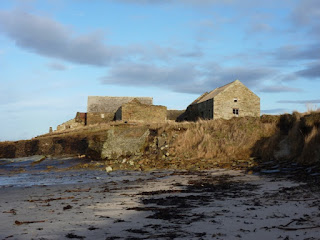 The girls were delighted to have some sun on their feathers!  They'd been able to get out in the shelter of the buildings near their henny house, but it was miserable in the wind and rain so had spent much of the time hunkering down indoors over the last 10 days. 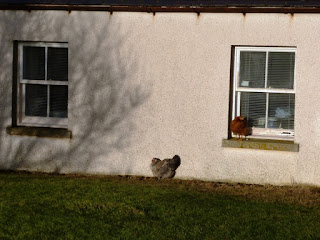 Today was also momentous because I cleaned my kitchen windows!  Not a very frequent occurrence! But the kitchen windows looked like this.... and they are NOT frosted glass! It was impossible to see what the neighbours were doing.  hee hee! 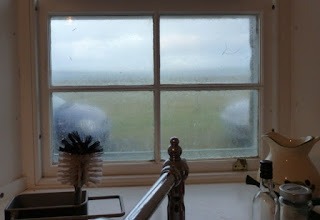 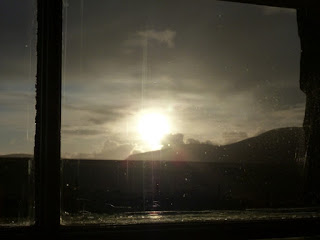 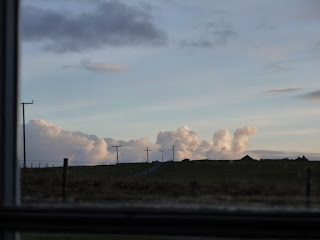 And what did we do during the stormy days?  Well *I* was working much of it.  Did some baking.... But I also had fun with a Christmas jigsaw..... and Button..... as you can see - she hibernated! 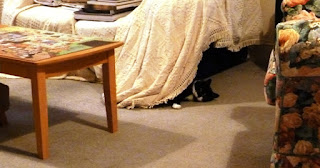 The forecast is for some calmer weather, though we may have SNOW before the weekend.  Actually, that would make a lovely change...for a while!