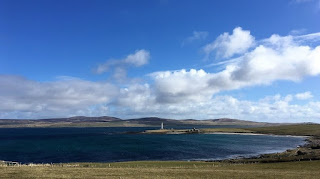 ....was Easter weekend.  I don't celebrate the religious significance but always think of it as a Spring festival.  So there were chocolate Easter eggs, and of course flowers.  I always try to have some daffodils in the house at Easter as that was Mum & Dad's wedding anniversary.  Neither could ever remember the date but as they got married on Easter Saturday that was always they day they celebrated their anniversary!  So in their memory I have daffs in a vase. 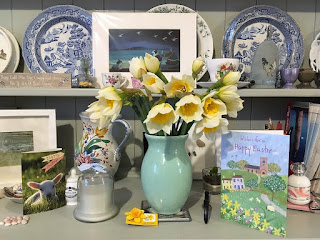 Spring is late throughout the UK and we are all longing for warm sunny days.  But the sun did shine last week and it was nice to be out and about.

There are lambs appearing in the fields too now.

The ewes and lambs are numbered so if they get separated the farmer knows who belongs to which! 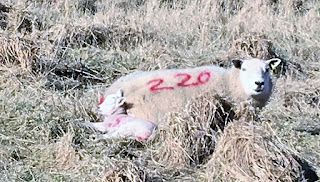 This ewe had escaped and was wandering round.  She was trying to look fierce and prevent me getting in my car - she failed. Haha!  How can a sheep with a white top knot be taken seriously? 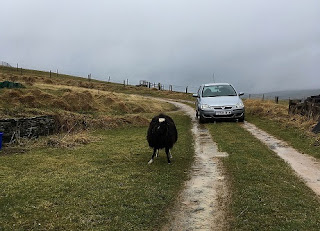 And.... we had SNOW at Easter!!!  Mostly just settling on the Hoy Hills.

Not that that stopped Madam Button from basking in the sunshine! 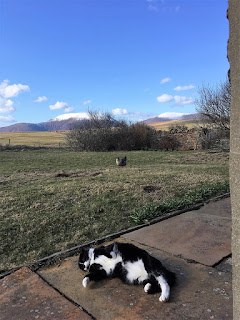 Fulmar pairs are back on the cliffs at the pier.  They are fantastic in the air, really acrobatic! 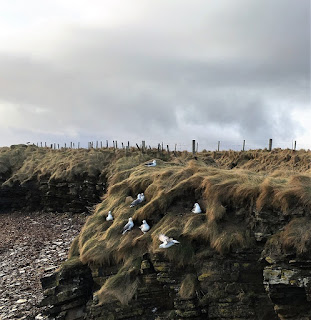 No Easter chicks, but Gimpy (Limpy) hen has been separated from the flock and put in a pen on hard ground.  She had an infected foot and it wasn't healing up in all the mud.  I put her sister, Wheezy Hen, with her for company.  They are both at least 6 years old and generally doing well.  Neither are thrilled at being confined but they are getting lots of extra treats like fruit and veg.  Hopefully when (if?) the land dries up they can both be released again. 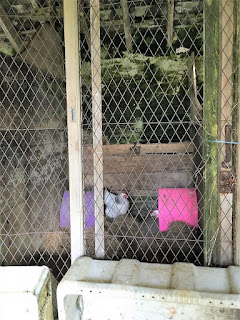 Neighbour Sue helped construct the pen.  It is in the old Stable at Sandside where the working horse would have been kept.  So the sides are high, as is the manger.  A former owner of Sue's house used to keep pigeons and she had some frames from the coop in a shed which came in VERY handy as the doors!  Lots of hay, two nesting boxes and two reasonably comfy hens!

And then there was a beautiful sunset that evening..... 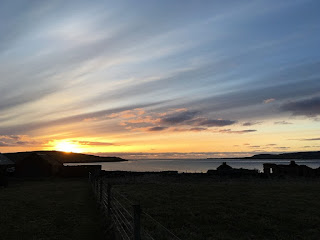