Last weekend the St Magnus Festival was taking place in Orkney. This is an annual “arts” festival, with international musicians, poets, writers and artists performing in various venues around Orkney.

I spent the weekend in Stromness as there were several events I wanted to attend. The town feels really buzzy during the festival as events start in the morning and go on into the evening, with folk strolling around the different venues, stopping to chat or eat Orkney ice cream (I can recommend the orange marmalade flavoured ice-cream!).

Saturday I went to a reading by the poet, Wendy Cope. She read a number of poems from her various collections, many of them humorous but still with depth. Then in the afternoon wandered down the street to the Town Hall (a converted church) and listened to a piano recital by French pianist, Eric Le Sage, who is acclaimed for his interpretations of Schumann. He also played a modern piece by George Crumb (Three Romances) which is quite “Avant Garde” in the beginning and included various twanging and muffling of the actual strings of the piano as well as – um – clonking of the keys (you can tell I’m no musician!). Apparently the piano (a baby Steinway) was hired from a local musician who was in the audience and having kittens at what was being done to her precious piano in the name of “art”! However piano and musician survived to tell the tale.

In the evening we went to a late cabaret show in the “Moulin Rouge Speigaltent” – a venue well adapted to cabaret, with plush velvet booths and a bar. “Oiseau Rouge” had a variety of artists including acrobats and a juggling comedian. Very entertaining!

Sunday morning there was a recital by Andrew Motion (the former UK Poet Laureate) reading from his new collection of autobiographical writing and new poems. And this was followed by the Endellion String Quartet performing with Eric Le Sage and also doing a quirky musical piece with Wendy Cope narrating poems which were portraits of archetypal audience members including “The Cougher”, “The First Date”, and “The Traditionalist”. Clever and good fun.

The weather was lovely and warm and I took a walk along to the South end of Stromness. I have to confess I don’t venture to that part of the town normally, so it was lovely to explore and see some different views. 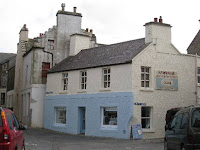 Here are some photos of the South end of the town…… 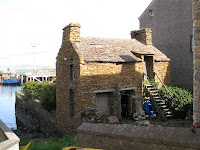 Photo on the left - Graemsay in the distance. 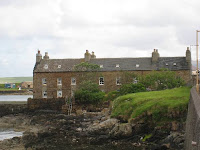 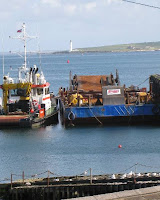 d on the left here is one of the "Stromness Cats" - domestic cats who live in the houses along the street and are seen parading around or dozing on warm car bonnets (hoods). 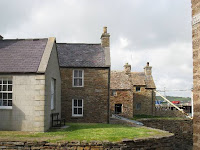 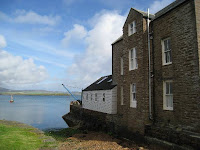