We plough the fields with tractors..... 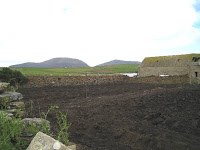 ..... to quote an updated "school" hymn. Well actually the garden was ploughed with a tractor! This may seem a little OTT, however what seemed like a reasonably easy job when first started - eg levelling the garden, turned into a major enterprise when it was discovered various large bits of corrugated metal were buried not far below the surface, as well as hidden edging stones in places where paths were no longer needed.

About 30 years ago (maybe a bit less) the garden was also used as a silage bit for winter feed, so a large whole was dug in one corner and it seems corrugated metal and very large stones were put on top to hold it all in place and it may be that some metal was used to line the bottom too. Anyway, even though most of the garden will be laid to easy care grass, with bits of metal and stone protruding just above the 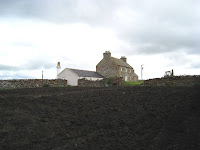 surface, it all had to come up. Then the ground needed to be levelled and eventually it just seemed easier to put the plough through it rather than spend time rotovating it!

It does look great now. It will need harrowing to level off the furrows again, and then probably waiting till next Spring to sow with grass seed as the ground needs time to "settle" and may need a bit of light re-levelling to get a fairly even finish. 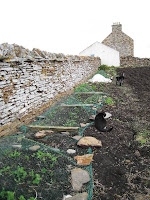 The veggie patch is coming on well too. Pea plants growing like mad, and broad bean plants have appeared this week. Tatties coming up well too so earthing up beginning (of course this is tricky as the hens then try and unearth them - sigh).
Posted by Sian at 09:29