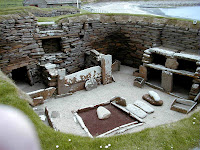 I forget who it was who said "Scratch the surface of Orkney and it bleeds archaeology" but it certainly seems to be true. Orkney, due to remoteness, escaped the worst excesses of the industrial age and the land is largely undisturbed. So not only have wonderful Neolithic sites (neolithic period from about 4000 to 1800BC) such as Skara Brae (photo above) been discovered, but other sites are still being explored and interpreted with several "digs" being conducted in Orkney this summer. 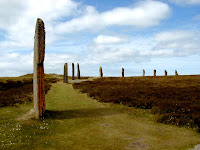 One of these digs has a daily blog written by those working at the site of the Ness of Brodgar, which is quite close to the Ring of Brodgar (a circle of standing stones, photo above). They are finding interesting bits of pottery and linking together the history of this site with others on Orkney. The dig goes on through August and I'm hoping to get along to one of the tours given by the team. I'll post some photos when I do!
Posted by Sian at 11:49