I think most bloggers find that summer is so busy it's hard to find time to blog (though there are a few notable exceptions!!). Last weekend the broadband connection to the island, and other parts of Orkney, failed due to a lightening strike somewhere near Thurso on the Scottish Mainland. However trying to persuade the very nice lady at the BT call centre somewhere in Asia that I knew for a fact it wasn't my own line, modem or whatever but that I lived on a small island off the coast of mainland Scotland and that we had a microwave link, that all my neighbours, whatever their ISP, were experiencing the same problems, took 45 minutes and a lot of patience on my part...... Anyway, eventually Sunday evening the connection was restored.

Then this week I took a trip to Westray, one of the more northerly of the Orkney islands, as a friend had rented a cottage there for the week. I had a jolly nice time and I'll share more of that and some photos later in the week.

I returned to find my garden continuing it's metamorphosis, having been levelled. I'm off to town this week to get the grass seed!! A 5ft border around the edge will be left and the centre will be grassed over. Not very adventurous I know, it's a traditional linear design, but most importantly, will be reasonably low maintenance. As the garden develops I may make incursions into the central grass but for now it's easy steps!

So it went from this:

to this (with the aid of various bits of machinery and a lot of effort by my neighbour, Arthur): 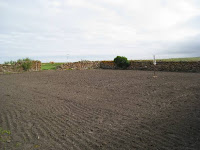 I phoned Shearer's in Kirkwall to ask about collecting some grass seed. The very helpful chap asked what sort I wanted as they did a variety of seed. I replied "The sort that doesn't grow above two inches during the summer"......... Don't think they'll have that kind in stock though...... sigh.......

Oh - and yes I still have the veggie patch. I found a tiny pea pod among the folage yesterday - the first of the peas!! 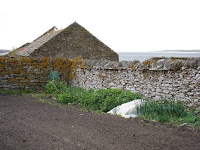