I wrote last year about the excavations underway at the Ness of Brodgar site on the Orkney Mainland. This site is believed to date from the late Neolithic period and is still being uncovered. A couple of weeks ago I had the opportunity to go on one of the tours around the site to see progress since last year.

An aerial view and some discussion of interpreting the site has been made by Dr Colin Richards of the University of Manchester who has excavated several other sites in Orkney and it makes fascinating reading.  The Ness of Brodgar sits between the Ring of Brodgar, the Standing Stones of Stenness, the Barnhouse Settlement, and with Maes Howe nearby.  Quite how all these sites are interlinked is still under investigation, but it is quite extraordinary to actually stand and watch archaeologists uncovering the past before our very eyes!

The diary here gives a daily account of the dig, written by various of the volunteers, students and archaeologists working on the site. Some "art" has been found, and painted stones, possibly the earliest examples of painted stone in Europe.

The Ness of Brodgar dig is directed by Nick Card of the Orkney Research Centre for Archaeology (ORCA)
and it was he who gave us the "tour".  His enthusiasm knew no bounds as he walked and talked us round the site - despite driving rain!  As a "spectator" I could feel the energy and excitement around the dig. I wanted to grab a trowel and have a go myself!  As it was I settled for watching a young lass slowly revealing some neolithic pottery shards before my very eyes.  Magic!

It looks chaotic but I'm assured there IS order in the chaos!!  And you can see the site is really big. 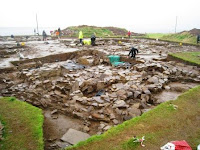 Some of the "dressed" stone 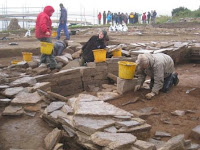 Nick Card explaining the work in this area - I wanted to ask - Should you be standing on a neolithic stone wall ?!! 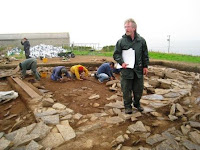 You can quite clearly see a "W" shaped wall appearing here 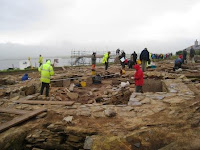 Here are just a few of the finds 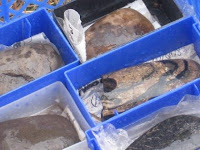 The BBC have also been filming, and the History presenter Neil Oliver was on site several days.  Apparently the dig will form part of a BBC broadcast this winter.
Posted by Sian at 18:23

Email ThisBlogThis!Share to TwitterShare to FacebookShare to Pinterest
Labels: Ness of Brodgar