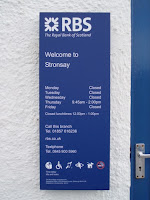 ...Orkney had The Otter Bank -  a floating bank which sailed around the North Isles visiting it's customers! It was run by the National Commercial Bank (now the Royal Bank of Scotland - oh do NOT get me started on THAT topic!).  But the RBS does still visit the isles on a weekly basis, only now it uses the small inter-isles planes. Above are the opening hours on the northern island of Stronsay and below is the bank! 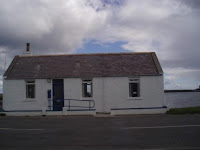 Anyway this is a trip down the past - below is a YouTube film (24 minutes) of the floating bank filmed in 1964, and as well as the bank you get a flavour for the Orkney Islands and the folk that live here. Some things have changed (apart from banking...sigh), but many things remain the same.