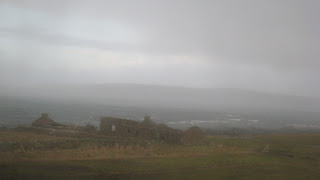 (Note: After some comments I'm making pictures larger on this blog. If it causes anyone problems please let me know!)

As a balance to all the sunny photos I post on my blog, I'll tell you about weather over the last month or so..... Apparently in December we had 8.4 hours of sunshine.......pause for a moment to consider that....and the fact that, in December, sun rise is about 9am and sunset about 3pm......sigh....

And then there's the wind.... you've heard about the storms, but we've barely had a wind free day. And I don't mean "a bit of a breeze" which, in Orkney is anything up to Force 6.  I mean gales that buffet you as you try and go about your daily business, even just getting in and out of the car is a challenge. Hang onto your doors! The cat flap is almost permanently battened.  Button and I have had to develop a signalling system so she can shelter out of the wind till I open the door on the less windy side to let her in..... thankfully she is an intelligent cat..... (though as she's been stuck outside sometimes when I've forgotten, she thinks less of my intelligence!).

Orkney winters ARE characterised by lots of wind and rain,but this year has been exceptionally bad. It HAS been very mild with temperatures rarely below 9 degrees centigrade. However the wind-chill factor makes it feel much colder. The forecast is for the weather to get colder next week.  I don't want *snow* - just some sunshine would be nice?  It probably doesn't help that the last Orkney summer was less than good - again more rain, grey skies, cool temps.  Ah well could be a lot worse!  But it is usually the Orkney winters that are the last straw for some "incomers".  I think it is said that incomers will stay either for three winters or forever. I've lasted 12 and have no intention of leaving Orkney. But I do long for the days when I can get outside and stand up without hanging onto something, go for a leisurely walk along the shore each day. Just the simple things!

As I look out the window I can see the "Hamnavoe", the ferry that runs between Scrabster and Stromness, coming "up the Flow" - which means it's windy out west on it's usual route and it's taken the slightly longer but more sheltered route through the islands up Scapa Flow.

But the days are lengthening....sun rise today (pah! what sun!) was at 8.56, and sunset is at 3.41. But I have plenty of work to keep me occupied and we are having an island Wii Bowling night tonight.

And there has been some sun this year 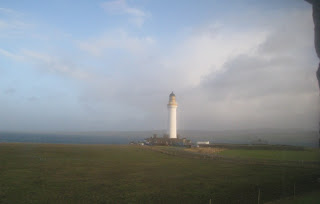 And there are signs of Spring! 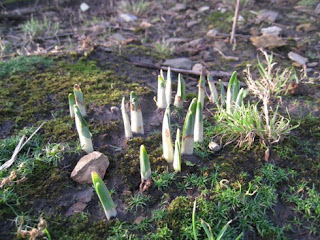